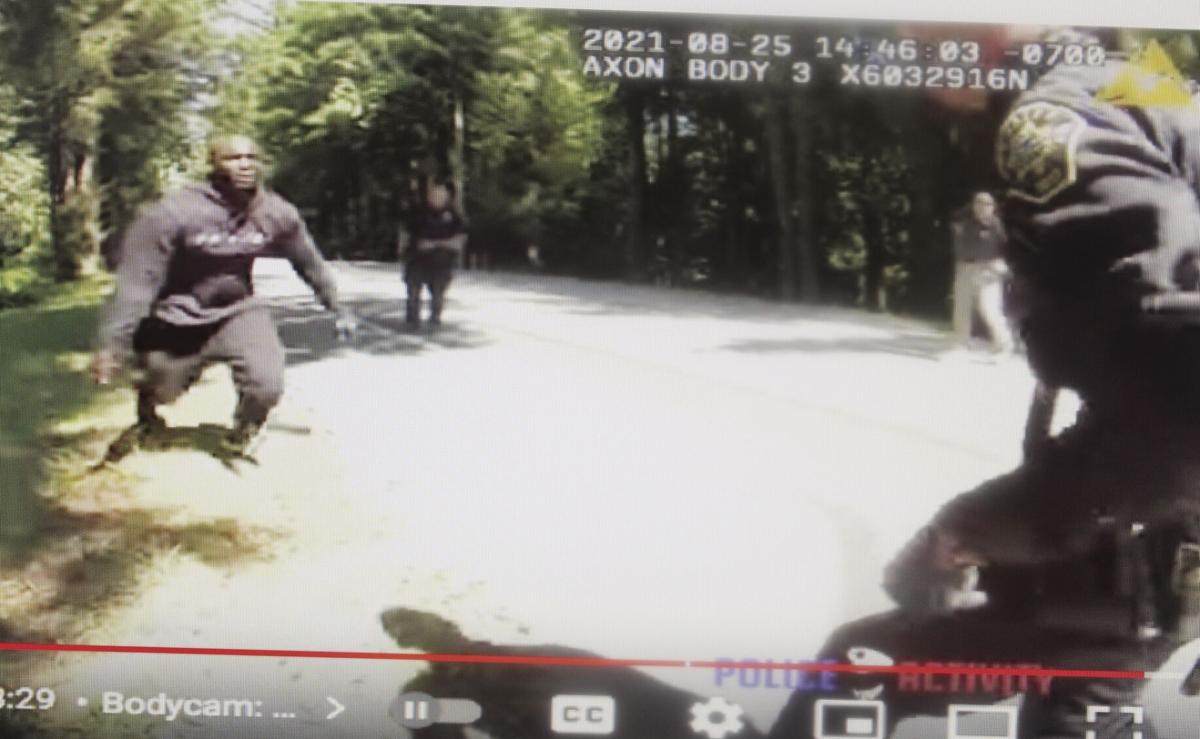 In this still frame from a bodycam video, Robert Anderson is seen running toward a sheriff’s deputy with a knife. 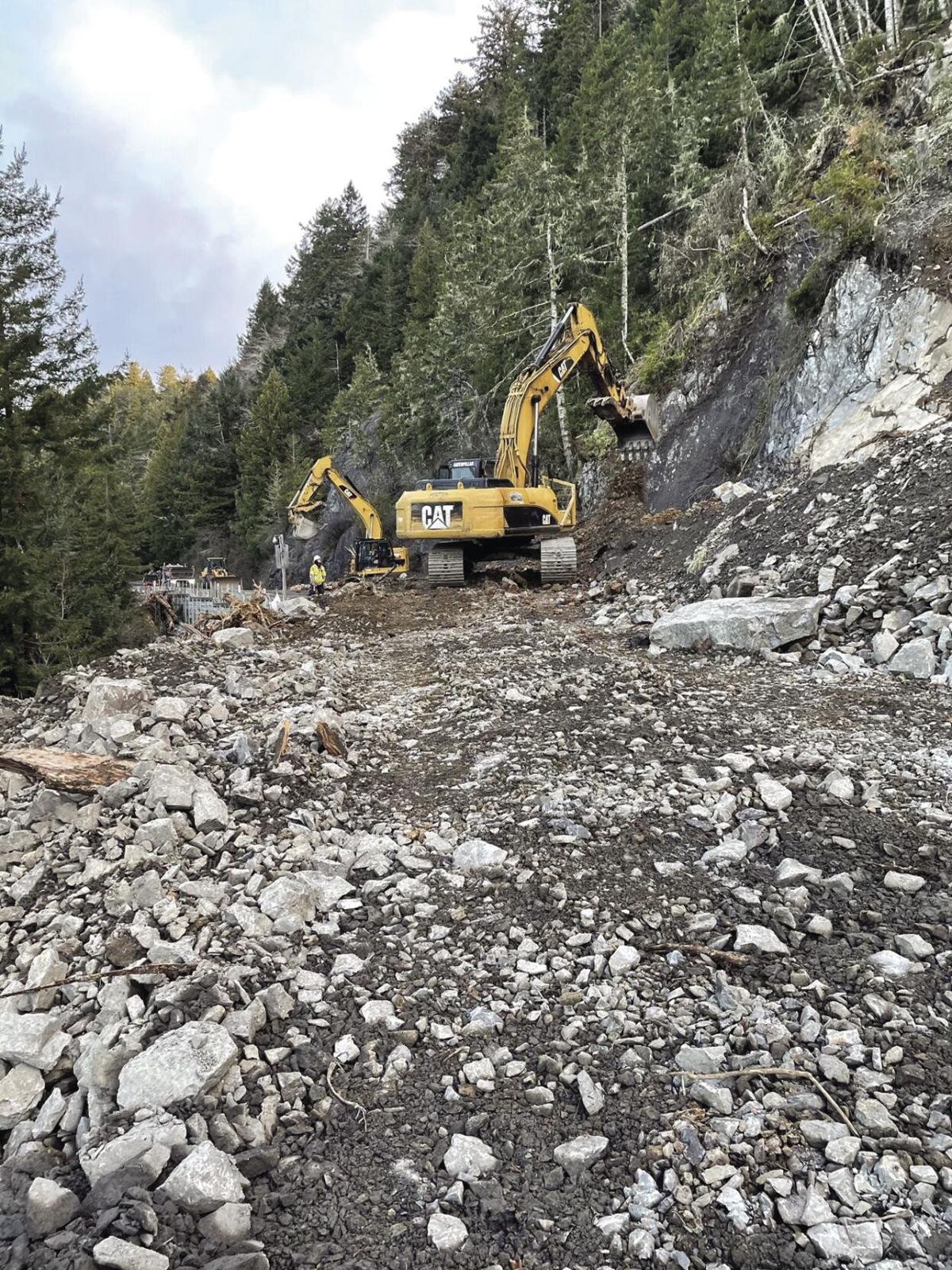 The stretch of Highway 101 known as Last Chance Grade ran into more problems in 2021 as a slide closed the road and caused months of delays. 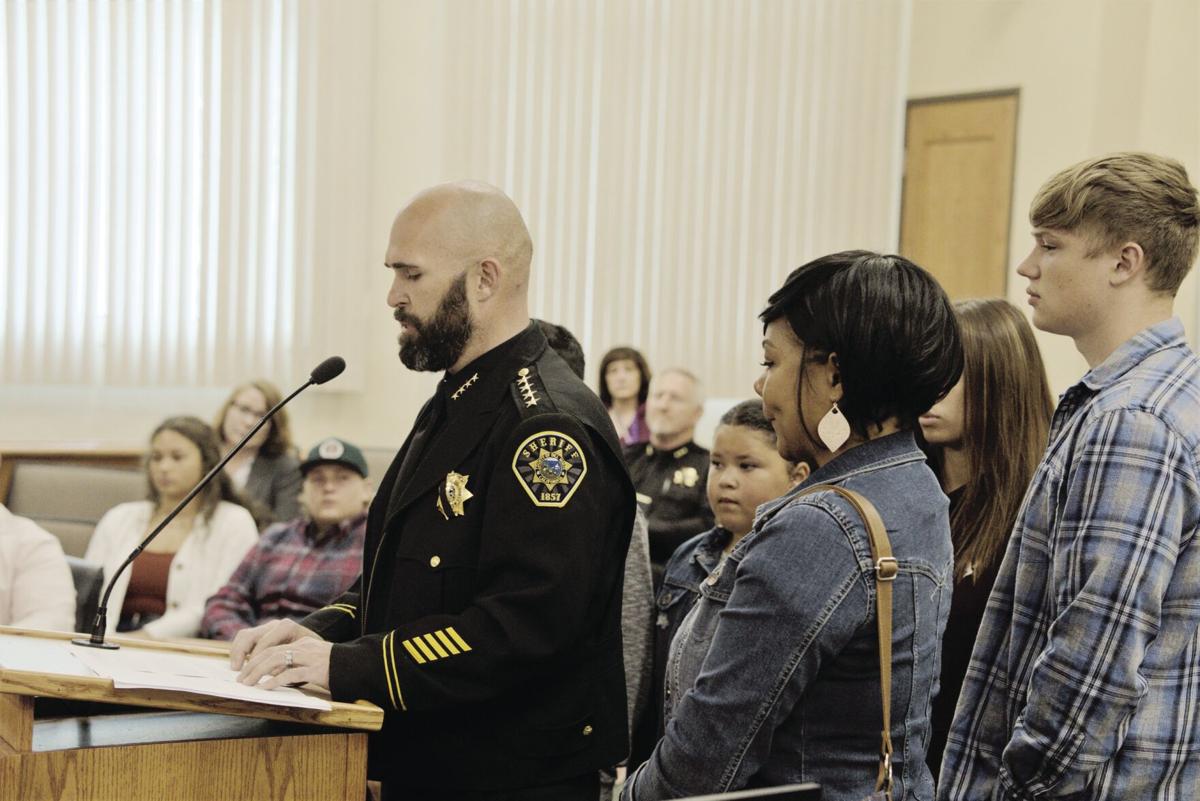 Surrounded by his family, Sheriff Erik Apperson announced he is stepping down as sheriff. Apperson began working in local law enforcement in 1998 and resigned Oct. 1. 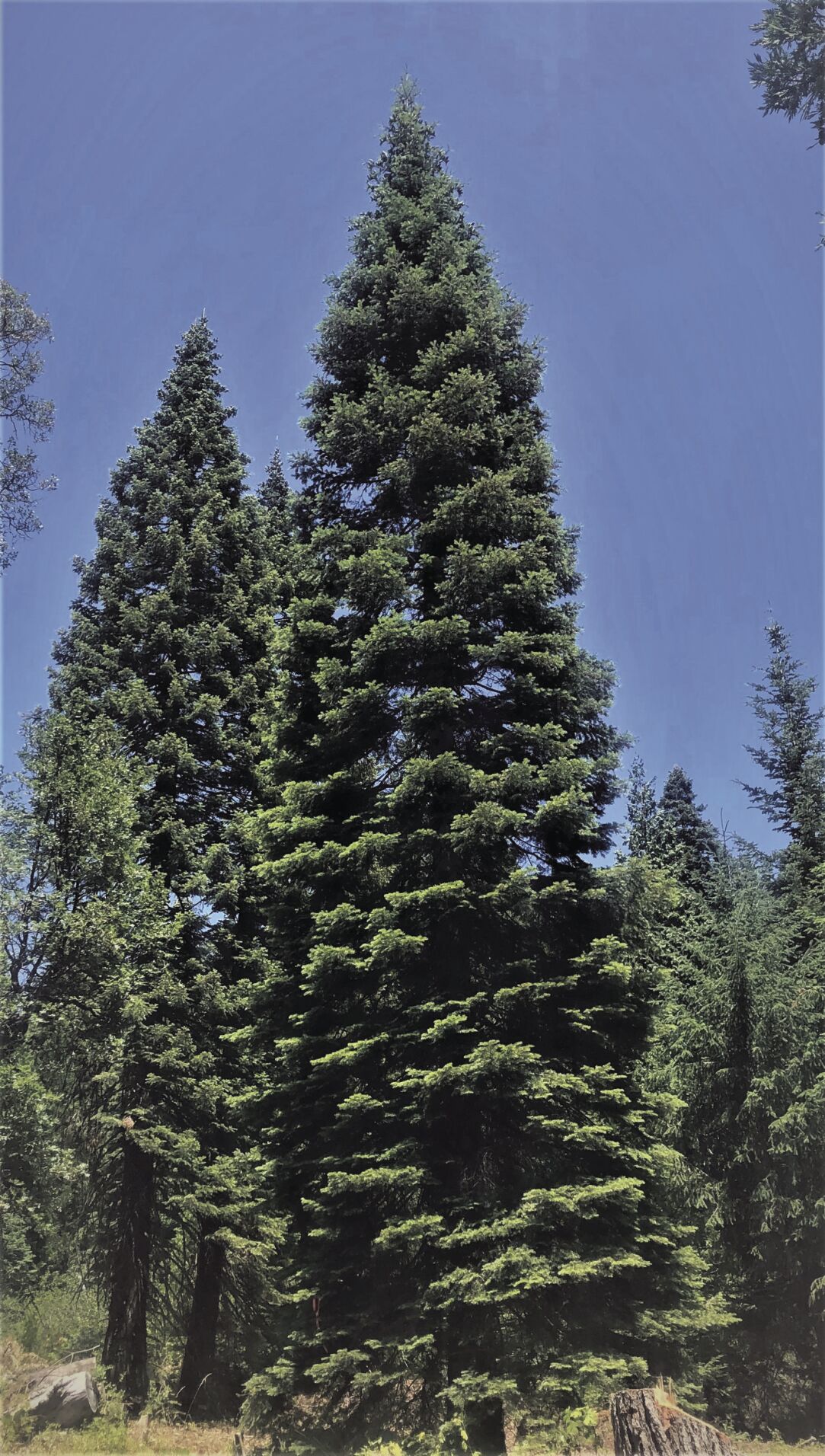 Sugar Bear, an 84-foot white fir, was selected as the U.S. Capitol Christmas tree. After being cut down, the tree began its nationwide journey with a stop in Crescent City.

In this still frame from a bodycam video, Robert Anderson is seen running toward a sheriff’s deputy with a knife.

The stretch of Highway 101 known as Last Chance Grade ran into more problems in 2021 as a slide closed the road and caused months of delays.

Surrounded by his family, Sheriff Erik Apperson announced he is stepping down as sheriff. Apperson began working in local law enforcement in 1998 and resigned Oct. 1.

Sugar Bear, an 84-foot white fir, was selected as the U.S. Capitol Christmas tree. After being cut down, the tree began its nationwide journey with a stop in Crescent City.

A 38-year-old man was shot and killed by Del Norte County Sheriff's deputies after he lune at a deputy with a knife.

The shooting took place in late August after deputies responded to the area of Parkway Drive and Sherwood Lane to a report of a disabled vehicle blocking the road.

When deputies arrived, they found 38-year-old Robert Anderson with a large knife. In bodycam video of the incident released by the sheriff's office, Anderson tells deputies he has a knife and pulls it out.

After talking for several minutes, Anderson turns to someone off screen, asking if they are filming the incident. He then reaches down, grabs the knife and runs toward the nearest deputy. Anderson slashes at the deputy as he passes, and gunshots then ring out.

After putting Anderson in handcuffs, deputies attempted to tend to his wounds until an ambulance arrived. He died from the gunshot wounds.

Long closures at Last Chance Grade finally came to an end in August, as did the environmental scoping phase that seeks a more permanent solution to the eroding stretch of highway nine miles south of Crescent City. There are currently two possibilities to dealing with the problem: A $1.3 billion, two-mile tunnel that would take travelers inland and would lead to the decommissioning of that stretch of U.S. 101 or rerouting the highway inland 130 feet along and adding retaining walls and water diversion tactics. Caltrans District 1 representative Jaime Matteoli updated local government officials about the project in late November, and stated that by reducing the options to fix Last Chance Grade from seven to two in the environmental review and impact statement phase, the anticipated completion date has been bumped up a year to 2038. If the tunnel is built, it would be about 10,000 feet long and would be the higher cost alternative, but would also have the least risk and best longevity rate - at least 70 years. “We found that this tunnel alternative is the best way to avoid all the landslides,” stated Matteoli to the Crescent City Council on Nov. 29. The EIR will also study a “No Project Alternative” - which would entail no long-term alternatives and would be a continuation of ongoing maintenance and repairs - though that option is not favored. About $85 million has been spent to repair the highway since 1997. The environmental phase of the project is expected to take at least three more years. Draft documents, permitting and agency coordinations once a preferred alternative is selected and public hearings will continue into 2025. After that, Caltrans hopes to pull final construction permits, purchase the land to complete the project and begin construction by the year 2030. Construction is anticipated to take about eight years to complete.

We've all the heard the old saying that every vote counts, but rarely does an election prove it right.

Over the summer, the Crescent City Fire Protection District held an election asking voters to raise taxes to fund the district. After two counts, the assessment passed by the narrowest of margins, with 50.01% in favor and 49.99% opposed.

The additional funds being collected after the election are slotted to hire more paid positions in the district while having 24-hour coverage with volunteer firefighters. If the assessment had failed, the district would have had to reduce the amount of space it covers.

Surrounded by family, Del Norte County Sheriff Erik Apperson announced his resignation at a Del Norte Board of Supervisors meeting, effective Oct. 1. According to Apperson at that meeting, he and his family decided to move out of Del Norte because they discovered their medical needs could not be met in the county. He also said he would be pursuing a career change outside of law enforcement. Though not necessarily related, the Sacramento Bee published a scathing article two weeks later that claimed several cases of employee misconduct within the sheriff’s department, including a correctional officer allegedly spraying a mentally-ill female inmate with pepper spray, as well as an allegation that one of its employee’s had a sexual relationship with a minor participating in the department’s teen program. Apperson’s career in law enforcement began in 1995 as a volunteer for the Explorers Program at the sheriff’s office. In 1998, he began getting paid for it as a correctional officer at the juvenile hall, and later the Del Norte County Jail. In 2000, he was hired to the Crescent City Police Department and began his duties in 2001 after graduating from the police academy. In 2014, Apperson was elected as sheriff and was sworn-in the following year. He became the youngest sheriff in the state at the time at 36 years old. In 2018, he was re-elected but did not complete that four-year term. Sheriff Randy Waltz is serving out the duration of Apperson’s term and announced recently he is running for the seat in 2022.

Del Norte County continued to face severe housing shortages in 2021, though proposed local zoning modifications that would allow property owners to build accessory dwelling units, a modest investor-related housing project and the purchase of a local motel that will be converted to permanent housing may bring some relief. Two years ago, the California Commission on Access to Justice identified Del Norte County as one among six counties in the state with the “least habitable housing.” Also, just one-third of Crescent City families reside in their own homes. In September, Gov. Gavin Newsom signed “The Duplex Bill,” or SB 9, to address the housing crisis in California by allowing lot splits to occur that would make way for up to two dwelling units on each piece of property. Almost immediately, the Crescent City planning commission held its own workshops to explore the possibility of accessory dwelling units, also known as granny flats, and approved the concept in late October. A couple of weeks later, a semi-retired contractor also received swift-approval from the planning commission to build up to 10 residential units on a 27,599-square-foot lot on 4th Street. A nod of which that could spur more investors to pursue housing development in the future. For individuals experiencing homelessness, a Project Homekey Grant that allowed Del Norte Health and Human Services to purchase The Legacy at 665 L Street in 2020 has started converting the property into permanent housing through the construction of kitchens in each of the 30 units, plus laundry capabilities. That project is slated to be completed in the fourth quarter of 2022.

In April, a 22-year-old man was found unresponsive in the 200 block of Harding Avenue. After arriving at the hospital, it was determined the man had been shot, and he died from his injuries.

Near the end of the month, the Del Norte County Sheriff's Office arrested Neil Hiller, 33, for the murder of Joseph Deford.

Deputies used surveillance video and an anonymous source to link Hiller to the crime.

In June, Del Norte County reported more cases of the virus per capita than any other county in the state, and ranked 53rd out of 58 counties in vaccination rates. Four months later, the Crescent City Council penned a letter and nearly 350 students skipped school for a day in opposition to mandated vaccination policies imposed by Gov. Gavin Newsom. Del Norte vaccination rates increased by the end of 2022 to 52.3% (as of Dec. 8), but that’s still below the 55% end of year goal set by the Del Norte County Public Health Department the 71% average vaccination rate of the state. COVID-19 has claimed the lives of 41 Del Norters as of Dec. 27.

Sugar Bear, the 84-foot white fir selected as this year’s U.S. Capitol Christmas Tree, drew scores of people to Crescent City on Oct. 29. Up to 900 students stood in front of Sugar Bear - which was carefully nestled and decorated inside a 102-foot-long cab prior to its 10-day ride to Washington D.C. - to take pictures and wander amongst the many festivities scattered across park-grounds off Front Street. Mary Peacock Elementary fifth-grader Michael Mavris may have been the true-star of the season, however. Mavris was chosen for the high-profile position of lighting the tree after his essay ‘Six Rivers, Many Peoples, One Tree’ won first place in a contest that drew 53 submissions.

Twenty-year-old Gage Rowen Brassfield is scheduled to be arraigned Jan. 6 after allegedly trying to enter into a home that was occupied by a woman and at least one child on Dec. 4. According to Crescent City Police Chief Richard Griffin, the incident happened on the 500 block of Pacific Avenue. A loaded short-barreled AR-style pistol was found in a bush shortly after his arrest. According to Griffin, Brassfield had a long-standing dispute with another man who was not home at the time of the incident. The day after Brassfield’s arrest, Griffin stated that attempted second degree murder charges would be pursued. However, current charges range from second degree burglary to carrying and exhibiting a loaded and unregulated firearm.

In March, a 41-year-old Crescent City man was convicted of murdering his parents and was sentenced to 15 years to life in prison.

Casey Potter was arrested two days later and was found with a loaded firearm.