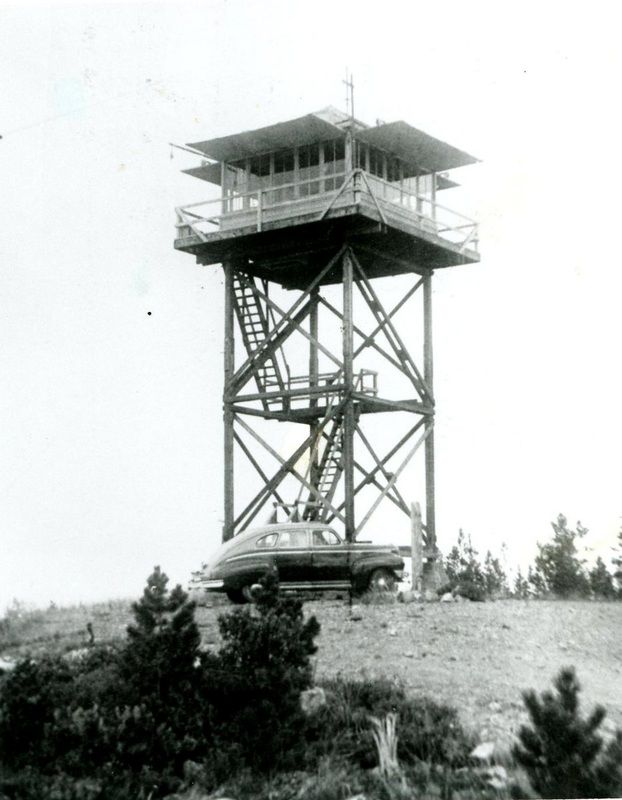 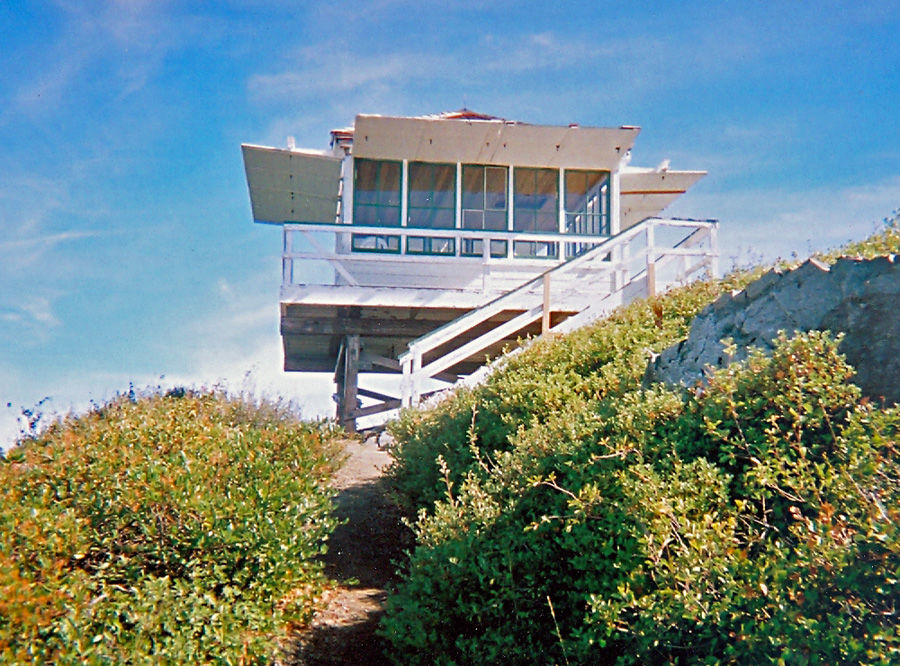 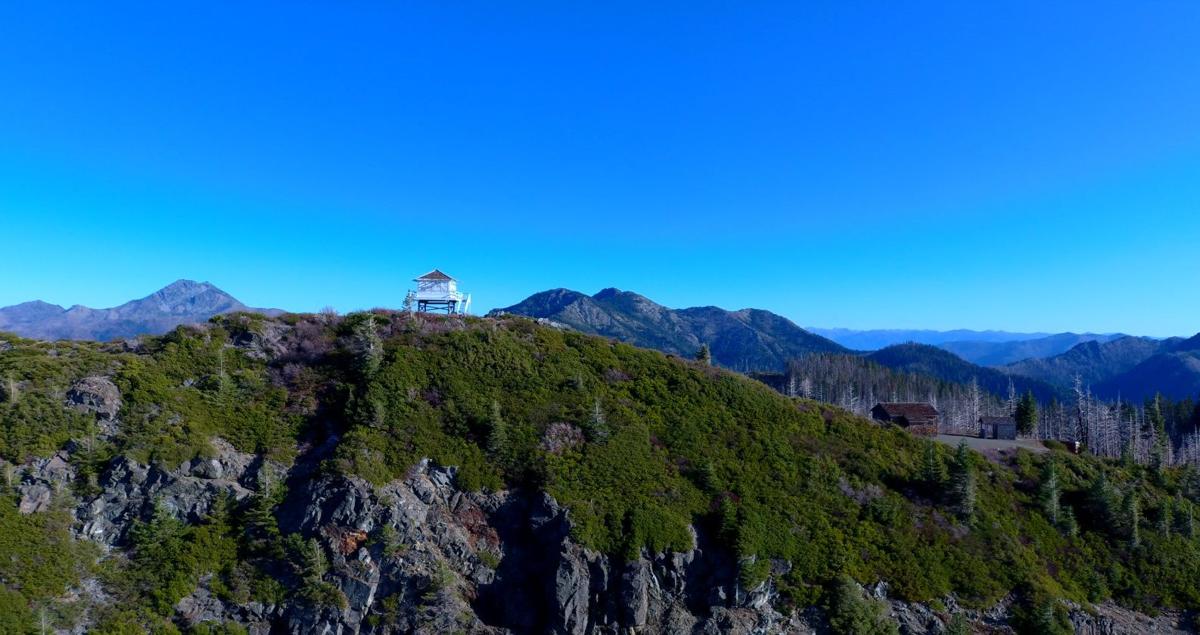 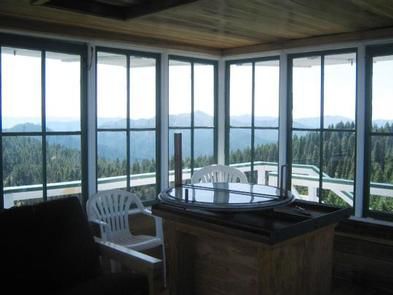 Gasquet resident Mike Cuthbertson is among an international clientele looking for an out-of-the-ordinary camping experience.

About a decade ago, he learned of the opportunity to stay at a restored fire lookout atop Bear Basin Butte. Its isolation and lack of amenities - running water, power - might scare off the typical weekend camper. Indeed, the U.S. Forest Service recommends getting there by four-wheel-drive vehicle.

It’s about 21 miles as the crow flies from the Smith River National Recreation Area Visitor Center in Gasquet … although it takes more than 2 and a half hours to get there through winding, old-growth forest roads with numerous long, washed-out sections.

For Cuthbertson, however, the payoff is worth the effort. “It has a fantastic view. It’s a magical place, up there,” he said.

Bear Basin Butte is a two-for-one rental. The site comes with a cabin that sleeps about eight, and a lookout with a 360-degree view of endless, beautiful wilderness.

Cuthbertson said the cabin comes with an outhouse, a barbecue, books, board games and a whole bunch of other stuff, including some reading material about the facility’s history.

The original lookout, at 14x14 feet, was built in 1924 on Bear Basin Butte. As a precaution against electrocution by lightning, the bed springs were rope instead of wire, and the furniture feet were cupped with glass insulators.

Nevertheless, the lookout was hit by lightning in 1936 and subsequently razed.

The Civilian Conservation Corps (CCC) had built a second lookout in 1934 at Old Camp Six, a peak about one mile east. That building sat atop a 30-foot, open-timber tower. It served for many years, until decommissioned as a lookout due to aircraft and increased numbers of forest visitors reporting fires.

In 1991, Camp Six Lookout became eligible for the National Register of Historic Places for its range of history and design qualities.

“I think it is amazing that this historic structure was saved from demolition and repurposed to keep history alive, and allow the public to experience it rather that see pictures of what used to be in some history book,” Serret said.

“Our archeologist provided me some information on that fact that it was a member of the public that was the impetus for saving the structure and who proposed the idea to the Forest Service,” she added.

Inspired by his stay at Robbs Peak Lookout in California’s Eldorado National Forest, Bill Pierson, of Pierson Building Center in Eureka, proposed partnering with the Six Rivers National Forest to provide a “peak experience” for residents and visitors to California's north coast.

After scouting several possible locations, Bear Basin Butte was chosen. That's when the idea was hatched to relocate the beleaguered Camp Six lookout.

“I think this is evidence that great ideas and success come when we work together,” Serret said.

No longer eligible for the National Register of Historic Places because it had suffered significant vandalism, the lookout was carefully disassembled and moved to Gasquet. The following year, it was reassembled at Bear Basin Butte and refurbished, retaining as much of the original fabric as possible.

Special footings were drilled deep into the rock to securely anchor the lookout to its new location.

The Pierson group, in keeping with the CCC-era lookout, modified a 1935 Forest Service standard plan for a combination garage/toolshed and constructed what has since been dubbed “Pierson Cabin.”

The cabin and lookout were dedicated on Sept. 12, 1997, with public rentals starting in the 1998 season.

The lookout sits perched on a rocky mountaintop within the Bear Basin Butte Botanical Area on the edge of the Siskiyou Wilderness, with vistas of the rugged Siskiyous to the east, the Kalmiopsis Wilderness to the north, the South Fork Smith River watershed to the south, and the Pacific Ocean to the west.

The Smith River National Recreation Area has more than 75 miles of hiking trails, several of which take hikers to many additional miles of wilderness trails.

The Doe Flat Trailhead is only 3 miles from the lookout. The trail provides access to Buck Lake, the Devil’s Punchbowl and the Clear Creek Recreational trail in the Siskiyou Wilderness.

From the lookout, visitors may spot a migrating bald eagle or a Pacific fisher, a member of the weasel family. The cabin comes with checklists and books to help identify the sightings.

Serret said Bear Basin Butte’s isolation, yet easy access to divergent terrains and ecosystems, are exactly what makes it popular with renters. That’s why booking dates are quickly filled six months in advance. The rental is available only from July 1 to Sept. 30 annually.

“People from all over the country and the world will travel to see amazing places. I know, as I am one of them. The people who rent the lookout and cabin are not primarily local folks living in the area,” she said.

Serret said to use recreation.gov to make a reservation as soon as they open on Jan. 1.

“People in time zones ahead of us have an advantage. But people cancel, so checking recreation.gov often for cancellations may increase chances of securing a reservation,” Serret advised.

That said, anyone trying to making a reservation will have to compete with Cuthbertson. “I’m going to try get there again this summer,” he said. “It was just too beautiful.”