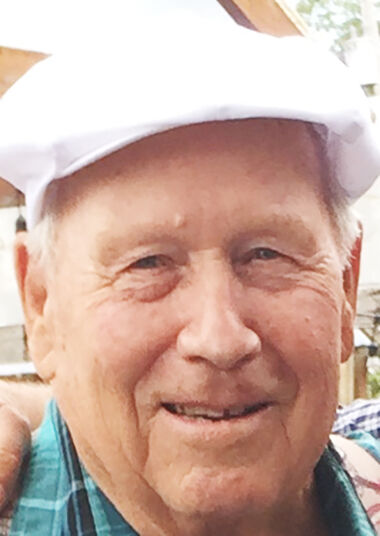 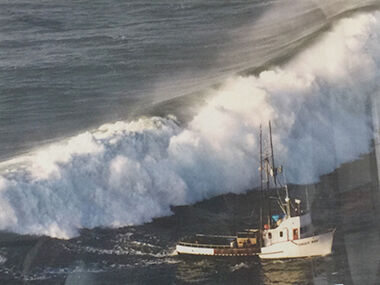 Art was born in Whittier, California, on Aug. 11, 1929 to Glen and Evelyn McCune. The family moved to Grants Pass when Art was about four years old. Art attended school in Grants Pass.

When Art was about 16 years old, he and a friend went on a road trip to San Francisco. They both obtained jobs as coppersmith apprentices. This proved to be a very interesting job for Art for a few months. Returning back to school in Grants Pass, Art devised a copper homemade still in the country and was very popular with several of the high school boys!

As a young man, Art worked in the woods in Grants Pass for a couple of seasons falling trees. He also purchased the first chainsaw to come to the area and that saw is located in the Kerby Museum today.

Art rode his prized Indian motorcycle to Crescent City several times with a couple of friends in the 1940s. Art learned of the commercial fishing industry in Crescent City. in the 40s. Later he returned in early 50s, going commercial crabbing out of Crescent City.

He could be considered a pioneer in the commercial fishing industry always exploring new fishing grounds and made commercial fishing his lifetime career! Art fished salmon, albacore, and crab seasons. He also obtained a squid permit and did research for squid in southern waters for the fish and game. Art fished king crab in the Bering Sea in the early 60s. Art owned the fishing vessels, Falcon, We, Pacific Sea and Sally Kay.

Art loved the ocean and being “west of the driftwood.” He practically was born a fisherman, as his mother would entertain him in an old galvanized tub with a stick and line he used to “pretend fishing.”

Art was known as a “highliner” among the fishermen and was respected by all who knew him. Art was a legend in his own time and his name is known and remembered to this day by many in the fleet of fishermen. Art retired in 1989 and sold his last f/v “Sally Kay” in Eureka, California. He continued to fish the rivers with his jet boat and wife Mary. He also fished on the ocean with son-in-law, Ed.

Art was offered a job in Brazil in early ‘50s, leaving his f/v Falcon for his Dad and brother to fish out of Crescent City. In Brazil, Art was a boss of over 180 stevedores and only one or two could speak English or write their name. The workers basically spoke Portuguese, and were getting paid 3 cents an hour at that time. Art and his crew were working on the largest manganese mine in the world at that time, unloading materials for railways, etc., from ships without today’s equipment to work with. Art would engineer ways of unloading the ships in a timely manner. He was in Brazil for two years and returned home to the commercial fishing industry and his vessel the “Falcon.”

Art had a very dark green thumb and was known as “Farmer Art” to many young people visiting his pumpkin patch back in the 1990s. He owned and grew all the pesticide-free veggies and flowers for wife, Mary, to arrange and sell to their loyal and friendly customers. They enjoyed growing, weeding, watering and spending many hours together in the field. Art’s garden was a source of abundant produce. Art was also a beekeeper for many years up until his passing. He received numerous compliments for the very best honey most had tasted. Art and Mary received many blue ribbons for their numerous Del Norte County Fair entries for veggies, flowers, honey and processed canned foods.

Art was an avid hunter from teen years up until his passing. Hunting cougars with his hounds in his younger years as well as birds with his retrievers. Some of his favorite hunting for elk and mule deer was in Eastern Oregon and Eastern California. We can’t remember a season that he came home empty-handed. He was an excellent shot and enjoyed reloading his own bullets.

Art and wife Mary enjoyed traveling through many states and countries. They fell in love with the desert and started traveling there in 1989 every winter with their travel trailer. They purchased a permanent place at Fountain of Youth Resort and have returned there every winter in the past years for three to six months, enjoying their “family of friends” there.

Art will be by our side and in our hearts forever.

The family will appreciate any emails of thoughts, memories or stories to share: You may send them to: desertsun4us@yahoo.com. Emails received will be forwarded to family members.

Due to Covid-19 his Celebration of Life has been postponed.

It's almost "Back to School" time. Do you think students should return to actual classrooms?