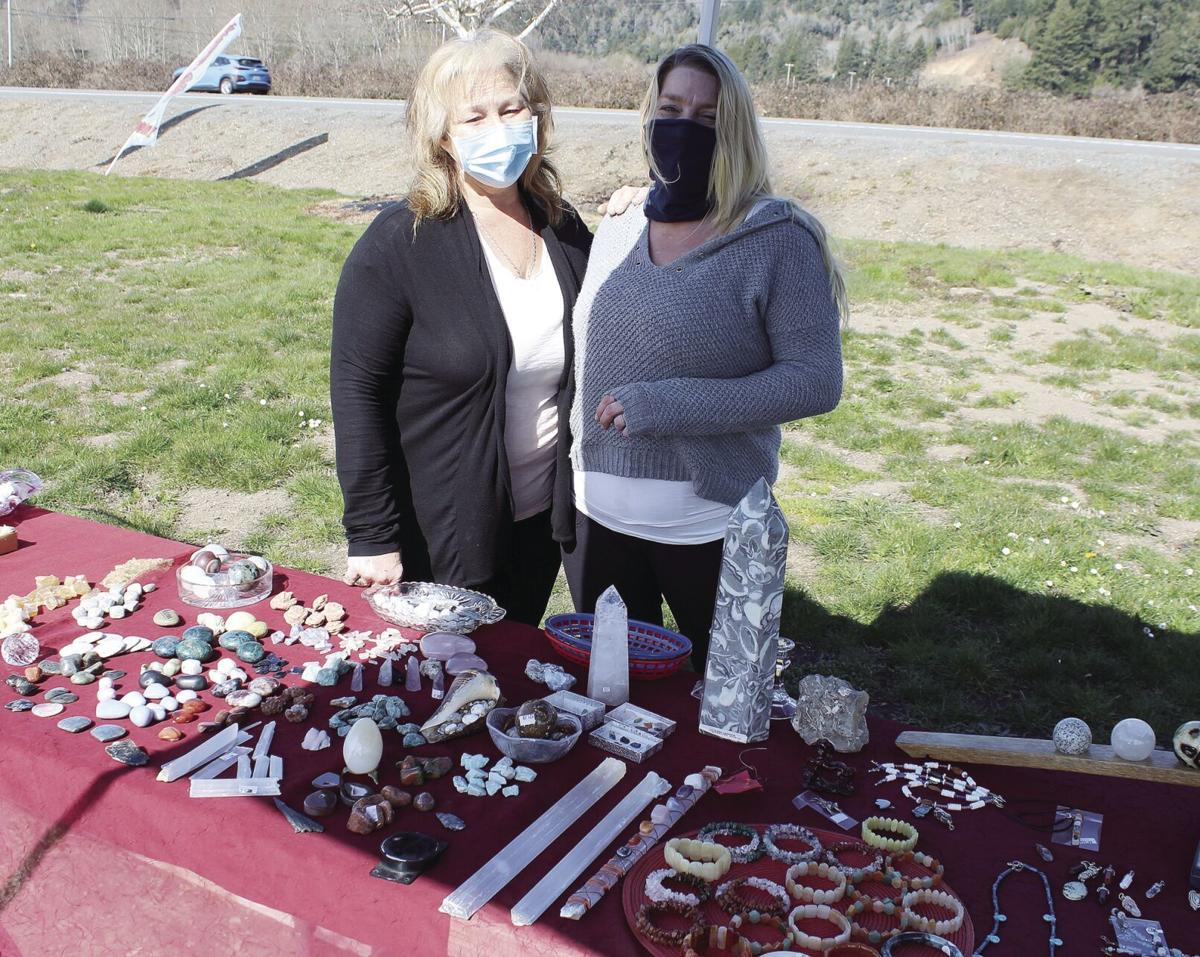 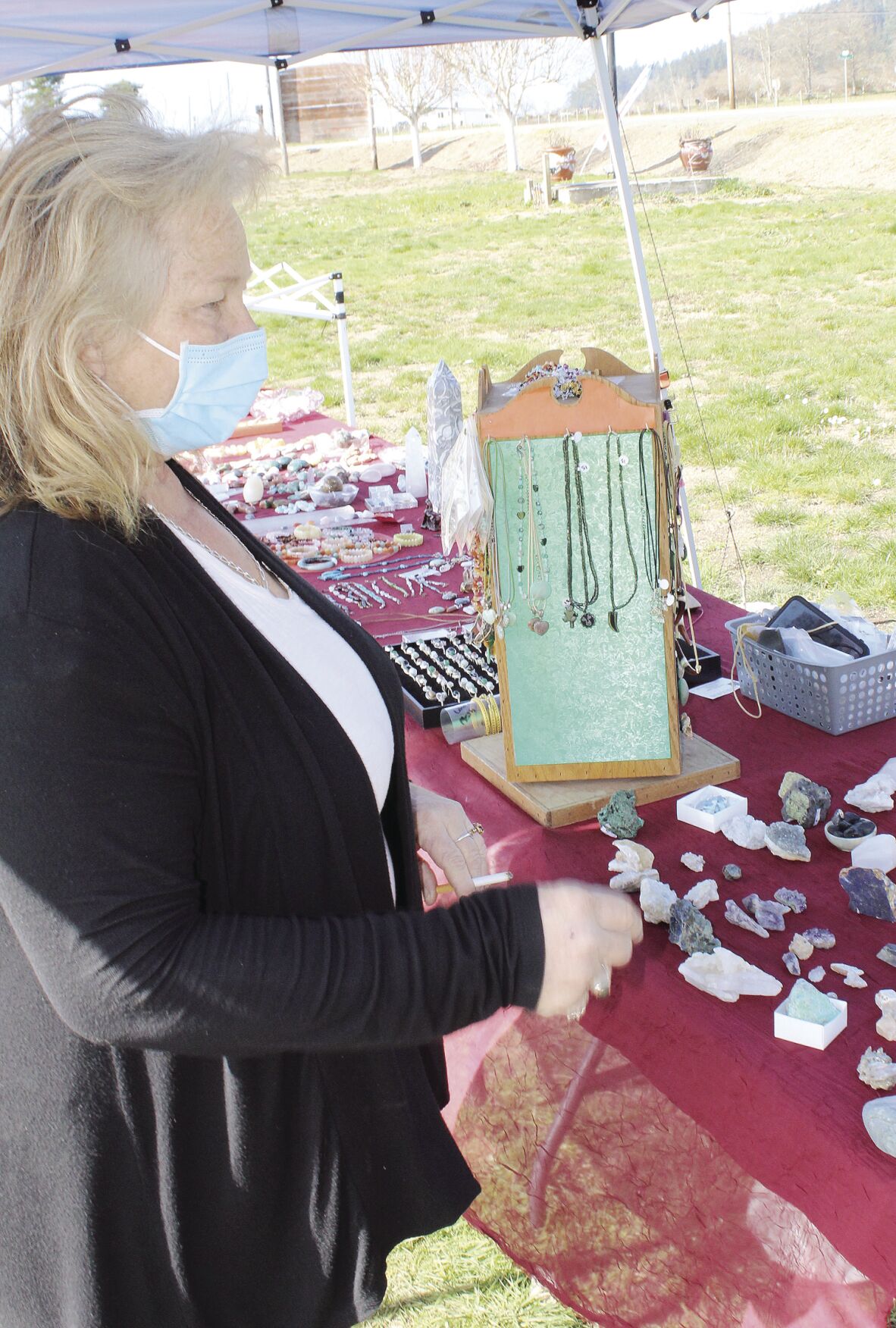 Sherri Bitting shows off some of the rocks and custom jewelry she offers at the store.

Sherri Bitting shows off some of the rocks and custom jewelry she offers at the store.

In 2016, Bitting came to Crescent City with one plan, see her dad. But that trip turned fateful in many ways.

“I was in Arizona, and in 2016, I came to visit my dad,” she said Saturday. “I went to the swap meet to sell some of my dad’s stuff. I met this man named Julian who was sitting in front of me. He invited me to go obsidian hunting in Oregon. I fell in love with rocks then.”

Bitting also fell in love with Julian, later marrying him and staying in Northern California. But the rocks quickly became her passion.

“Before that, I didn’t notice a rock,” she said. “But then Julian started taking me to the beach, and I saw these beautiful rocks. They have so much energy in them.”

Bitting not only loved the colors and shapes, as she studied rocks, she learned they have their own powers. Many crystals have healing powers, which Bitting knows personally.

“Every crystal does,” she said. “They are vibrating, and we are vibrating. We vibrate on the same frequency. It’s my understanding the rocks absorb the negative ions in our body. When I first started helping Julian, people would come up to the table and start handling rocks, and I said this is crazy.”

When Bitting came down with shingles, she struggled to get better. Then she learned of a rock that could treat the illness, so she gave it a shot. Overnight, the shingles dried up and fell off. Now, she doesn’t leave home without her crystals.

A few years ago, Bitting started selling rocks along the side of Highway 101, but when COVID hit, the state stopped all roadside sales. She found a new location in Smith River and opened her business, Love Rocks n Gems. She now sets up outside under a tent at the location on Highway 101 and Sarina Road. Being outside allows her to run her business under the COVID restrictions. Once COVID has waned, she plans to open a storefront at the same location.

Under the tent, Bitting offers rocks for a variety of reasons. Some are pretty, others have healing powers and some are things people just like to buy. Bitting also makes and sells her own jewelry in an effort to reach more people.

“Most people who stop are looking for healing or pretty or both,” she said.

Bitting said she hopes more entrepreneurs will join her at the Smith River location, saying it is an inexpensive way to try to reach customers.

Bitting said business is slow right now, but she is looking forward to the tourist season.

“It’s been very challenging, but I love it still. In the tourist season, it’s going to be obnoxious,” she said. “So, I hired a girl to help me out.”

On Saturday, Emily Wagy was helping, saying she wanted to pitch in because she, too, is in love with rocks. Sharing that enthusiasm with Bitting and people who stop by is refreshing, she said.

The top sellers at Love Rocks n Gems are spheres and hearts, with Bitting’s custom jewelry close behind.

Love Rocks n Gems is open from 11 a.m. to 5 p.m. every day the weather allows. If it’s raining or too windy, they are forced to close.