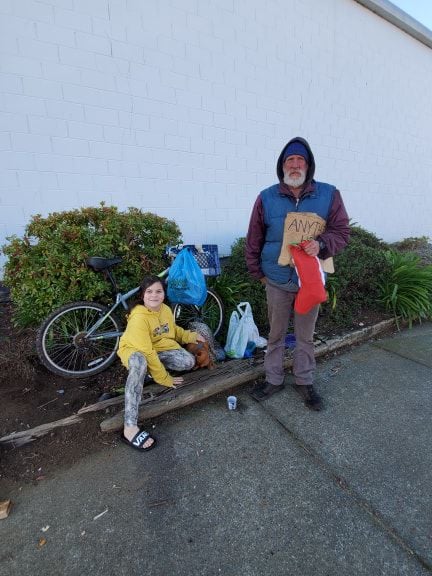 Skylar Lambeth, 9, visits with a homeless man and his dog after giving them a Christmas stocking. 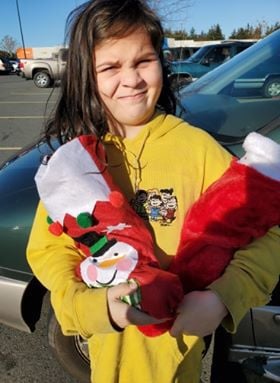 Skylar Lambeth, 9, shows off the care packages she saved up for all year.

Skylar Lambeth, 9, visits with a homeless man and his dog after giving them a Christmas stocking.

Skylar Lambeth, 9, shows off the care packages she saved up for all year.

Nine-year-old Skylar Lambeth made herself a promise last year - to help the homeless in Crescent City and Brookings during the holidays.

And this year, she followed through with what she had planned.

With money she collected from recycling, she prepared care packages to hand out to the homeless during the 2019 Christmas season.

“It makes me proud of her, thinking of others during times when they are having a hard time,” said her mother, Jeanette Lambeth. “She doesn’t just think of herself.

“She knows other people are having a hard time, and it’s just heartwarming to watch her do it.”

Throughout last year, Skylar collected her recycling and turned it in so she would have enough money to prepare her care packages.

She placed snacks, a water bottle, flashlight, batteries and a beanie inside Christmas stockings and passed them out at the Dollar Tree in Brookings and the Walmart store in Crescent City during the week leading up to Christmas.

“I felt bad for them, so I wanted to make care packages for them. So, I decided to do stockings, since it was Christmas,” said Skylar.

The idea came to her when she wrote an essay for her third-grade class last year about how to help homeless people in the community. By the time she had the idea, it was too late to pass out packages for last Christmas. So, she promised herself she would do so the following year.

And she made good on that promise.

Should Memorial Day events to honor veterans be exempt from shelter-at-home guidelines?

Two medevaced after crash on Highway 199

Two medevaced after crash on Highway 199