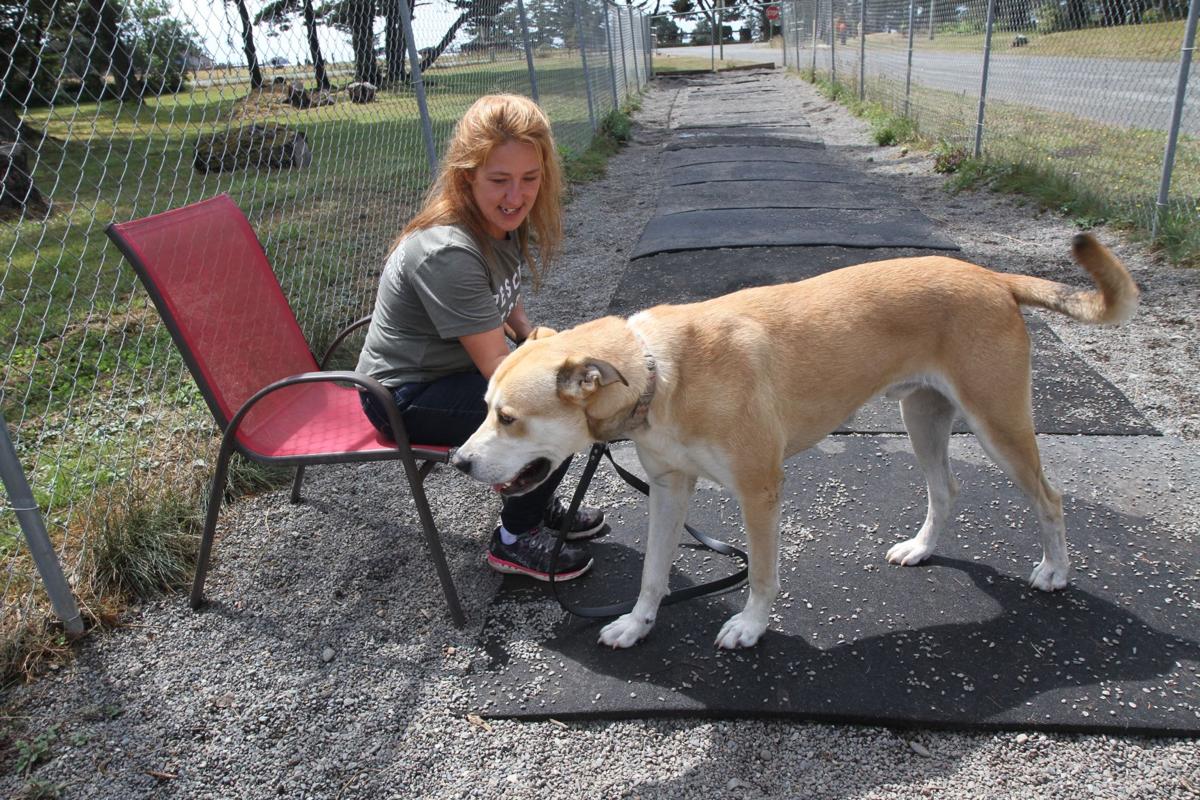 Starr is a Husky mix that’s been awaiting adoption at the Del Norte County Animal Control Shelter since January. Elis Dickson, the rescue and adoption director for Dogs of Del Norte, encourages Starr to stretch his legs in the tennis-ball run during an adoption event Aug. 10 at the shelter. 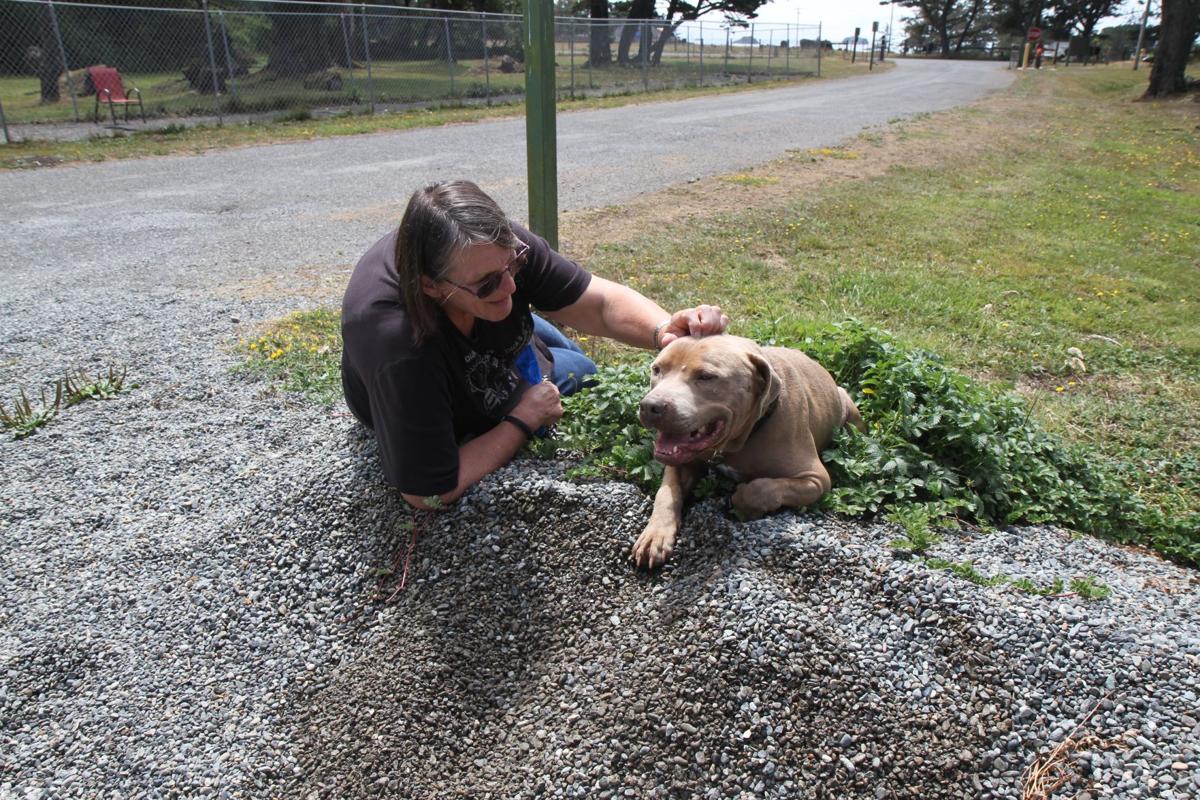 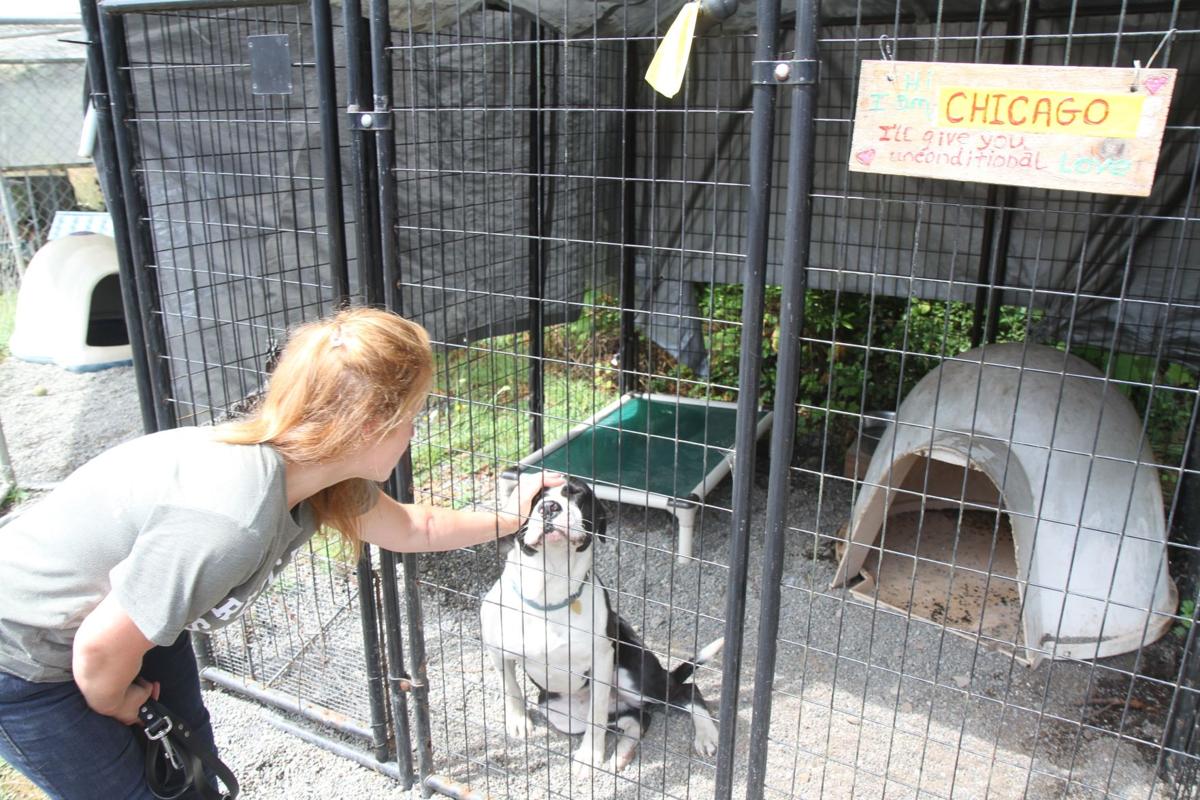 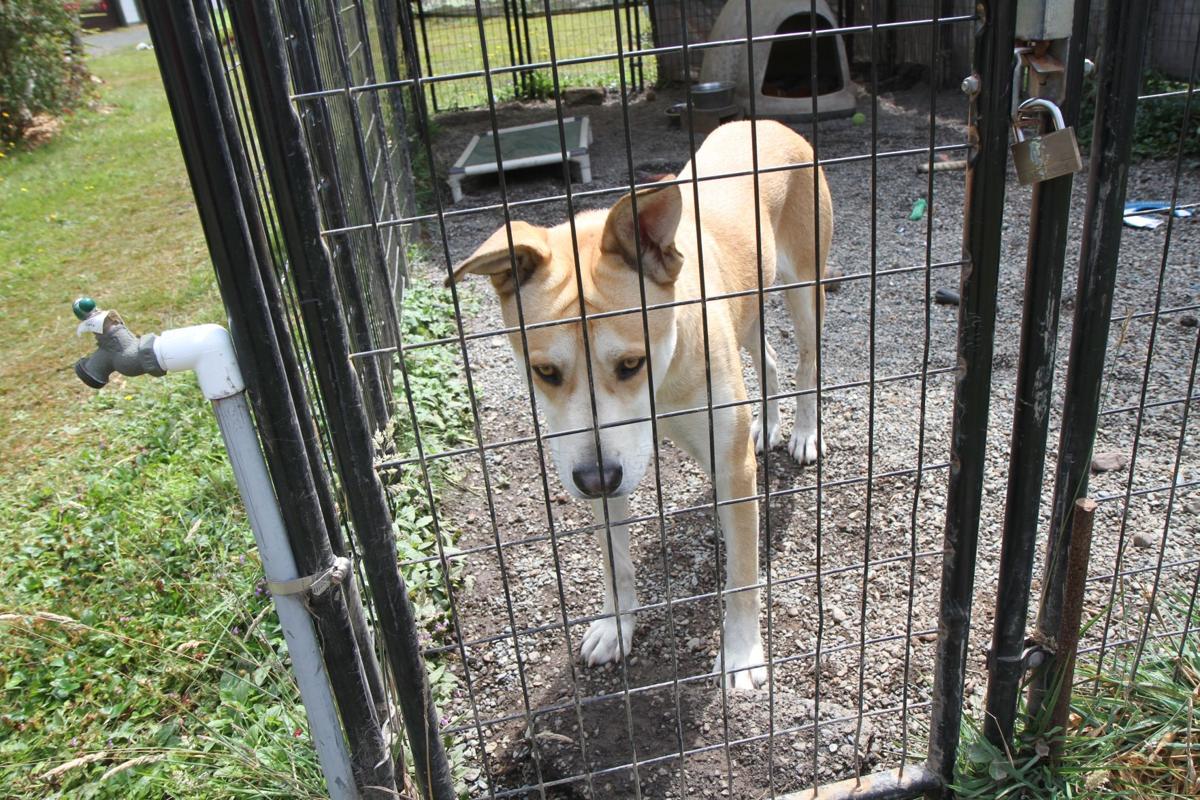 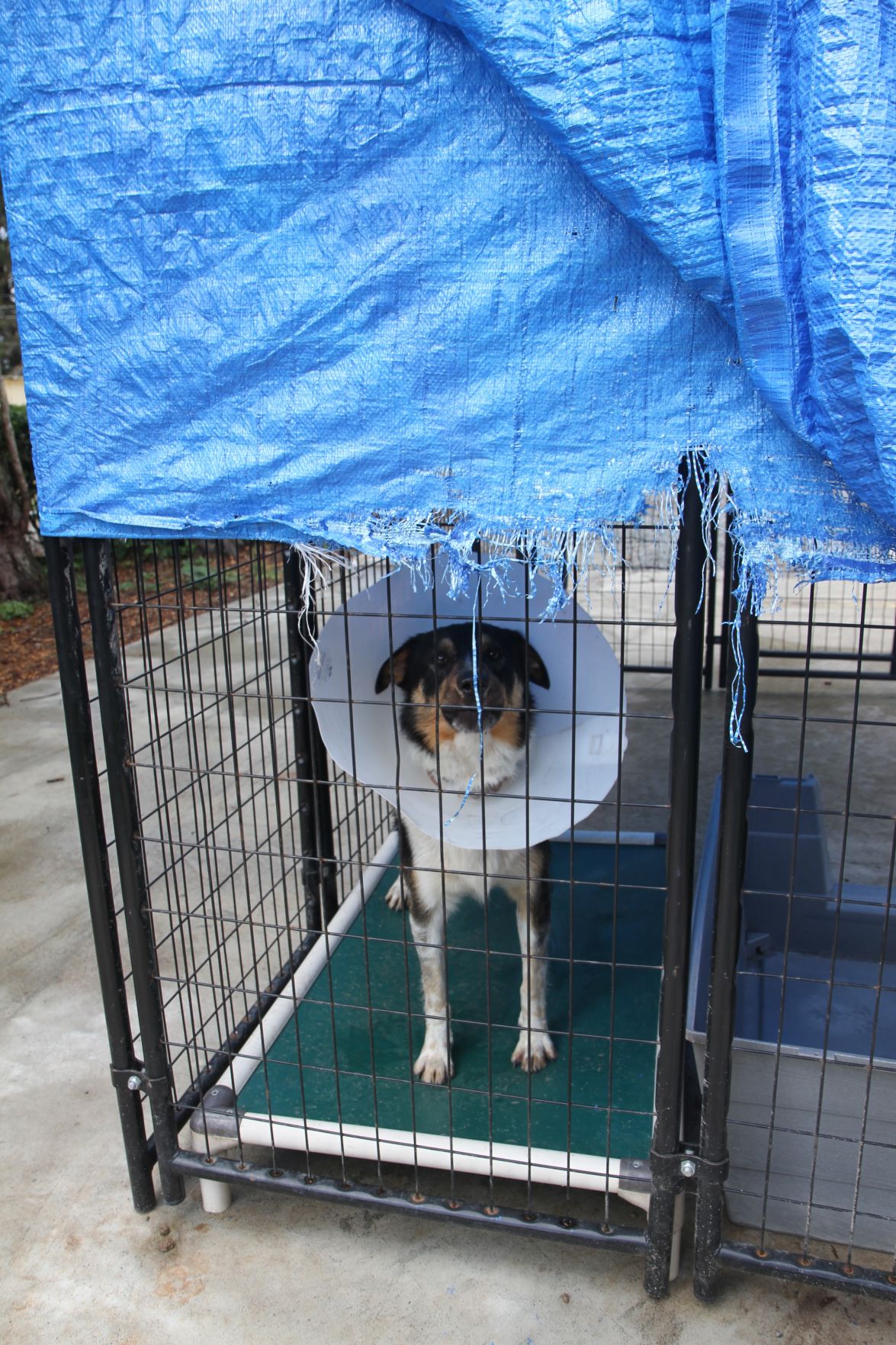 Starr is a Husky mix that’s been awaiting adoption at the Del Norte County Animal Control Shelter since January. Elis Dickson, the rescue and adoption director for Dogs of Del Norte, encourages Starr to stretch his legs in the tennis-ball run during an adoption event Aug. 10 at the shelter.

The Triplicate carries an Adopt-a-Pet full-page ad on alternating weeks that features photos of four-legged friends looking for a family. Why are there so many photos? Because local animal shelters are filled to capacity with rescued animals.

“We have 32 dogs right now,” said Justin Riggs, director of Del Norte County Animal Control. “That puts our building at absolute capacity. An optimal capacity would be 24.

Riggs said the Crescent City shelter’s staff keeps the dogs on site as healthy and as long as they can. He said animals are euthanized only for health or severe behavior problems. He estimated that 300 to 400 dogs are taken in over the course of a year, with only three or four needing to be euthanized.

The Del Norte County Animal Control Shelter, at 2650 West Washington Blvd., accepts dogs abandoned by their owners – say, when an owner is relocating and can’t move with the pet – as well as strays. Especially this time of year, Riggs said: “We get a lot of tourists that see a wandering dog and scoop it up and bring it to us.”

For the last couple of years, the shelter has seen a run of Nordic dog breeds, shepherds, Huskies and pit bull mixes.

Not to mention the “bully” breeds that are harder to adopt out: pit bulls, dobermans and rottweilers. “They’re good dogs,” said Riggs, “they can just be a little animal aggressive, needing extra-care handling or training.”

Riggs said the region’s stray-dog problem stems from owners who fail to have their pets spayed or neutered. The shelter will absorb that cost for perspective new owners, requiring only a flat adoption fee of $75, which is reduced to $30 for military veterans.

The shelter has an adoption event the second Saturday of every month, usually overseen by volunteers. The volunteers, Riggs said, help the dogs’ quality of life by taking them for walks, and feeding, training and bathing them.

Volunteers are always needed, be they serving as foster families or drivers who transport the dogs to other facilities. And, said Riggs, the shelter can always use help maintaining and fixing the kennels.

For their part, kids pitch in by writing dog biographies, taking photos and helping with the adoption events.

Married couple Scott and Lisa Miller have been volunteering at the shelter for four years and have fostered 40 dogs. “We love dogs,” said Scott Miller, “and just want to see them get good homes.”

He added that the couple fosters dogs in their home that are awaiting adoption because some dogs don’t integrate well with others at the shelter. That would describe Willie the chihuahua, their current foster pet. “Little dogs come to the shelter and just shut down around big dogs,” Miller said.

Elis Dickson, who volunteers at the county’s animal-control shelter, also serves as the rescue and adoption director for Dogs of Del Norte. She said some of the best-adjusted dogs the shelters see come from what might seem an unlikely source. “The homeless-population dogs are like the best,” she said. “They end up so adjusted to life.”

To find out more about Dogs of Del Norte, go to www.facebook.com/Dndogs707.

Shelter manager Eileen Bennett said that shelter has room for a maximum of 12 adult cats. Because many of those come in as expectant mothers, the shelter has 35 to 40 kittens available at any given time.

She said the Humane Society of Del Norte does not euthanize. “We’ll keep a healthy adult cat as long as it takes to adopt,” Bennett.

“Sometimes, (the cats) end up becoming the shelter mascot, if they don’t get adopted out. They’ve been with us so long, they end up loving everybody.”

The Human Society has a $50 adoption fee, which includes spay and neutering costs, updated vaccines, and a one-pound bag of food to take home along with the cat.

Unfortunately, that facility is in quarantine for another two weeks or so because of an outbreak of distemper in May, soon followed by a string of feline upper-respiratory and bacterial infections. Bennett said the facility has been completely disinfected, but the shelter has only a couple of kittens currently available.

She added that many of the shelter’s cats were found in the usual “dumping” locations; for example, in Crescent City on the beach along Front Street, or near the U.S. Coast Guard Station on Anchor Way.

Other cats at the Humane Society were found after they’d had litters under houses or in barns. Bennett added that feral cats occasionally are sought by clients because they make good barn cats that help control the rat population.