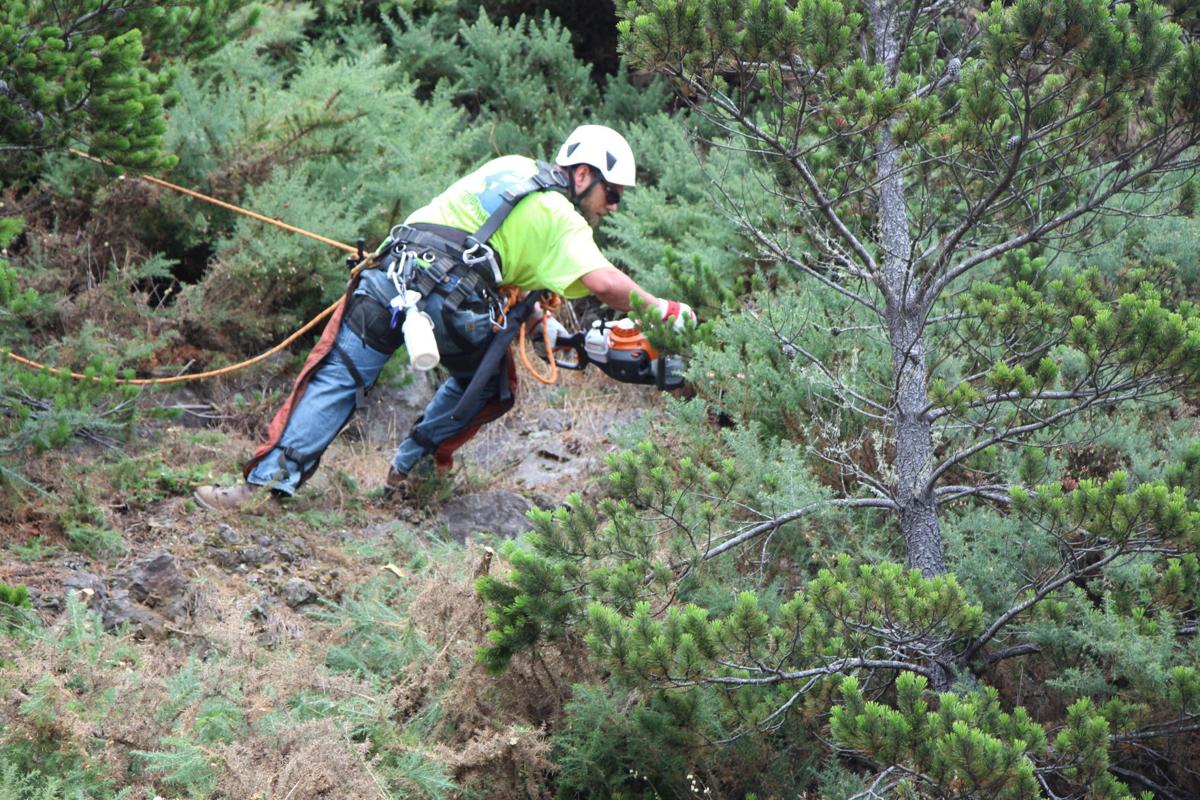 Triptych Construction, LLC worker Will Duffield reaches to pull out gorse from the cliff along Rainbow Rock north of Brookings. 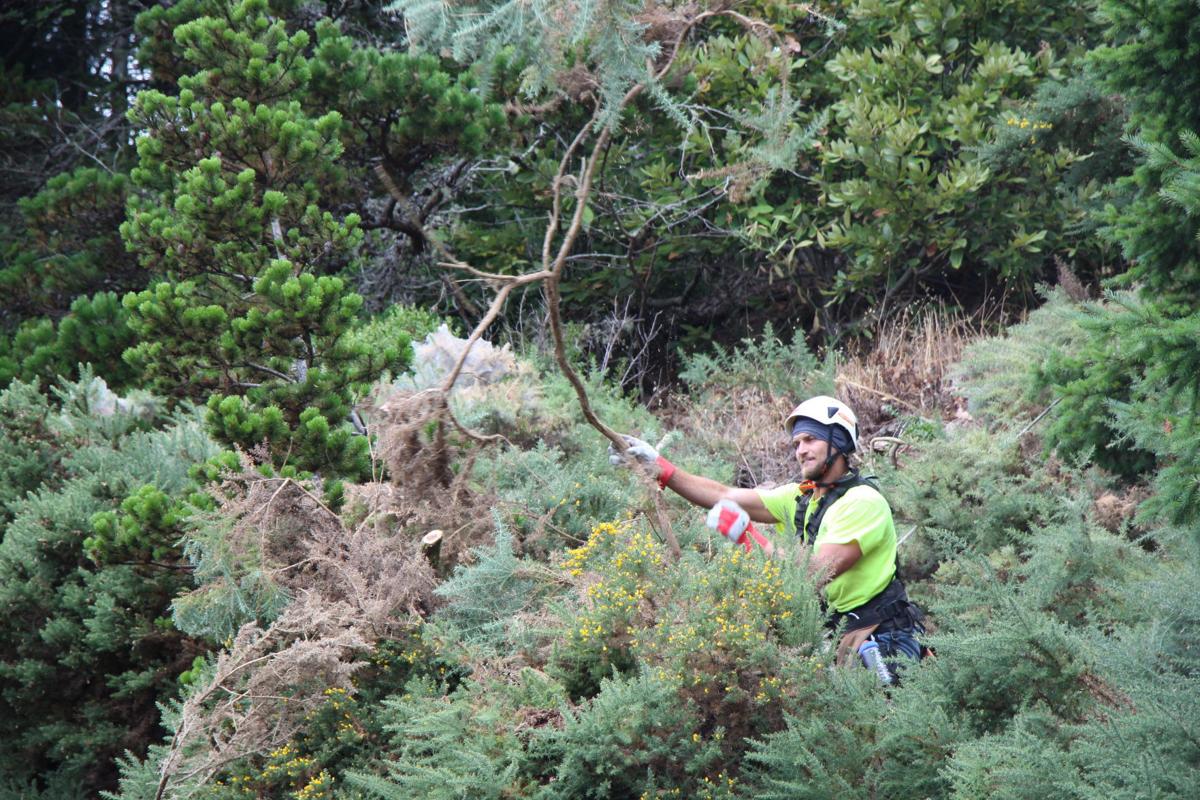 Triptych Construction, LLC worker Thomas Churchard tosses debris removed in the gorse eradication project along Rainbow Rock on the east side of Highway 101 near Harris Beach. 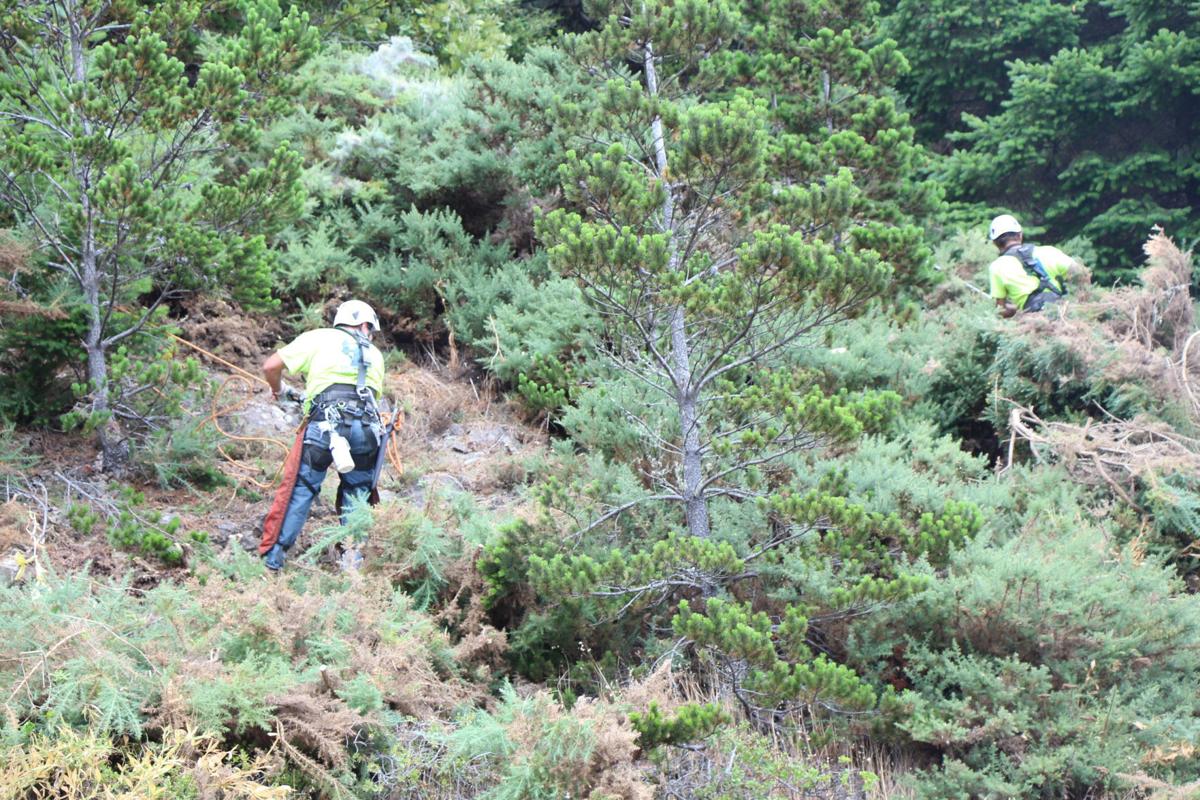 Will Duffield, left, and Thomas Churchard, of Triptych Construction, LLC, rappel down Rainbow Rock as they work to remove the gorse.

Triptych Construction, LLC worker Will Duffield reaches to pull out gorse from the cliff along Rainbow Rock north of Brookings.

Triptych Construction, LLC worker Thomas Churchard tosses debris removed in the gorse eradication project along Rainbow Rock on the east side of Highway 101 near Harris Beach.

Will Duffield, left, and Thomas Churchard, of Triptych Construction, LLC, rappel down Rainbow Rock as they work to remove the gorse.

Traffic in both directions on U.S. Highway 101, north of Brookings at Harris Beach, was routed around a worksite this week during an invasive weed-abatement project.

Two workers rappelled down Rainbow Rock, a steep cliff on the east side of the highway, to clear patches of gorse, a state-listed noxious weed that’s highly flammable and difficult to control once established, said Curry County Soil and Water Conservation District technical coordinator Erin Minster.

She said gorse seeds can remain viable for 30 years or more.

The work that began Aug. 19 was expected to last five days. ODOT is controlling nearby traffic and said there had been minimal delays.

The conservation district and the Oregon Department of Transportation (ODOT) have partnered to remove gorse on the steep cliff adjacent to U.S. Highway 101. Both organizations are part of the Gorse Action Group, whose mission is “to control and reduce the spread of gorse, minimize the impact of gorse on our economy and natural resources, and provide a successful process to share with others facing gorse infestations.”

Minster said gorse is found primarily in the Bandon area along the regional Oregon coast, although infestations have been found around the Harris Beach area north to Lone Ranch.

“The cliff removal is a demonstration project to gauge the efficacy of that proposed treatment technique,” Minster said.

ODOT has contracted with Triptych Construction, LLC of Glide, Oregon to conduct cliff work that includes rock scaling and brush removal on steep slopes. “The method involves workers on ropes rappelling their way down the cliff, removing the gorse bushes with power tools, then applying herbicide to the stump,” Minster said.

“This is known as cut-stump application, which greatly minimizes the amount of herbicide applied.”

Minster said the removal of gorse on steep slopes and cliffs had not been tried previously, “but the technique is needed at numerous sites along the Oregon coast.”

She said the cliff at Rainbow Rock was chosen as a good demonstration site.

“Gorse seeds can eject up to 30 feet from the bush, thus landing on the highway, allowing transport to other locales,” said Minster. “(Rainbow Rock) is a simple slope with one major plane, thus making for a more-simple approach. The location is highly visible, which makes it a good candidate for bringing awareness to the need for gorse control.”

The eradication project is funded primarily by ODOT, with additional funding provided by Wild Rivers Coast Alliance for documentation and monitoring. Specific cost figures for the project were unavailable at press time.

For more information about gorse, go to gorseactiongroup.org.