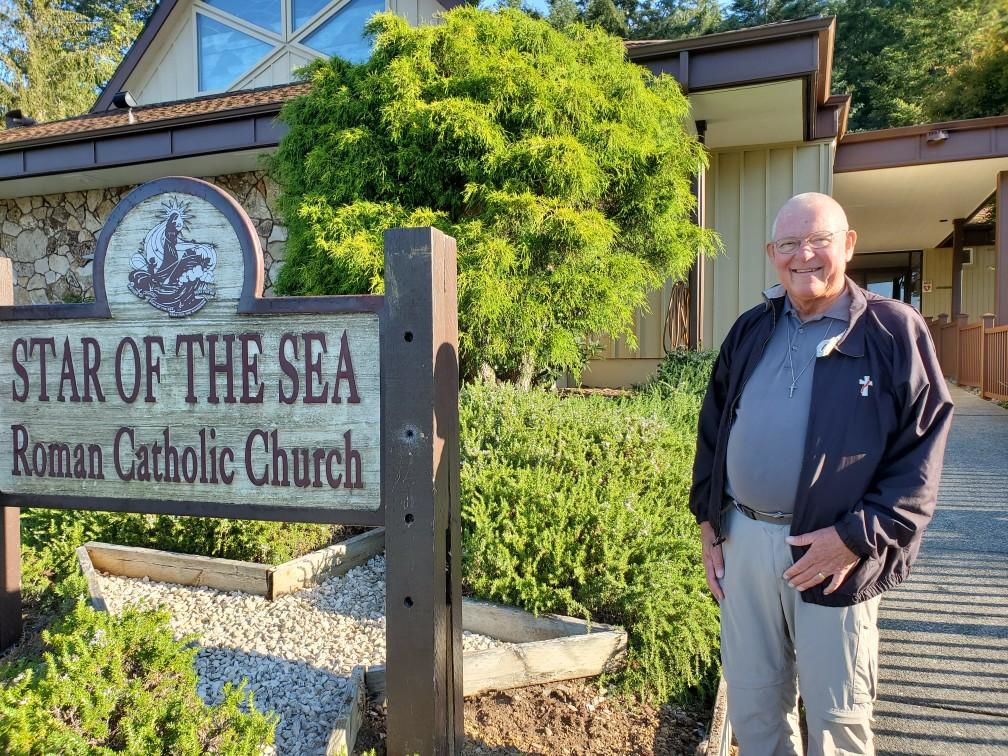 Deacon Leo Appel stands outside Brookings Catholic Church Star of the Sea, where he performs many of his responsibilities helping those less fortunate. 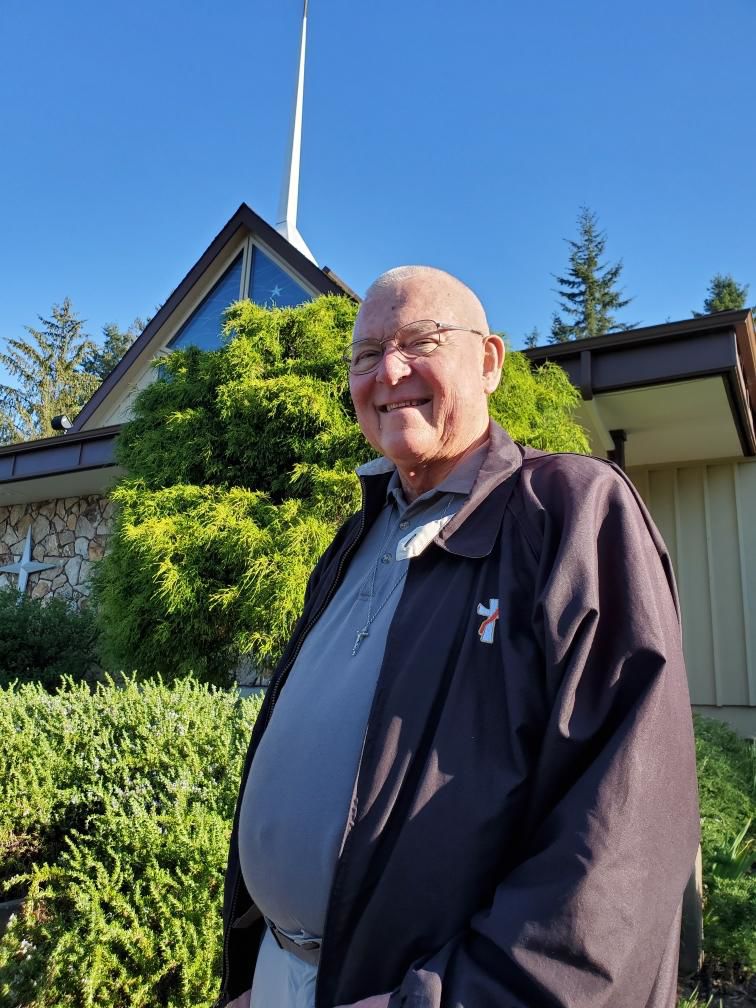 Deacon Leo Appel stands outside Brookings Catholic Church Star of the Sea, where he performs many of his responsibilities helping those less fortunate.

There are numerous ways one might spend those golden years after retirement — traveling, spending more time with family and friends, pursuing a hobby …

In 2001, Leo Appel was just one year away from retiring after owning a furniture store in Brookings for three decades, when he determined his golden years would be spent serving God.

The 72-year-old has been volunteering at Pelican Bay State Prison, just north of Crescent City, for more than seven years now.

For the five years following his retirement, Appel commuted from the south coast to Portland, earning a master’s degree in pastoral ministry from the University of Portland and Gonzaga University in Spokane, Washington.

“I was very fortunate,” said Appel. “Twenty of us started and just three of us were ordained five years later.”

Appel’s new career was to seek ordination as a deacon.

He said two types of deacons serve the Catholic Church: A transitional deacon has one more year to go before being ordained a priest. The other type is a permanent deacon.

“I’m a permanent deacon. This is a far as I want to go. I don’t want to be a priest, even should I have the opportunity to be,” he said.

Both a priest and a deacon are ordained by the church, can perform marriages and baptisms, teach and preach. But a priest conducts Mass, said Appel; he does not.

Nor is he paid by the church to serve as a deacon. In that regard, he said, he sees himself as an unpaid servant of the Lord.

“I don’t charge anybody for anything I do, including ministering at Pelican Bay. No mileage reimbursement, no paycheck from the CDC (California Department of Corrections). That’s the way I like it, because I can come and go as my schedule allows.”

That schedule often takes him to Pelican Bay once a week, usually on a Thursday, up to three times a month.

When a good friend, a Catholic chaplain, died suddenly in 2012, Appel said he had the privilege of conducting the funeral Mass and, later, at the burial. “Afterwards, these gentlemen wearing these fancy outfits approached me and asked, would you be interested in doing temporary ministering help at Pelican Bay?

“Well, temporary to me meant may be a month or two months,” Appel said. “Fifteen months later, they finally hired somebody who knew what he was doing.”

The prison had hired Chaplain Samuel Smolinisky (or Chaplain Sam, as the inmates and Appel call him) in 2013, who arrived there after serving for eight years in Los Angeles County.

“I enjoy talking to the men and enjoy serving with them,” said Appel. “But Chaplain Sam is an amazing man. He puts in long hours. And the inmates love him.

“He also speaks fluent Spanish, which is really an advantage. And I don’t speak a word of it.”

On the other hand, said Smolinisky, the credit goes to Appel for holding down the fort until the permanent chaplain arrived at Pelican Bay. “I’m not the hero, Leo is. He single-handedly provided Catholic services.

“I’d heard so many good stories of his interactions, I wanted to meet this guy,” Smoninisky said.

“There’s a gap between age and social economic status. Inmates come to church and are amazed by this man willing to bridge that gap and serve the poor. (So) there is no more gap here.

“That’s what Jesus Christ does, bridges that gap going from Heaven to Earth.”

The group Appel ministers to in B Yard numbers between 20 and 30 men. Services usually begin at 11 a.m.

Smolinisky will talk to the men beforehand, and go on to perform Communion but not Mass. Then Appel will get up and speak on whatever topics he chooses.

“I love the interaction. Sitting as close to them as across a table, to someone who is never getting out of the prison system because of his crimes. I feel very comfortable in that environment,” he said.

But his wife of 49 years, Cathy, initially didn’t share his comfort with the prison, its inmates or the job.

“I once asked a chaplain there what would happen if one of these men put a shank in my neck,” said Appel. “He said the prisoner would be dead within 24 hours.

“The CDC has their rules and we do our best to follow them. And the inmates have their own rules. One of those rules is, you don’t touch a volunteer. Because if you do, then all volunteers will disappear,” Appel said.

He relayed that to his wife, then a short time later asked if she would join him on one of his visits to Pelican Bay. She said yes, and he arranged for her visitor’s pass and escorted her in.

“So here she is,” said Appel, “a little old lady sitting in the back with all these men. I introduced her, then did my service.” As they were leaving at the end of the day, his wife surprised him with, “I really like those men.”

“Now that’s really a strange thing to say about the men incarcerated at Pelican Bay,” said Appel. “She enjoyed the time. In that room, with not a cop in sight - though Sam has an alarm and we carry whistles if something happens - she felt very safe.”

Added Appel, “(The inmates) feel very isolated. Many of their families have totally written them off. I want to let them know that somebody on the street cares about them. I do care, and they feel it.

“Sometimes, you meet some fascinating people. They’ll tell you their life story. Some of the holiest men I have met, and this is true, have been prison inmates.

“One chapel clerk I met down there was the only person I know who has read the Bible from cover to cover four times. He quotes chapter and verse better than anybody I could think of.”

When not assisting at the prison, Appel, who is deacon at Brooking’s Catholic Church Star of the Sea, volunteers for hospice care and with the City of Brookings’ community kitchen program.

For about eight years, five churches in Brookings have been providing a free, five-course hot meal for anybody who walks through the front door. Episcopalians, Seventh-Day Adventists, Presbyterians and Lutherans all have joined in, Appel said. “Everybody takes a different day, so nobody in Brookings has to go hungry.

“Most of the people we serve in the community kitchen are retired people; not the transients, not the homeless. These are people on limited incomes who have to choose, do I eat this week or do I buy my meds this week? And now they don’t have to make that choice,” he said.

“That takes up a bulk of my time. That’s all day Wednesday for me,” he said, “so that’s why I get to Pelican Bay only on Thursday.”

“In some of these men (at Pelican Bay) - and they’re rare - although they’re never getting out of the prison system, they have turned around their lives, become totally different men.

“And I’ve actually done full Catholic marriages, when I was doing full-time ministry, for men who married women they will never have a conjugal visit with. And that bothered me a little bit,” said Appel, “until I talked with one of the ladies after I did the marriage.

“I asked, why did you marry so-and-so? Her answer was simple: ‘I love the man.’ Now, how do you respond to that kind of answer?”

Soon, Appel said, he’ll have a career choice to make. Permanent deacons have optional retirement when they turn 75. They can either retire, or write a letter to the archbishop asking to continue their service.

“It depends on how I feel, mentally and physically,” said Appel. “When I reach that point, I’ll know and say it’s been a great ride. (But) right now, I don’t see retirement.

“I’ll make that decision when I turn 75. If I still enjoy what I’m doing, I’ll keep doing it as long as I can.”