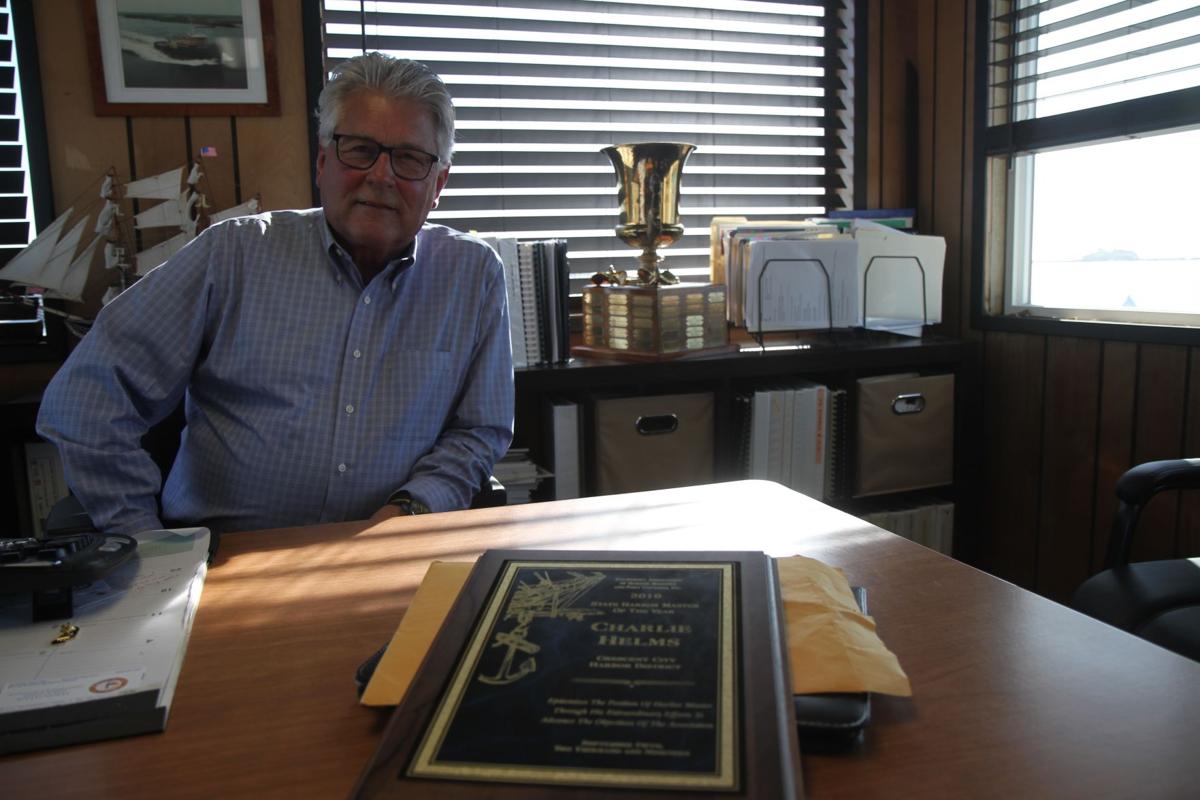 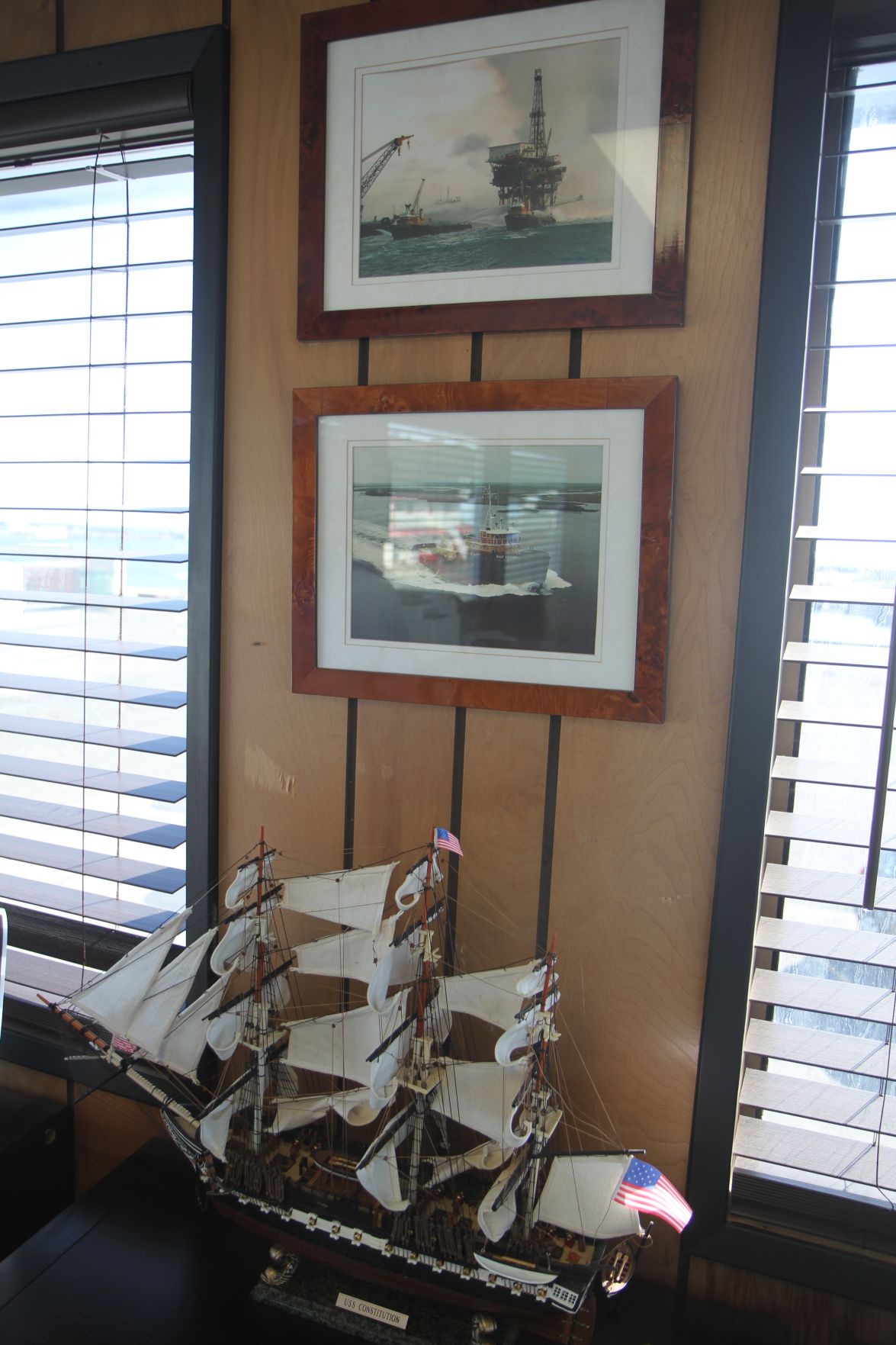 Images of Charlie Helms’ previous positions on waterways hang above a model of the USS Constitution. Photo by David Hayes.

Images of Charlie Helms’ previous positions on waterways hang above a model of the USS Constitution. Photo by David Hayes.

Both honors were bestowed by the California Association of Harbormasters and Port Captains Board during its annual conference earlier this month.

Although Helms is the association’s president, he had been successfully kept in the dark by the rest of the board. “At the awards ceremony, they said, ‘And now, for state harbormaster of the year … ‘When they’re describing his accomplishments, I’m looking around the room and thinking, ‘Who is this guy?’”

Helms confided, “It was really cool. I loved having my wife there. It was touching, something different at my age to get this kind of recognition in a job I applied for just because I thought, ‘Oh, I can make a difference.’”

Helms was working in economic development in 2014, sitting in an airport, when he saw a LinkedIn job posting for Crescent City harbormaster. “I thought, ‘Wow, it would be really amazing if it’s really like they say it is. I could really make a difference, help this group out.’

“I just thought how cool would it be to be intimately acquainted with someplace and really make a difference for a harbor.”

Helms had graduated from Southern Illinois University with a degree in journalism, but early on he veered toward a career on the waterways. His first job was as a deckhand in Mississippi. His career then took him further south, to the Gulf of Mexico.

But, he said, “I’d never worked in a brand-new harbor. I was always somewhere where there was something to work on, or something that was wrong. I looked at this harbor and thought, ‘How great is this?’”

When he traveled to Crescent City, Helms liked what he saw – some vacant land, and a port without a river bar, such as with Brookings and Eureka, allowing for easy access.

Once on the job, Helms said, his initial goal was to diversify the harbor’s revenue base. He explored getting another seafood processing plant, maybe a hotel, even designing a vertical tsunami experience and evacuation center.

“Also, when I got here, both RV parks were leased to private owners. Now we’ve got both parks. I think the revenue from those will put us in the black as long as we manage it well,” Helms said.

That said, there weren’t many activities for tourists. So with the help of Tamera Leighton, executive director of the Del Norte Local Transportation Commission, a grant was obtained from the California State Coastal Conservancy to complete a bike trail, enabling visitors and residents to peddle from the harbor all the way into downtown Crescent City.

Those harbor improvements have not gone unnoticed. “This is the third consecutive year that TripAdvisor.com gave us their Certificate of Excellence,” Helms said. “That’s a big deal, especially since we’re just a harbor.

“On their website, they say only about 10% of places reviewed receive that recognition. I’m not sure what their criteria are for that, but to me that’s a big deal. It’s something we can promote.”

Helms moved to Crescent City on short notice, bringing his 24-foot tow-behind trailer and setting up in the Bayside RV Park for the first five or six months. His wife, Karen, and Chihuahua mix Kiko, soon followed.

Karen, now executive director of the Northcoast Marine Mammal Center, gave up her own graphic design firm when she moved here.

“One of first things she said was, ‘Charles, do you realize it’s 83 miles to the nearest Target?’” Helms said. “She was able to get on as a volunteer at the visitor’s bureau, then the mammal center.

“She loves it. She was a diving instructor in the Florida Keys, loves boats, has always been water-oriented.”

Then there’s Kiko, a popular figure at the harbor office who loves paddle boarding and the seals, Helms said. “I got him a little lifejacket. I pick him up and he’ll start dog paddling immediately.”

Helms will serve as president of the harbormasters’ association for another year. He’s eying plenty of projects before he steps down, primarily the evacuation center, what with the 2011 tsunami that leveled the harbor.

“Lori Dengler, Humboldt State University professor emeritus, who’s an expert on tsunamis and earthquakes, said to me, ‘What you’re going to have to worry about is when the Cascadia goes (referencing the Cascadia Subduction Zone, a 1,000-kilometeer fault line that stretches from northern Vancouver to California’s Cape of Mendocino), you may have as little as 10 minutes to get people out of here.’

“So that’s a big thing now, educating people who are here. When you feel the ground shake for a minute, get the hell out of there.

“That’s why I really want to get the evacuation center up, why I want to get that on the corner off U.S. Highway 101. Within 1,000 feet are most of the hotels and 400 RV spaces.

“Its design needs to withstand a 75-year tsunami,” said Helms, “with a reinforced roof for a heliport. Because when that hits, Highway 101 is going to be gone. Who knows how many bridges will be left standing?

“We need somewhere that wounded people can be evacuated, and (be able to) get supplies, at least, into here,” he said.

Potential disasters aside, Helms said his wife won’t let them leave this area. “The attraction of Crescent City, for my wife and I, it’s the most beautiful place we’ve ever lived. The mountains are right there and go down to the sea.

“Go up Elk Valley Road and you’re in the redwoods in 6 miles. I take the dog out for walk and can hear sea lions barking out at Castle Rock. It’s a gorgeous place.”

Bravo. And thanks for the Sunset Cam.