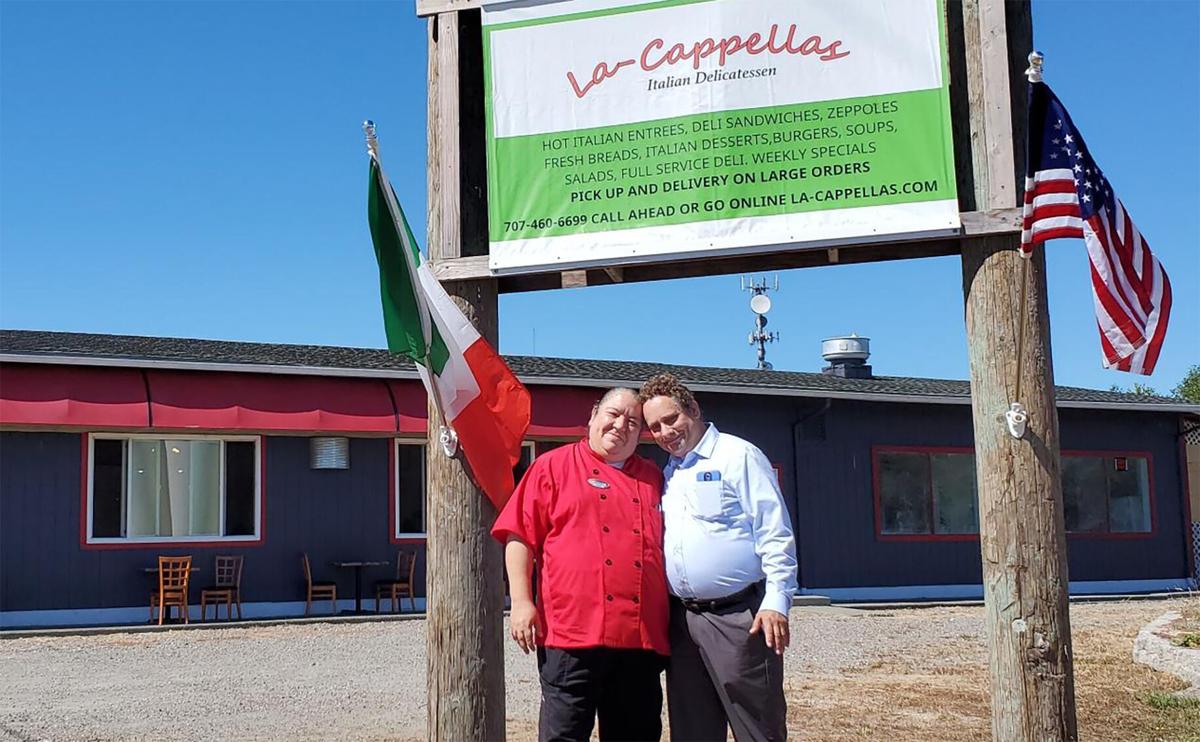 Kathy and Joseph Lujan have big ideas, including a larger sign, for their new restaurant ‘La Cappella’s.’

Kathy and Joseph Lujan have big ideas, including a larger sign, for their new restaurant ‘La Cappella’s.’

Kathy and Joseph Lujan had no fear opening a new restaurant during the COIVD-19 pandemic.

In fact, they figure it’s perfect timing for their Italian delicatessen “La Cappella’s,” which features a menu of ready to go short orders.

“I said to myself, ‘A pandemic? I don’t care. I’m going to go for it. It’s all delivery and carry out. No dine in... everything was carry out and delivery. It wasn’t going to effect me any,” said Kathy a certified chef with 35 years’ experience cooking and teaching the culinary arts.

Kathy has opened five restaurants over her career, but always for someone else. This is her first solo venture. Joseph, a contractor in the Bay Area, handles the restaurant’s marketing.

They met in the Bay Area six years ago, married a year later and vacationed annually in Crescent City.

“When I saw this area, it reminded me of my little home town of Pacifica where I grew up, about 10 miles south of San Francisco,” Joseph said.

“We said, ‘You know, we need to retire up there,’” Kathy added. “And I’m like, ‘this place needs a restaurant and my cooking.’”

Actually 10 years in the making, the dream came together quickly in the end. They moved here July 1, took control of the property July 27th and opened “La Capella’s,” named after her grandmother, Aug. 15, to unexpected results.

“La Cappella’s” menu features Kathy’s family recipes, like her grandmother’s lasagna and Italian stew. The rest, she adds a little flare of her own, such as the baked desserts - cannoli, biscotti and pana-cotta.

The Lujans also had no qualms about opening at 105 N Street — the location of two former restaurants, “Bellanotte” and “The Thai House.”

“I saw nothing but potential here,” Joseph said.

“We’ve got no worries,” Kathy added. “We’re going to make it big and beautiful.”

Only leasing now, they plan to purchase the property as soon as it’s available. Then they’ll put in a manicured lawn, expand and repave the parking lot, and install a band shell and gazebo for outdoor events like weddings.

Outside, they’ll have murals painted on the side of building and inside, they’ll cover the white interior with wall-to-wall Italian scenery.

“We’ve had some people come in that were familiar with the places that were here before. A lot of that bad mojo is gone. I’m happy to say, it will never be back,” Kathy said.

“Just don’t ask for alcohol. We don’t do that. This is family,” Joseph added, sweeping his arms to include the staff and other customers awaiting orders. “So everyone’s included. I’m sure everyone will come see us eventually.”

Check our the menu on “La Cappella’s” Facebook page https://www.facebook.com/lacappellas.