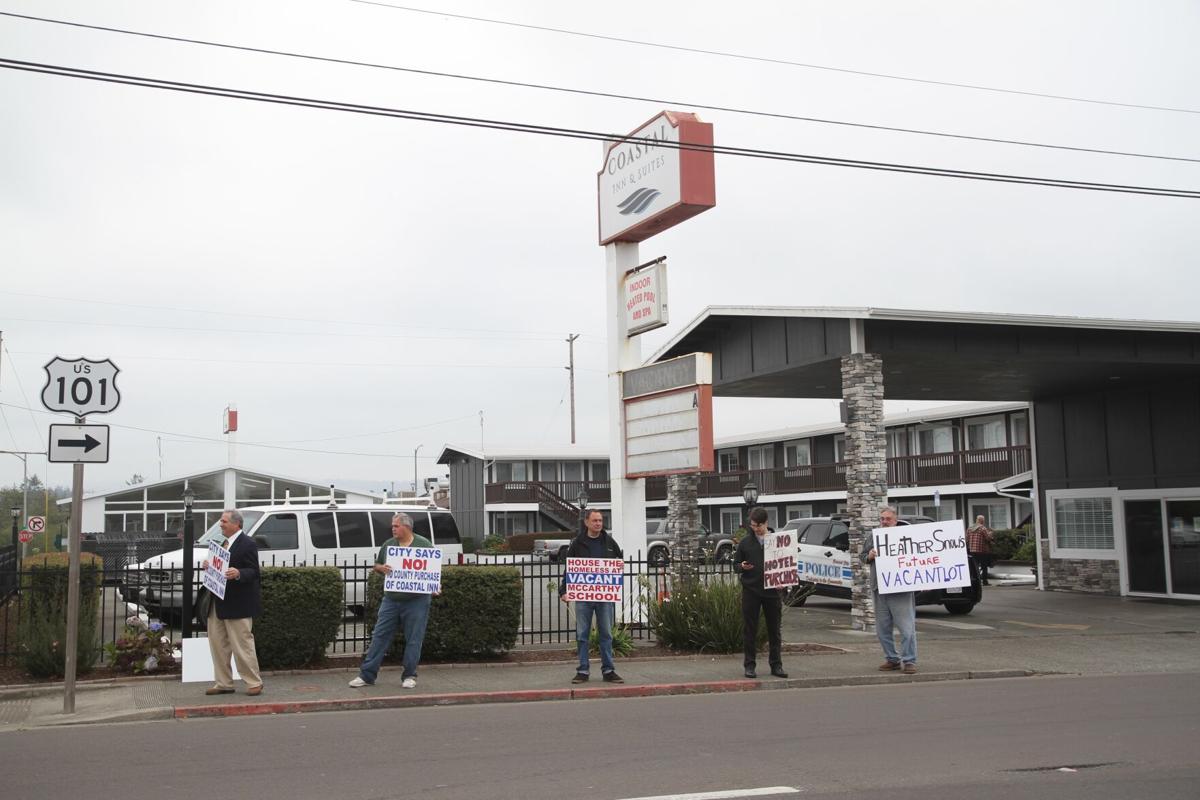 Protestors line Highway 101 in front of the Coastal Inn & Suites Oct. 8 in opposition of the county purchasing the property for permanent homeless housing. 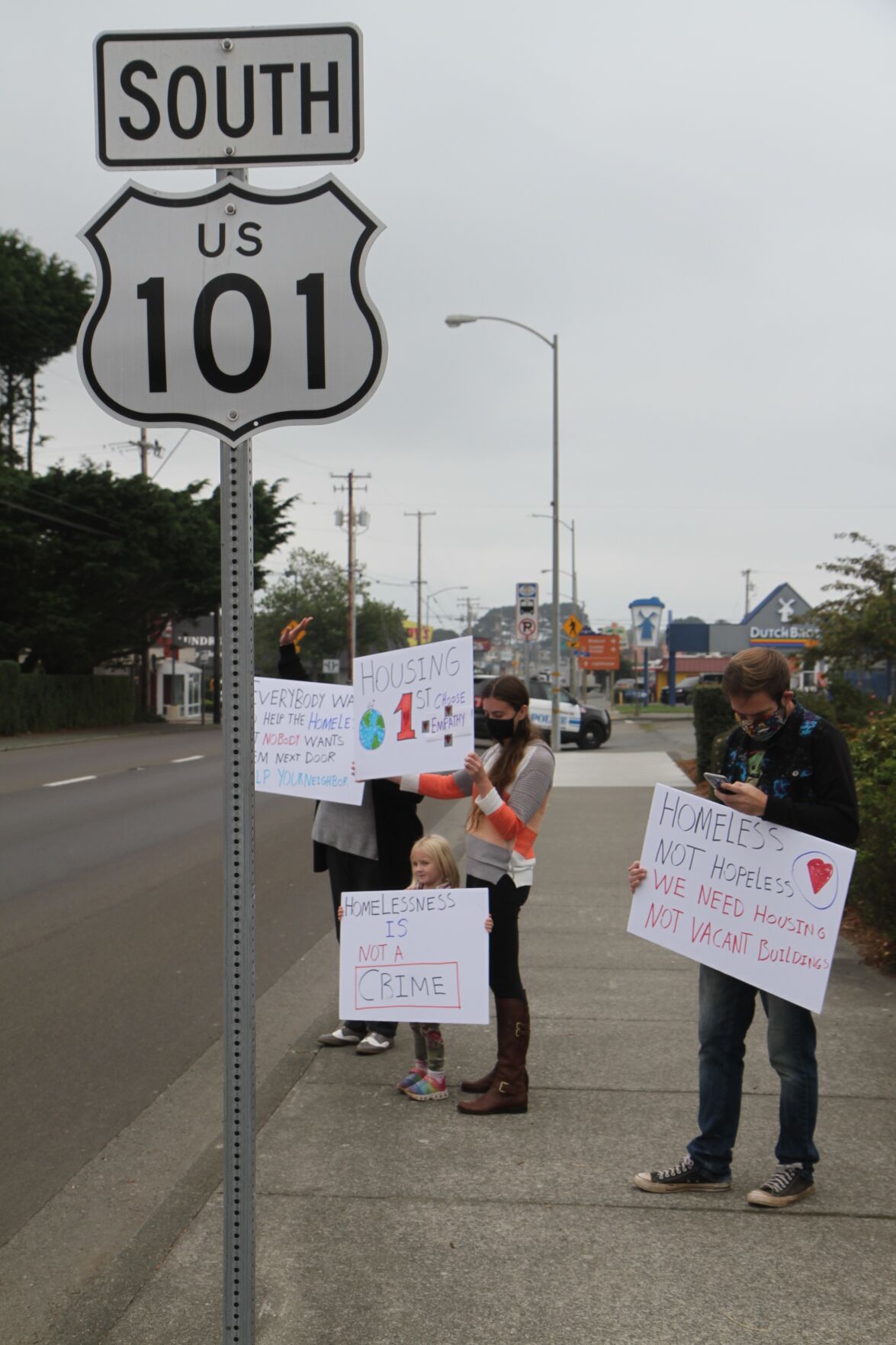 A counter rally Oct. 8 drew about five supporters of the county’s desire to purchase the Coastal Inn & Suites to convert into permanent homeless housing.

Protestors line Highway 101 in front of the Coastal Inn & Suites Oct. 8 in opposition of the county purchasing the property for permanent homeless housing.

A counter rally Oct. 8 drew about five supporters of the county’s desire to purchase the Coastal Inn & Suites to convert into permanent homeless housing.

A proposed purchase by Del Norte County of a downtown Crescent City hotel with a state funded grant drew opposing rallies Oct. 8 in support and in opposition to the move.

Del Norte County’s Department of Health and Human Services (DHHS) plans to use $1.9 million of a $2.4 million grant it received from the state’s Homekey Program designated to convert an existing facility into permanent homeless housing. In this case, the Coastal Inn & Suites located at 665 L Street.

The County Board of Supervisors will discuss the proposal at their meeting Oct. 13.

However, about 15 community members armed themselves with signs to oppose the move for many reasons. Opposition for City Council member Jason Greenough was twofold — the loss of Transient Occupancy Tax (TOT) and a lack of communication between the city and county.

“We support the program, but we don’t support this purchase,” Greenough said. “This is the wrong place. It’s a profitable business. We’re gaining TOT out of it. We’re going to be losing TOT if it becomes government owned.”

He added the City Council was blindsided by the county’s plans to purchase the property. On Sept. 8, the council voted 4-1 to send a letter to the County Supervisors in opposition to the purchase, with Councilor Alex Campbell the only no vote.

Mayor Blake Inscore read the letter to the Supervisors during the public comment period before they entered closed session Sept. 22.

“A primary strategy for Operation Homekey is the conversion of existing hotels into permanent housing resulting in the loss of Transient Occupancy Tax and sales tax. These fiscal impacts are reasons for clear communication between the city and county if the project involves property within the city limits,” Inscore read. “While the county has identified Coastal Inn and Suites as a potential site for Project Homekey, the city would ask that the county would actively pursue all potential properties to find the best fit for the project and the community. Council is aware of there being a cost to the issue but is asking we address this challenge together with open lines of communication.”

Greenough added at the rally he’d prefer the county explore some of the properties on 9th Street to get refurbished.

“I don’t want anybody to get hurt wandering across the street here. These are our two main thoroughfares through town. These are profitable businesses that provide revenue to the city,” Greenough said.

“It’s close to most of the jobs in town. It’s close to the resources they need to be able to move out to their own housing and back into society,” Polen said. “Something needs to be done. You can’t complain about camping out at the lighthouse, detracting from tourism making our sound look crappy then say well I don’t like your solution.”

The DHHS has been renting rooms for a clients with a variety of needs at the Coast Inn & Suites since at least 2015-16. According to DHHS report to the Supervisors, the county has spent just over $1 million since 2015 and $222,788 this fiscal year alone.

The Coastal Inn however, hasn’t just provided shelter for the homeless.

According to DHHS Director Heather Snow, Coastal Inn & Suites has provided emergency housing arrangements to Del Norte County residents since May during the COVID-19 pandemic. Since then it has served 64 adults and 14 children through Project RoomKey who are at risk of contracting COVID including emergency and healthcare workers, individual care providers who may have contracted the virus from another and at risk homeless populations. Currently DHHS is utilizing the motel at full capacity of 30 rooms according to Snow’s report.

However, occupancy isn’t the only thing up at the inn. Crescent City Police Chief told the County Supervisors at the Sept. 22 meeting that law enforcement service calls have seen a steady rise at the inn. He said there were 29 total service calls from April to September in 2019. That number in the same timeframe in 2020 is already at 80.

“We’re dealing with a huge increase in overdoses, not just at this hotel, but throughout the county,” Griffin said. “But there has been a lot at that hotel. And a lot of domestic (violence calls), that we don’t contact at the hotel but a few blocks out as they’re leaving the hotel.

“I don’t know where a good place for this is. All I know is we’re seeing is a trend in crime right there on the highway,” Griffin added.

County Supervisor Roger Gitlin, who attended the rally opposing the purchase, said he was conflicted about the situation because he was unable to speak of the county’s discussions over the property purchase before it left closed session. He said the county Supervisors did not announce it because it was not an official vote, rather it was a consensus vote. As a resident of Crescent City, he also is worried about how much the city would lose if the county were to purchase the property.

“What nobody’s talking about is this building generates $34,000 a year in Transient Occupancy Tax. Plus the property tax — 1% of the assessed valuation of $1.8 million, the county gets 19 cents on the dollar and city gets little less than a penny,” Gitlin explained.

“I believe in homeless shelter as part of fulfilling the requirement of Martin Vs. City of Boise so these people are not lying around in the park all day long,” Gitlin added. “We just want it off the 101. This will stigmatize our local businesses and will hurt them. We’re just asking for another location and there are plenty.”

He pointed to converting an apartment house or using the vacant McCarthy Alternate Education Center, located at 620 Williams Dr., which is already government owned and not being used for anything.

“I just say to my colleagues, reconsider your vote. We need to put it in another location. What happens when the county fails to get more money from the state? Then what happens to this building when the county owns it? It’s not thought out well,” Gitlin said.