The group of H-DNL players signing their letters 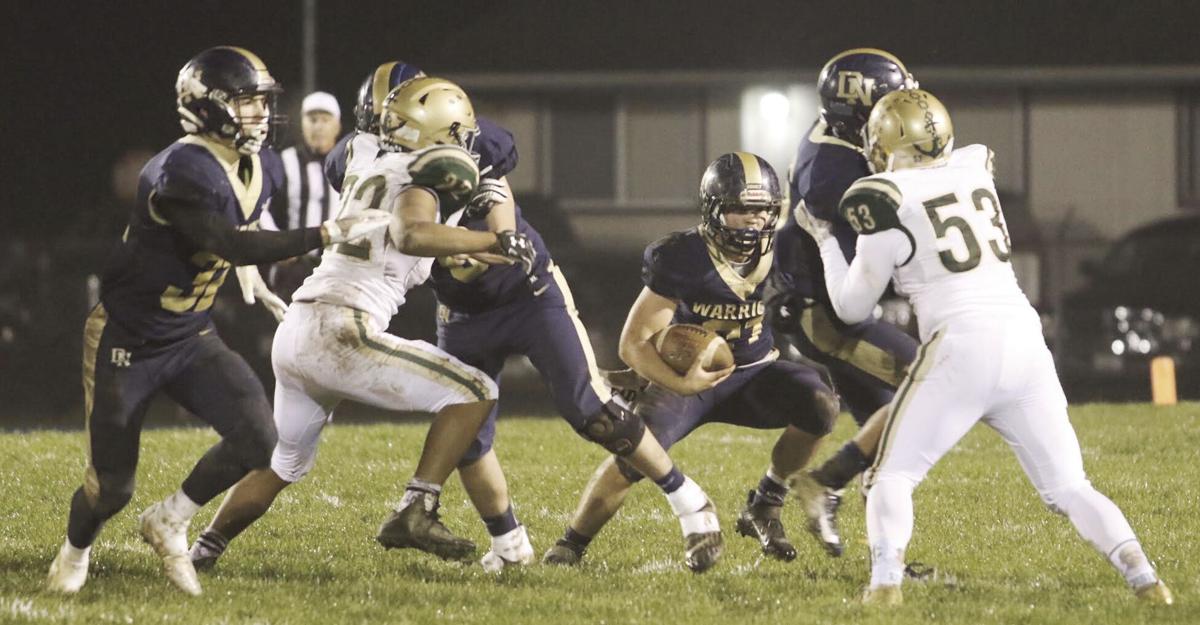 The group of H-DNL players signing their letters

The Del Norte Warriors look set to play a big role when football returns to College of the Redwoods next year.

Four of this year’s graduates recently committed their future to the re-instated program, which will begin play again in the fall of 2022.

Del Norte’s Levi Cox-Cooley, Tanner Forkner, Kaleb Price and Michael Germain were among a group of 22 Humboldt-Del Norte League players to show up on campus to sign their letters of commitment last month.

The school’s football program was suspended in July of 2020 for budgetary reasons but was re-instated earlier this year on the condition there would be a greater emphasis on academics and local recruitment.

New head coach Jason White was hired in April and has immediately set about adding a big foundation of local players, including the four Warriors, with eyes on adding more Del Norte players.

“We’re going to have over 40 (local players) I think, so that will be the biggest local group I’ve ever coached at College of the Redwoods,” said White, who previously coached with the program for a decade in the 1990s and early 2000s. “And I’m excited about that.”

The four Del Norte players each received all-league recognition during their playing days for the local high school, and all of them are expected to play a key role at CR.

Forkner, who was arguably the best defensive player in the H-DNL this past spring, is expected to have an immediate impact at linebacker.

“He’s the ultimate kid you want on your team, and not just on the field. It’s his attitude, his leadership, his effort, his intelligence,” said Del Norte head coach Nick White, who is a brother of Jason. “Tanner, for me, it’s not even close, he was by far the best defensive player in the league.”

Jason White expects Forkner to be a leader for the Corsairs and loves the work ethic he has shown.

“That guy is just intense and extremely physical. You get every pound out of that guy,” the CR coach said. “That’s the kind of guy you want on your team to set the example for the rest of the program, this is how it’s going to be.”

Price was a first-team all-league selection this spring and also plans on playing basketball for the Corsairs beginning in 2022.

He will play tight end for the football team, but Jason White likes his versatility and hopes to utilize him out wide as well.

“What he really does is give us some flexibility on offense,” the CR coach said. “He has the ability to go up and get the ball, and that’s what he’s extremely good at.”

Cox-Cooley missed most of his senior season after suffering an injury in the opening half of the first game.

But the standout running back was named Co-Offensive MVP of the Big 4 as a junior and will also be expected to have an immediate impact at the next level.

“When I watched him in the first game against Arcata, I could tell he’s a different cat to the rest of the league,” Jason White said. “It’s the way he moves, and he’s got great eyesight, and he can set up blocks really well.”

For Cox-Cooley, CR was too good an opportunity to pass up when the coach came calling.

“I’m just trying to keep playing football and get an education,” he said. “That’s the main goal. And get as far as I can with it, and this is a great start and a great opportunity.”

Germain, meanwhile, played football this spring for the first time since his freshman year, but he has a big upside, according to Jason White.

“I’m curious to see what he can develop into,” the CR coach said. “He’s an athlete.”

Germain starred at cornerback for Del Norte, while also seeing plenty of time at running back.

The first-team all-league selection is expected to see time at both positions at CR.