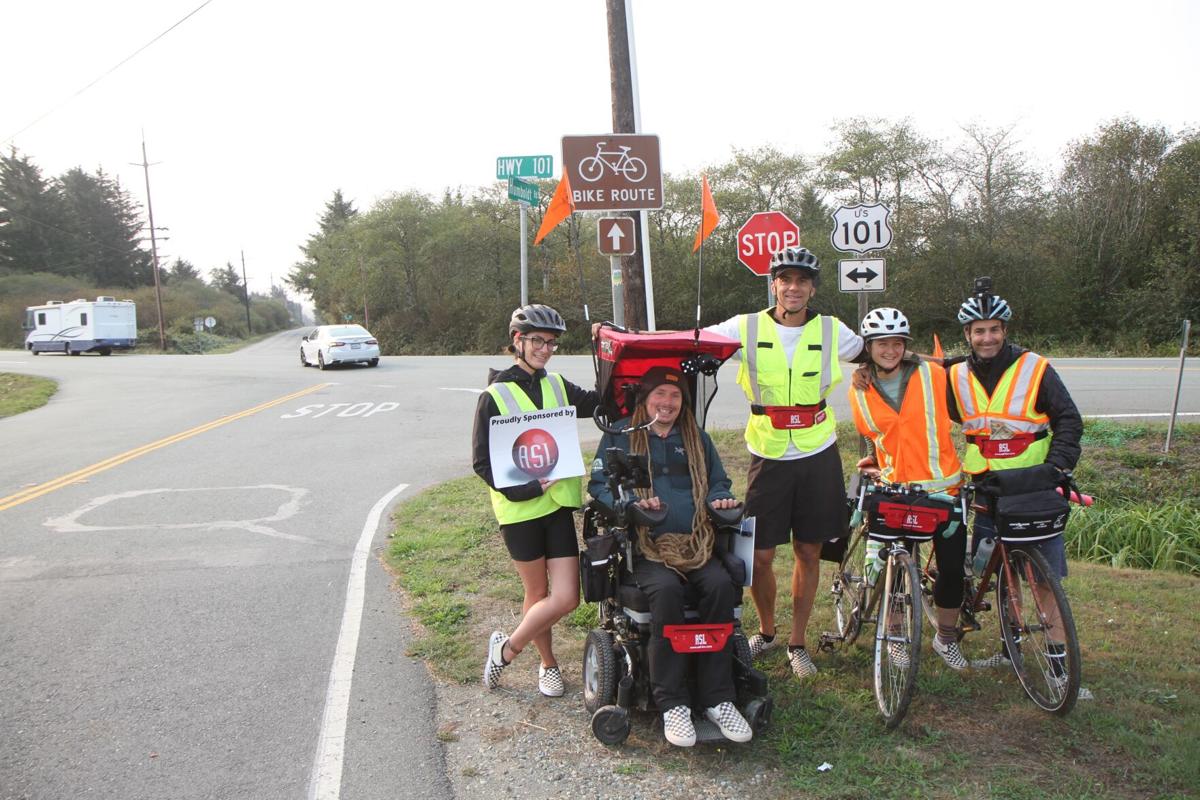 Ian Mackay and his crew (from left) Celina Smith, Jimmy Quenelle, Maureen Foley and Josh “Dr. B” Blaustein, take a group photo to post to social media before they hit the road Oct. 5 on the second leg of Ian’s trek out of Crescent City. 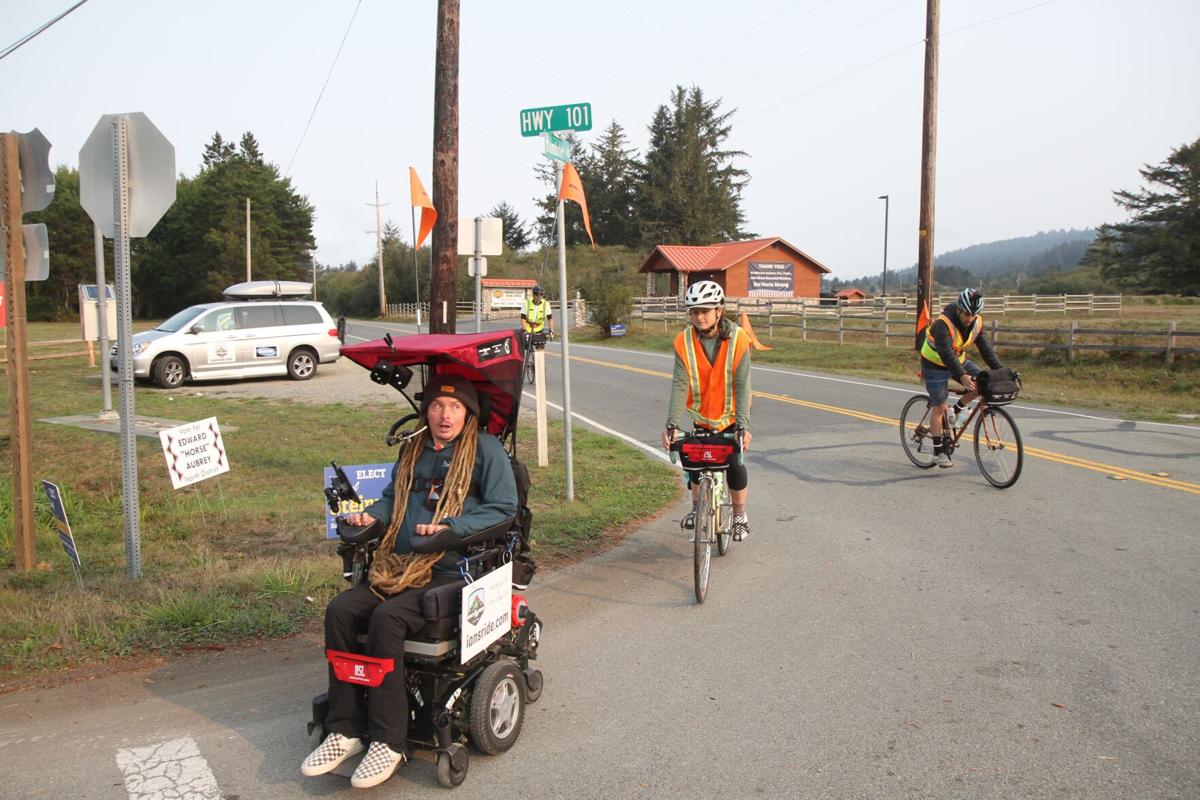 Ian Mackay leads his road team off Humboldt Road to head south across Highway 101 Oct. 5 on the second leg of his 272-mile ride from Brookings, Oregon, to Fort Bragg, California. 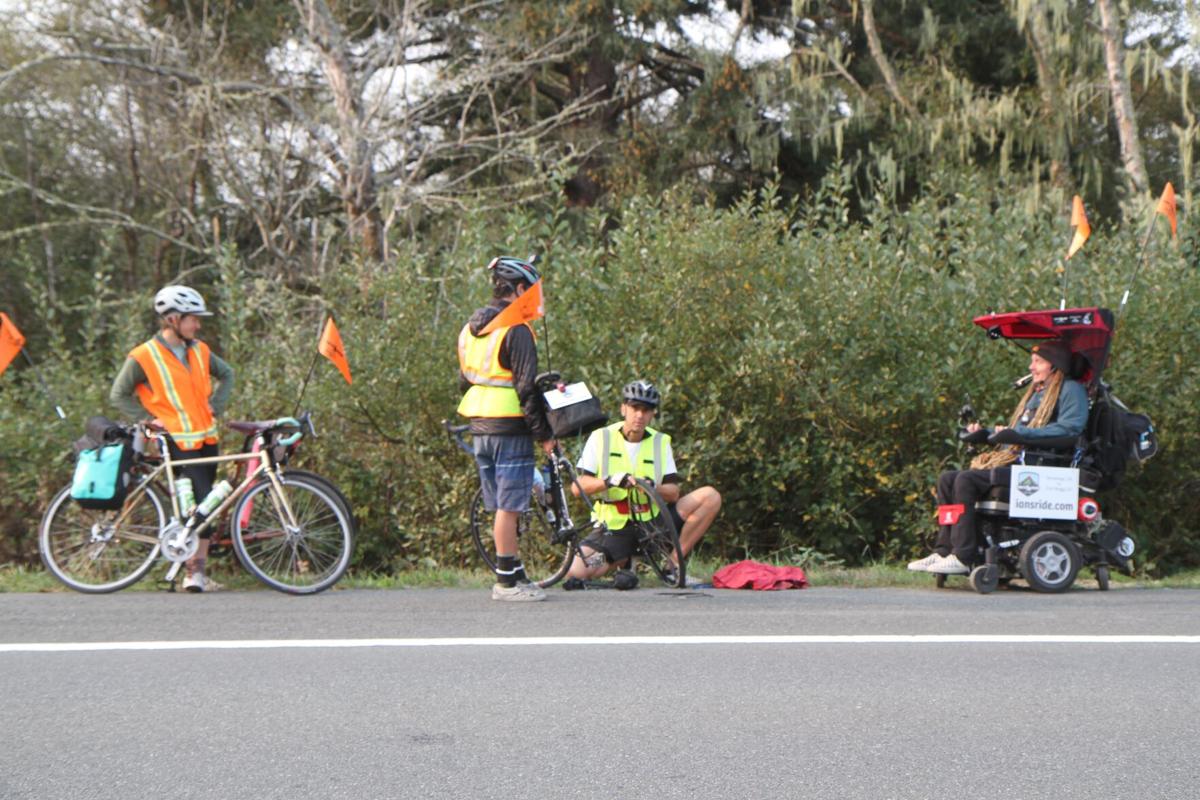 Day two of Ian’s ride starts off with a bang, as accompanying bicyclist Jimmy Quenelle fixes a blowout of one of his bike's tires.

Ian Mackay and his crew (from left) Celina Smith, Jimmy Quenelle, Maureen Foley and Josh “Dr. B” Blaustein, take a group photo to post to social media before they hit the road Oct. 5 on the second leg of Ian’s trek out of Crescent City.

Ian Mackay leads his road team off Humboldt Road to head south across Highway 101 Oct. 5 on the second leg of his 272-mile ride from Brookings, Oregon, to Fort Bragg, California.

Day two of Ian’s ride starts off with a bang, as accompanying bicyclist Jimmy Quenelle fixes a blowout of one of his bike's tires.

Ian Mackay’s ride Oct. 5 out of Crescent City, the second leg of a 272-mile journey from Brookings, Oregon, to Fort Bragg, California, literally started with a bang.

Less than a quarter mile after kicking off the day heading south on Highway 101 from Humboldt Road, a tire blew out on the bike of one of his accompanying cyclists.

Mackay chose the Redwood Coast for his third big ride to advocate for more outdoor accessible pathways, especially for those confined to wheelchairs as he is.

His first time along the Redwood Coast was in 2006, before his injury, on the road crew for good friend Josh Blaustein’s bike tour through the region. Now Blaustein was a member of the crew accompanying Mackay.

An avid outdoorsman, Mackay suffered a spinal cord injury in 2008 from a bicycle crash, leaving him paralyzed from the neck down.

But the injury didn’t leave him inactive.

As technology caught up with his love of touring the outdoors, Mackay journeyed further and further in a powered wheelchair.

His first big ride in 2016 was a 335-mile excursion across Washington State.

He followed that up in 2018 with a trek from Coeur d’Alene, Idaho to Port Angeles, Washington.

Along the way, he founded the nonprofit Ian’s Ride.

“What we do is advocate for a more accessible outdoors,” Mackay told The Triplicate. “That can be a variety of things — pushing legislation to increase trail access, side with the cycling community, working on a grant to get an accessible merry-go-round in a park near my home, or a pump track with ADA parts.

To make the outdoors fun with kids with chairs or anyone else in a chair.”

He added through the big ride, he demonstrates to others that it can be done.

Mackay’s electric chair is decked out for comfort on the open road. He sits beneath a red canopy to keep off the sun’s harsh rays. It’s topped by attention grabbing red flags and a pair of fuzzy dice “for style.”

In the rear are two lithium batteries (with a third on the way to get him up the hilly sections of southbound Highway 101) and a coughalator to actually help MacKay cough, as his high spinal chord injury prevents full breaths.

Another setback of the injury is the inability to regulate his body temperature. That’s where his signature dreadlocks come in handy, which hang down and loop into a small bundle in his lap.

“I don’t know how they got to be this long, to be honest,” Mackay said. “They just hit 17 years. I did it kind of on a lark, and here I am, 17 years later, still... I can’t shiver to stay warm or sweat to cool off. I live in the Olympic Peninsula, it’s cold up there, and the hair is good for that. However, in the past 3-4 months, it’s starting to get long enough where it’s getting caught in the wheels. So I have to have this silly hair wrap in my lap. But hey, it keeps me warm.”

The dreads came in handy for his run down from Brookings, as well.

“We had a lot of fun, on the side roads, cruising through Brookings, and just meandering down the coast,” Mackay said. “I will say, it was cold. Started off a little chilly day one.”

As the executive director of Ian’s Ride, Mackay said he loves being a part of the outdoor community, an ambassador and a consultant for chair manufacturers.

“I love talking with the people making the equipment that allows us to get out there, to live a lifestyle we want,” he said.

He added he’s also an advocate for more accessible trails. The Pacific Coast bikeway would be a perfect recipient of his advocacy.

Mackay said the challenge was the narrow shoulder on Highway 101 and having to keep his chair between the guard rail and the rumble strip.

“If I touch that rumble strip, it tends to pull me into traffic. And my chair pulls a little to the left anyway and I’m always correcting. It was a little anxiety-rich first day, getting back into the swing of the ride,” he said.

Mackay said his chair’s top breakneck speed, no pun intended, is 7.5 mph. On a flat route, with both batteries in their prime, Mackay can go 50 to 60 miles.

“But with hills, with a battery that’s a couple years old, it’s going to be tough. We have a 40.5 mile day out of Crescent City on day two to just south of Orick. With hills, not sure if we’re going to make it or not,” he said.

He added his chair actually works in his favor navigating a consistent speed on the hills, where his escorts on bicycles have to ride their hand breaks to keep even with him on downslopes.

“I don’t love being on the side of highways. It’s pretty good. There are some places that are a little sketchy. But I’ve got the best crew a guy could ask for. They get out there and make me feel pretty safe,” Mackay said.

During the pandemic, he’s had to cut back on some of the regular activities he enjoys during his rides.

“I love to sit in a brewery at the end of the day, talk about the ride while drinking a cold one,” he sad, adding he was able to stop at SeaQuake on Saturday and Port O’Pints on Sunday, but with a smaller crowd. “And rather than hotels, we’re doing Air BNBs to stay isolated. We get there, everything gets Clorox wiped down. I have to recognize I am a high risk person, we just do everything we can to keep our bubble small.”

Mackay added he was unable in invite his many close friends from UC Santa Cruz, where he was injured, nor was he able to invite his dad up from San Diego.

But his mom, Teena Woodward accompanies him as driver on his crew. She’s grown accustomed to following her son on the open road, even if she did think he was crazy during the first big ride.

“Then it became this big whirlwind as he got a lot of attention. It became bigger than him wanting to go on a long ride with his buddies and drink beer. It got to be really big,” Woodward said. “In 2018 it was terrifying coming down the Cascades, with RVs and smoke and no visibility. I was really worried. Now, this is the third time. I’m coming into it with no expectations, you really don’t know what’s around the next corner. It’s alway a big energy push to keep him going. I’m proud of him. It’s what he loves to do.”

Over the years, as Ian’s Ride has gained national attention, Mackay has seen progress big and small, from the State of Washington paving a six-mile section of Hurricane Ridge allowing access to explore the back country of a national park, to seeing moms with developmentally disabled kids get involved.

Regardless how big the results of his advocacy, Mackay said the message, in the end, remains simple.

“People, no matter what their ability level is, get outside,” he said. “We have an incredible world to explore. Go check it out. Don’t stay in your house.”