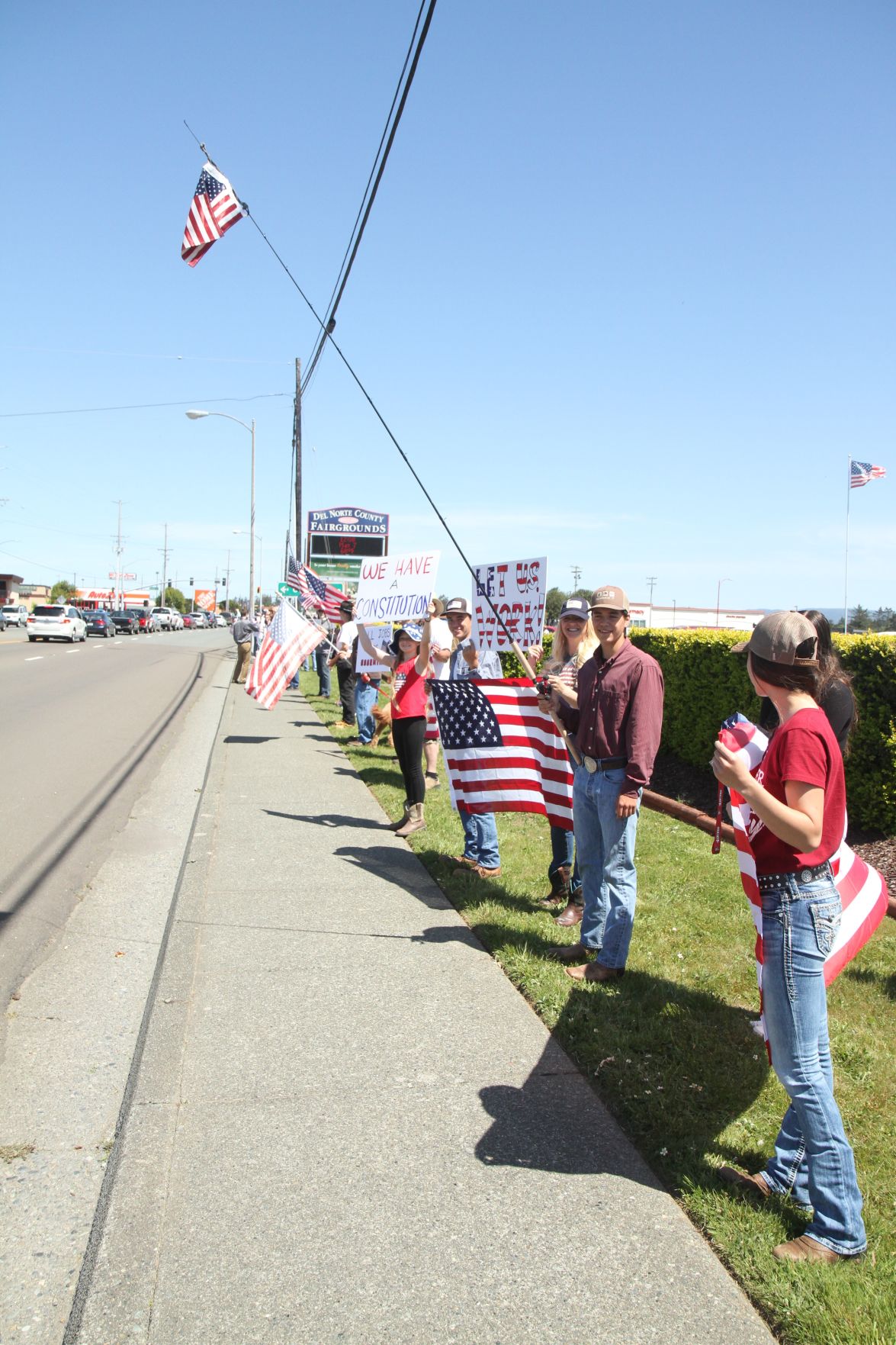 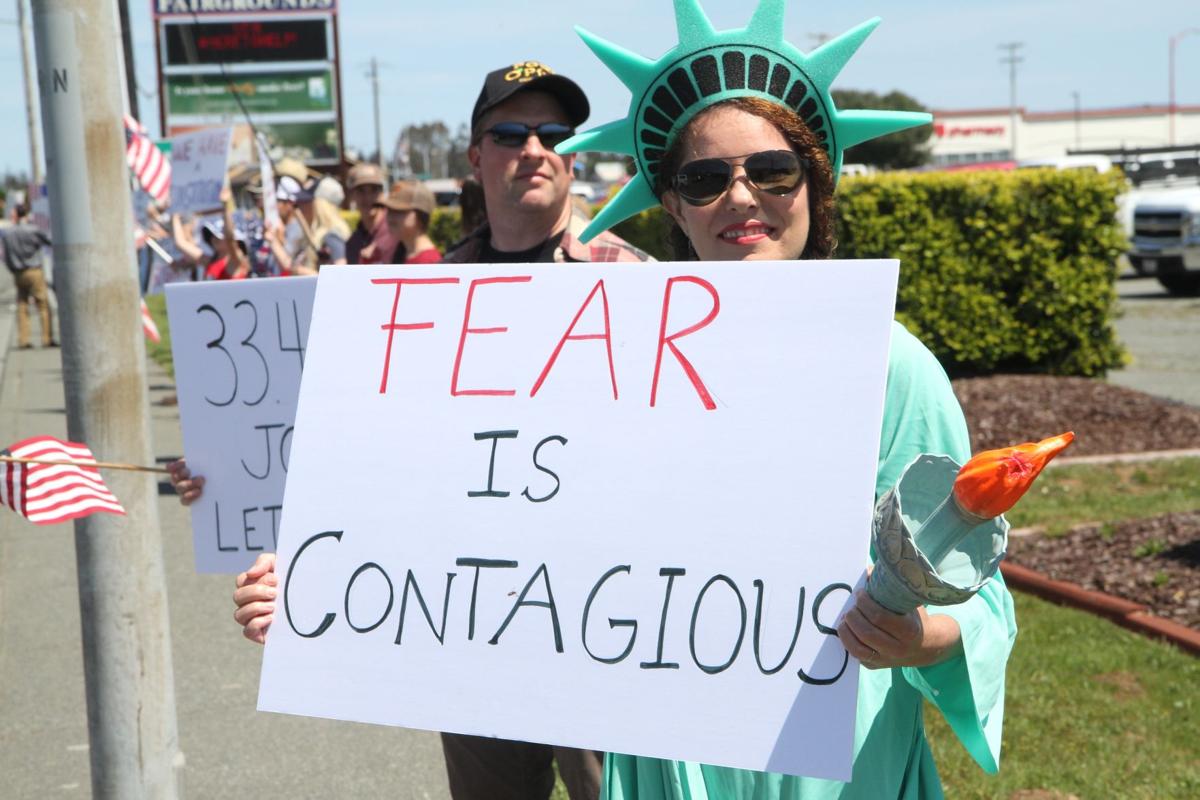 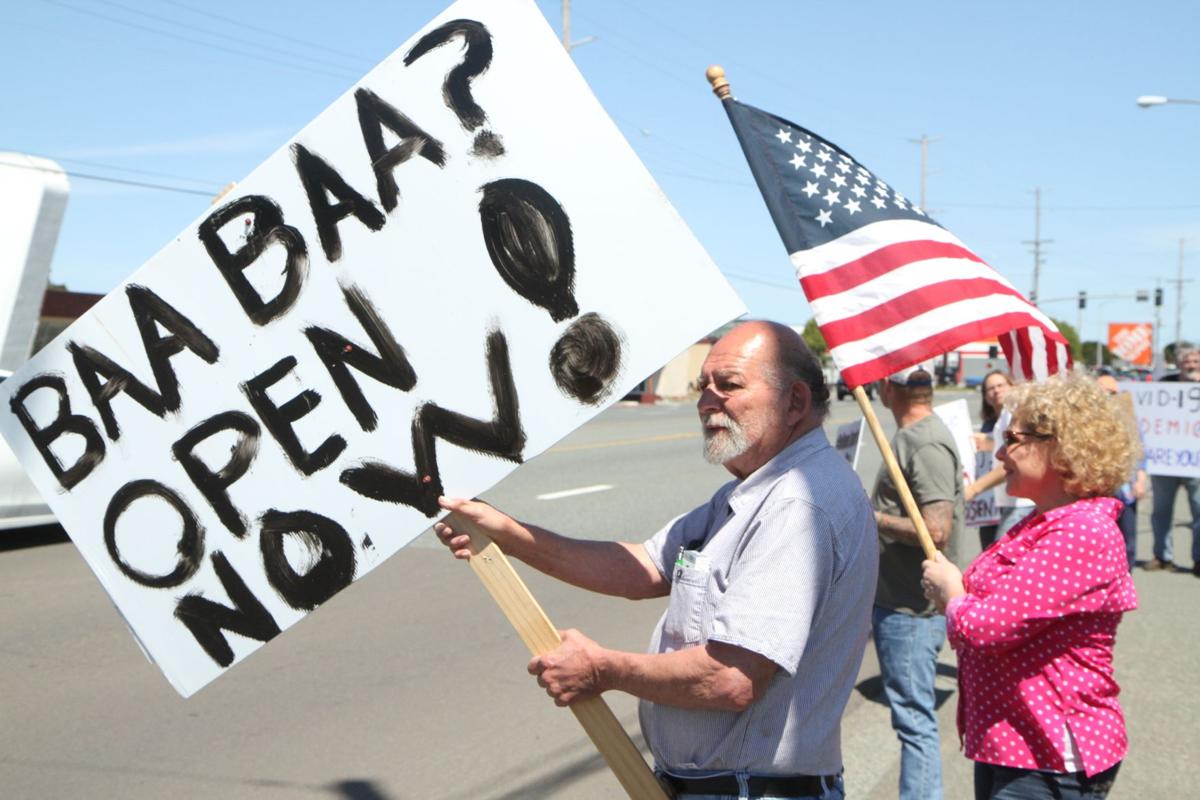 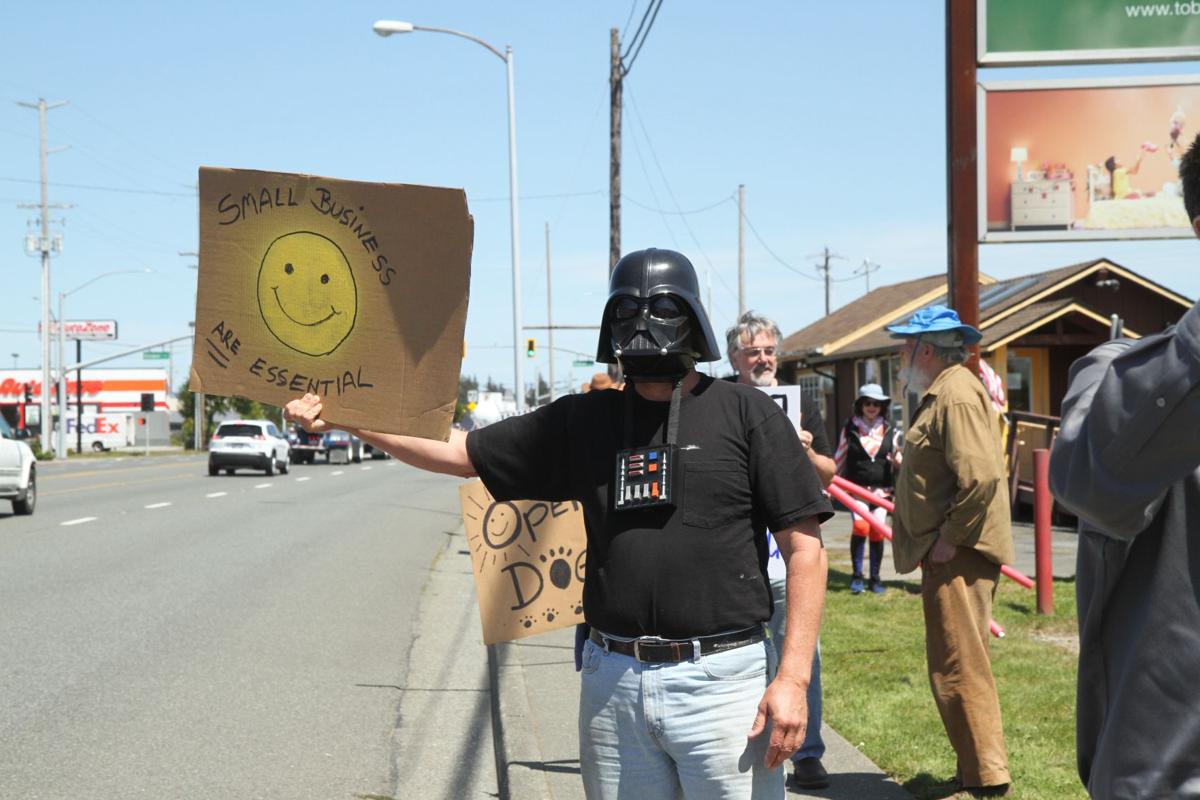 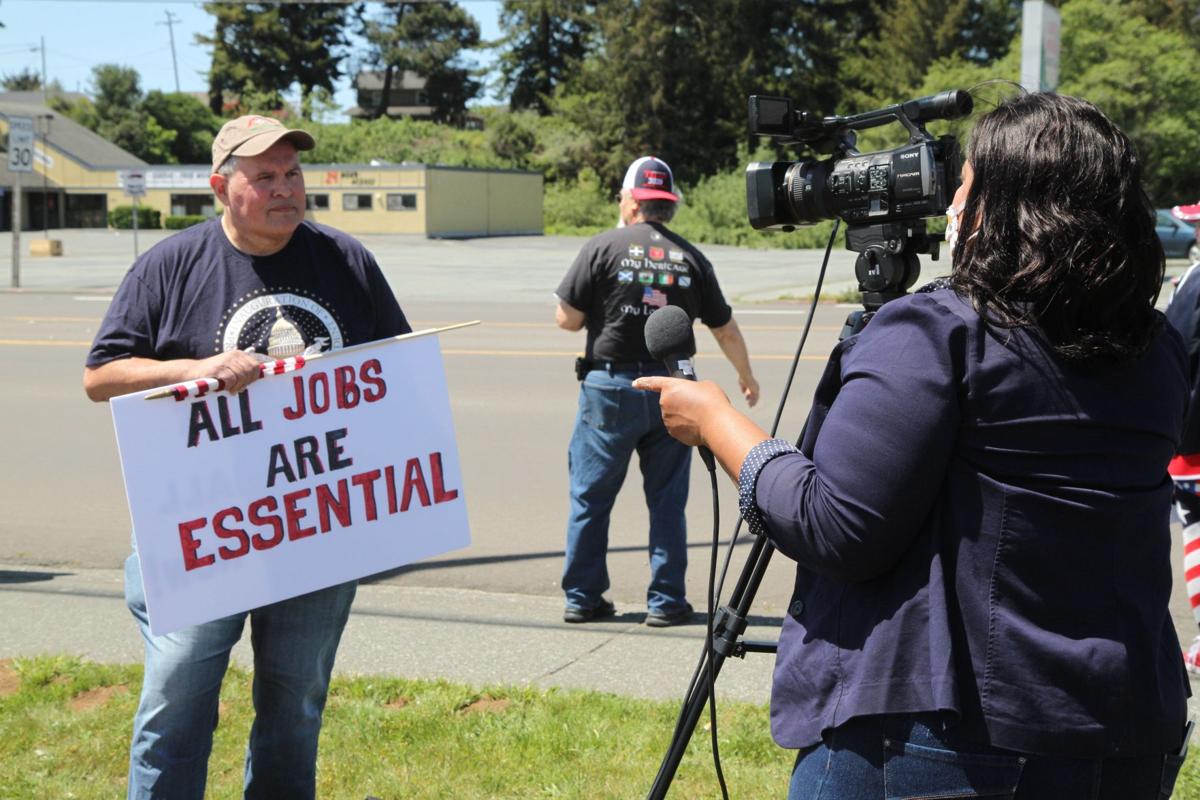 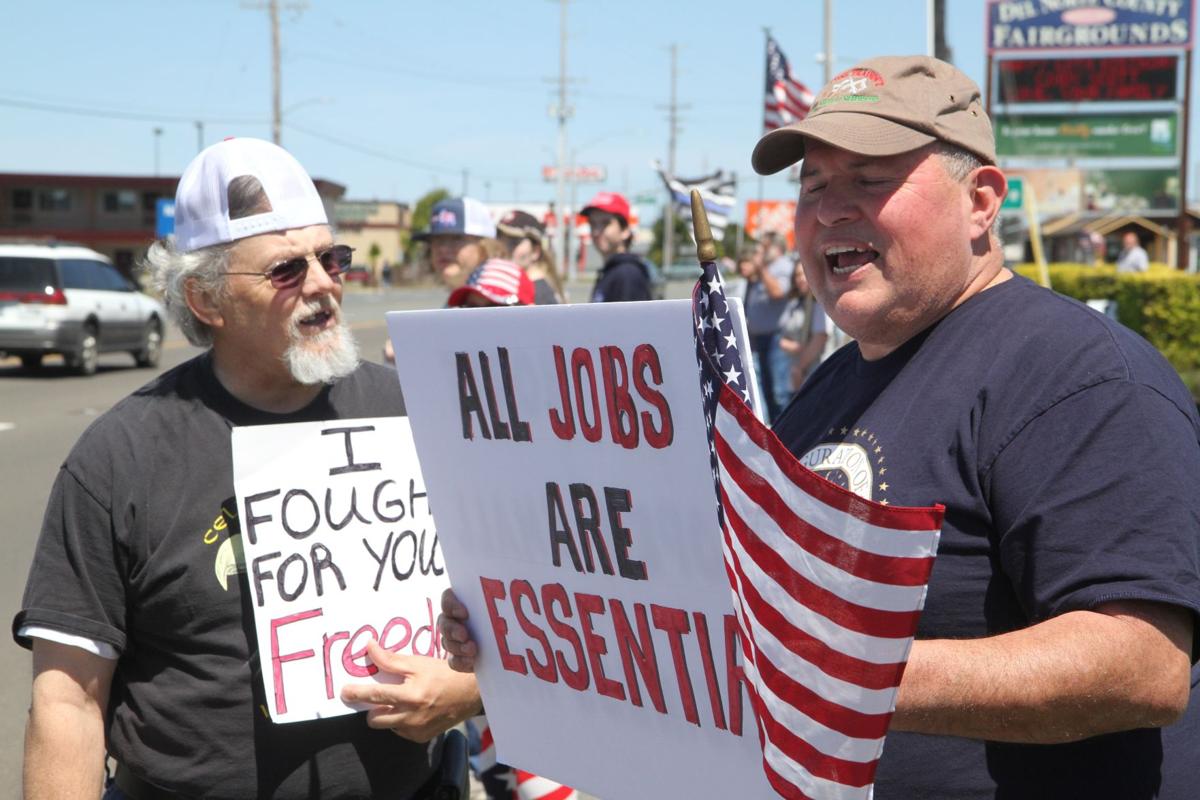 A second round of protestors took to the sidewalks of in front of the Del Norte County Fair May 6 to keep the economic harm the COVID-19 closures are causing in the front of the minds of local community leaders, according to organizer Dean Wilson.

“It’s hard sometimes to get their attention when they’re holding all their meetings on Zoom,” Wilson said of city and county officials. “We should be self reliant, doing what’s best for Del Norte County. Just like Modoc County did, Tehama County, some of these other counties that opened up regardless of what Sacramento told them to do, because one size does not fit all. What’s happening in Los Angeles and San Diego counties with COVID-19 outbreaks we don’t have those kinds of problems in our community.”

More than 100 protestors holding signs and flags, drew honks of support from passing motorists and truck drivers. This protest drew a wide representation of the community affected by the shutdown. Bailee Gosser, 17, has been forced to take all her College of the Redwoods courses online.

“It’s been a struggle adjusting to everything online. We’re working it out, Gosser said. “Hopefully we can go back in the fall. The city council needs to here this protest message and our professors need to hear that converting things online isn’t the way to go. We’re not getting the same education as in class.”

Ed Salsedo closed his Log Cabin Diner in Klamath for the day to join the protest. Last wee, he was forced to abandon an effort to offer dine-in services after being rebuked by county and Yurok Tribe officials. However, he was at the day’s protest to lend his voice to the bigger picture.

“I think this is for the whole county. We are protesting the state closure by (Gov. Gavin) Newsom and the county closure for going along when they only have three cases and there’s no reason to close the county down for three cases,” Salsedo said. “I’m here to support the county and tell Newsom we’re ready to open up.”

Another protestor in a Darth Vader mask, who supported small businesses, said he wore the mask to remain anonymous for fear of a vindictive reprisal from the community.

“The larger type businesses like Walmart and Home depot are fully open. The small businesses, which are always going to struggle more than the bigger box store, what’s the difference between going to Walmart and practicing safe distancing and doing the same in small businesses?” he said. “It was fine in the beginning to step back, take a breath, figure out what’s going on. Now, at this point, essentially the cure is getting worse than the disease. You’re destroying business life, family owned businesses. You’ve got to open it back up.”

Wilson said he was pleased by the turnout and hopes the community leaders get the message they can’t afford to wait to take action.

“One of my bigger concerns I have is the longer these businesses are closed, the hotels are unable to operate, we’re not going to have the money the local government needs to provide the services that the community deserves,” Wilson said. “Even if they open back up, we’re going to have a segment of the population that’s going to be apprehensive about reengaging. Without the state parks open, we don’t have the things that draw the tourists.”

Ironically, at the same time the protesters were advocating for local loosening of COVID-19 restrictions, Gov. Gavin Newsom was outlining at the state capital in Sacramento how the state is transitioning into his Phase 2 reopening plan. According to the plan, which is detailed online at https://covid19.ca.gov/roadmap, Phase 2 will gradually allow for the reopening of curbside only retail businesses, as well as manufacturing and logistics businesses. Later in Phase 2, there will be a relaxing of retail restrictions, an adapting and reopening schools, childcare, offices, limited hospitality and personal services.

Some communities may be able to move through Phase 2 more quickly as public health officers show their counties are meeting readiness criteria. This includes testing capacity, the ability to contain the virus and possible surges.

While Wilson argued Del Norte County was not a high risk community, County Health Officer Dr. Warren Reywaldt argued the risk factor is exactly what will guide local leaders in determining how soon businesses can begin to relax social distancing requirements. At a town hall meeting on Zoom last week, Rehwaldt said the most high-risk environments include large gatherings of people in an enclosed spaces, such as churches. He added businesses requiring close person-to-person contact, such as barberships, salon parlors and tattoo parlors, are also high risk.

Reywaldt argued for mixing the reopening of high-risk businesses with low-risk environments such as retailers or those requiring outdoor work.

“If we put them all in a group, especially at the beginning, that’s the sure recipe we’re going to have a problem within terms of management,” Rehwaldt said. “We know when we open up, we’ll get more cases. We don’t want to get so many cases all at once.”

Rehwaldt began circulating a draft plan for relaxing local safety measures among city, county and business leaders the week before the town hall meeting. The draft plan allows curbside pickup at retail establishments, but does not yet allow dine-in services at restaurants or bars.

The Economic Resiliency Task is working with local businesses this week to help them meet state guidelines by taking their input help to finalize Del Norte County’s plan for relaxing stay-at-home rules. In addition, the task force hosts webinars that are focused on individual sectors such as personal care services, retailers, tourism and entertainment venues, restaurants and in-home services. This week, the task force is gathering input from organizations that work in congregations and groups, lodging facilities and rentals, gyms and recreation facilities and professional services such as real estate offices and accountants. People can register for the webinars by visiting the Economic Resiliency Task Force’s Facebook at facebook.com/DN.Economic.Resiliency.

Are you in favor of another Covid-19 stimulus payment?