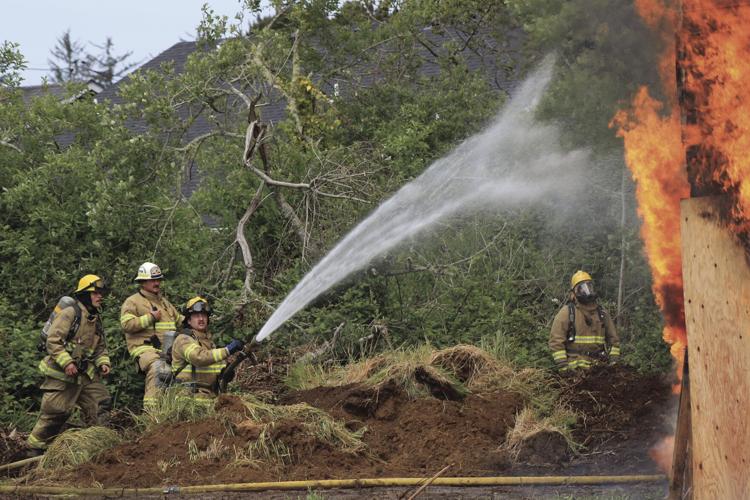 Firefighters from the Crescent City Fire Department spray water on a fire that was started and used for training purposes. Several fire departments came together to use the fire as an opportunity to train. 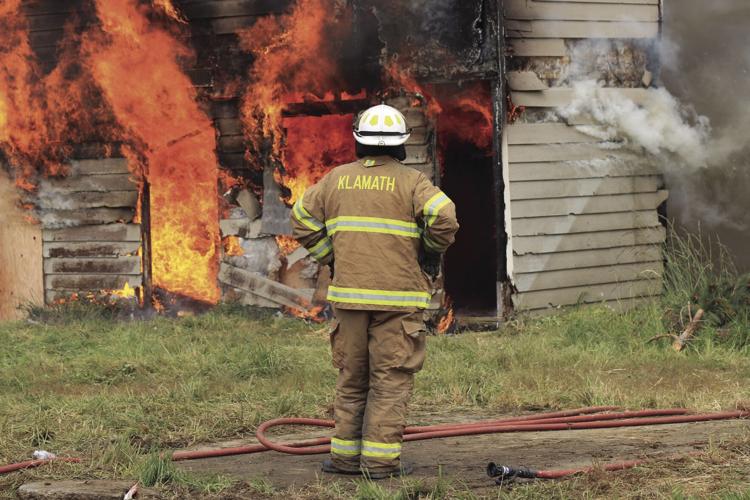 A Klamath firefighter keeps a close watch as a building burns during a training fire in Crescent City.

Firefighters from the Crescent City Fire Department spray water on a fire that was started and used for training purposes. Several fire departments came together to use the fire as an opportunity to train.

A Klamath firefighter keeps a close watch as a building burns during a training fire in Crescent City.

The buildings were slated for demolition, but instead were donated to Crescent City Fire for use as an opportunity to conduct active fire drills. An asbestos removal and mitigation contractor was brought in to remove any of the hazardous material prior to the burn.

The training opportunity allowed firefighters to bring together structure firefighting skills in a controlled environment that demonstrates realistic fire conditions with a specific and manageable fuel load.

Fire departments regard this kind of training as significant as it allows crews to practice their honed skills, such as hose lays, hose and water deployment, extinguishment, search and rescue and fire behavior.  It also allows for practice in pumping, water supply management and incident command.

Onlookers gathered on Pacific Avenue shortly before 9 a.m., some bringing folding chairs to get more comfortable. Curious children marveled at the abundance of fire trucks and equipment. A few more adventurous people were ordered by officials to move back to a safer distance. Many in the crowd were the wives and children of firefighters who participated in the training exercise.

Crews affixed fire blankets to neighboring fences to prevent unintended damage from the heat and embers.

Chief Bill Gillespie mustered the firefighters at approximately 10 a.m. to give a safety and plan-of-attack briefing prior to the start of the exercise.

Old wood pallets and bails of hay were placed inside the gutted structures and ignited to conduct interior tactics training in heavy smoke conditions. Once the interior training had concluded, both buildings were set alight.

Heavy smoke turned to visible flames in a matter of minutes as both structures were immolated. Even though situated far back on their Pacific Avenue lot, the engulfed buildings gave off tremendous heat that could be felt from across the street.

Crews attacked the blazes from multiple ground positions, following the guidance of senior firefighters and commanders. Despite a valiant effort to extinguish the inferno, the two-story apartment suddenly collapsed in dramatic fashion in less than 30 minutes. The one-story duplex proved more resilient and burned slower.

As afternoon arrived, crews were busy dosing hot spots and mopping up the charred remains of the buildings. A front loader was brought in to assist with the cleanup when training concluded. Firefighters were debriefed and provided refreshments.

By the end of the day, the safe and successful exercise gave crews invaluable firefighting practice, and a chance to share tactics with members of other departments. Residents got to see our local first responders, which included many volunteers, hard at work.