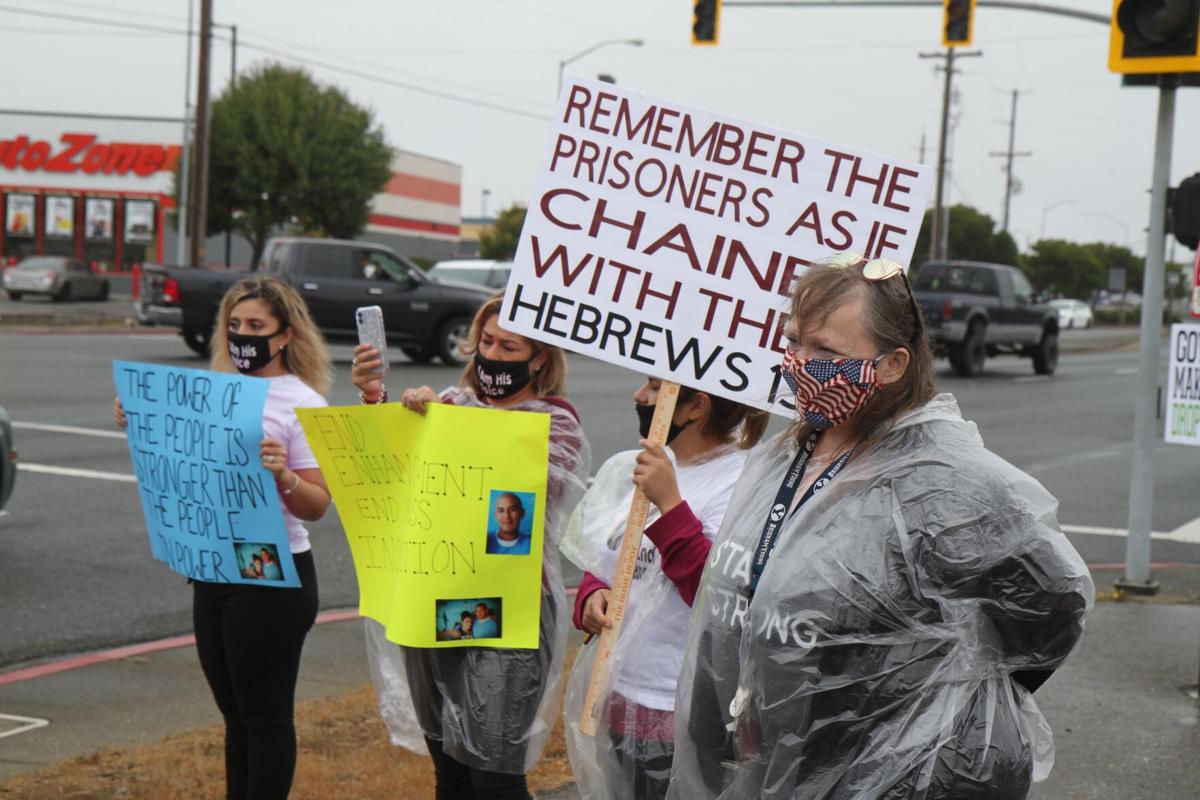 Crescent City resident Debbie Gherke (far right) joined with others involved with "We Are Their Voices" at a rally Aug. 21 to support inmate rights. 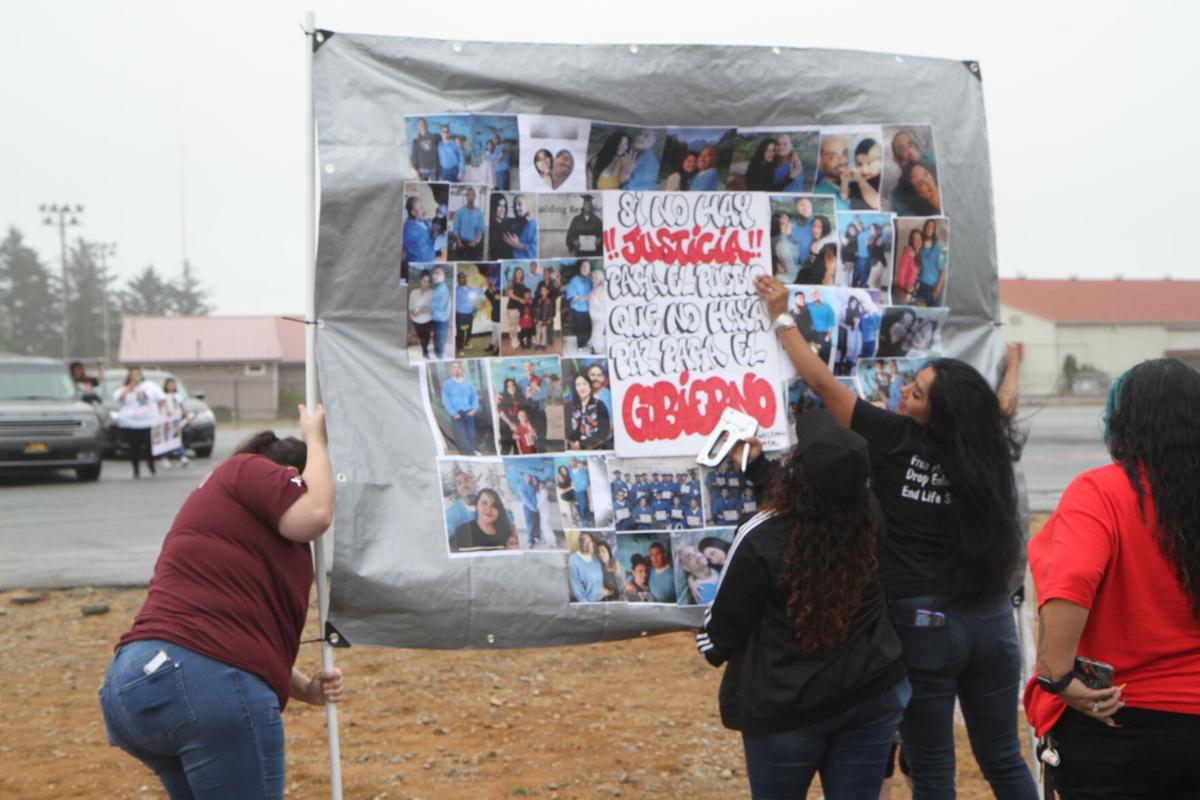 "We Are Their Voices" set up a banner Aug. 21 showing support for their incarcerated spouses across the state. 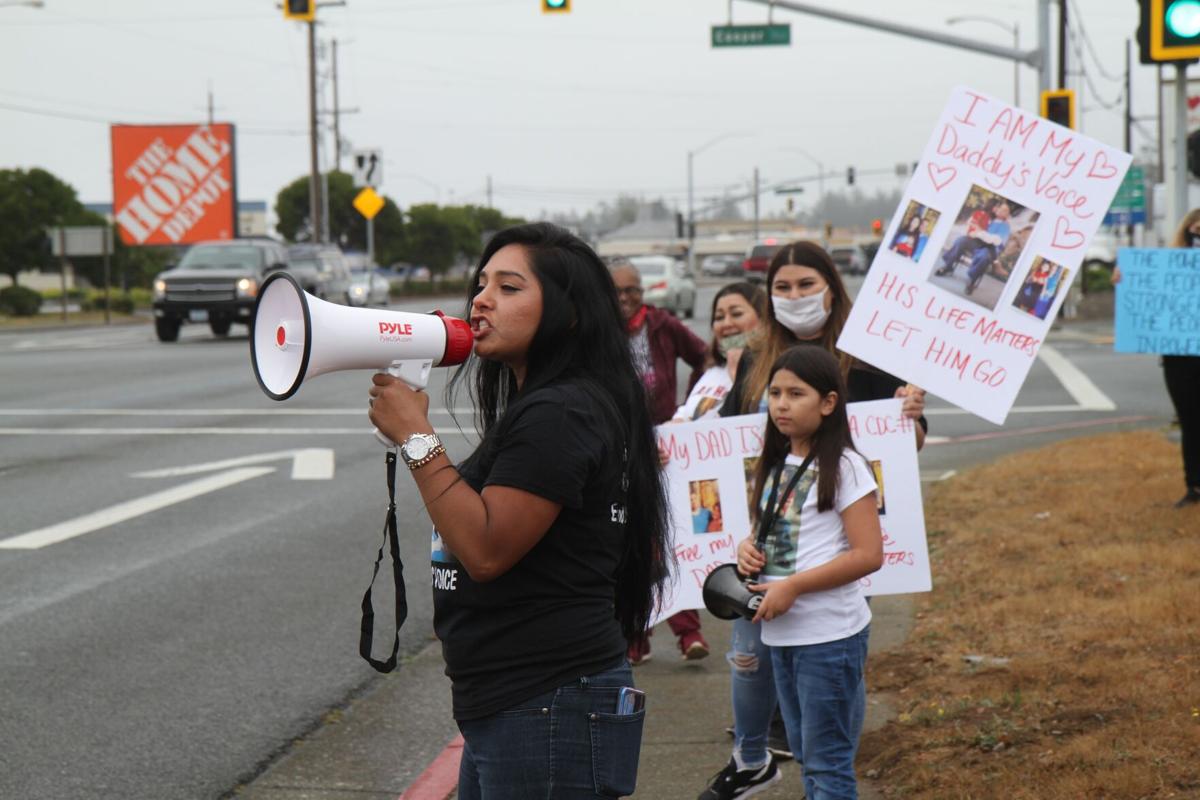 Sylvia Guzman uses a bullhorn to get support from motorists passing by the Del Norte County Fair Grounds Aug. 21. 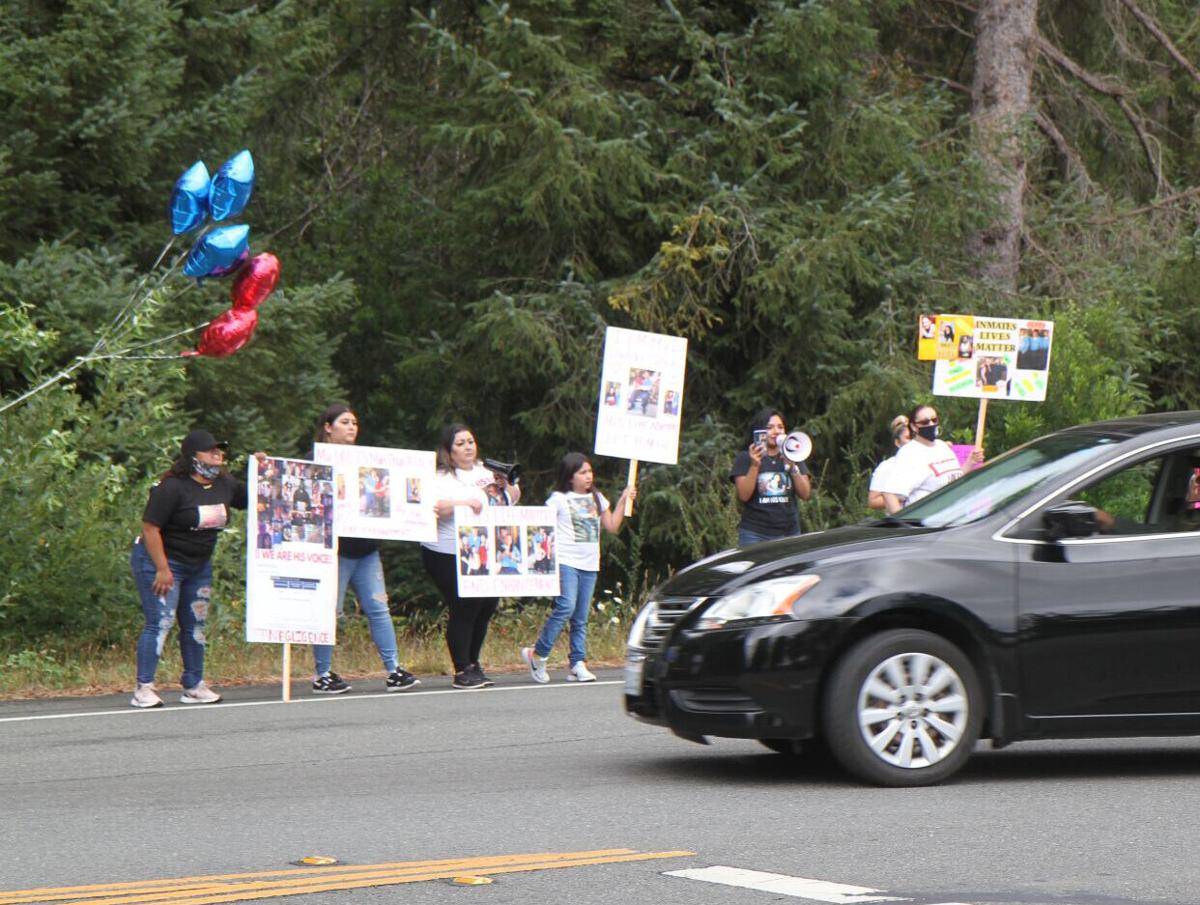 Members of We Are Their Voices try to get a staff member of Pelican Bay State Prison to honk Aug. 21 in support of their demonstration in support of inmates’ rights.

Crescent City resident Debbie Gherke (far right) joined with others involved with "We Are Their Voices" at a rally Aug. 21 to support inmate rights.

"We Are Their Voices" set up a banner Aug. 21 showing support for their incarcerated spouses across the state.

Sylvia Guzman uses a bullhorn to get support from motorists passing by the Del Norte County Fair Grounds Aug. 21.

Members of We Are Their Voices try to get a staff member of Pelican Bay State Prison to honk Aug. 21 in support of their demonstration in support of inmates’ rights.

The weather may have been less than ideal for a protest, but about 16 people involved with the “We Are Their Voices” movement didn’t let a little rain dampen their spirits Friday, Aug. 21. They were in Crescent City for a rally, march and protest in support of incarcerated loved ones at Pelican Bay State Prison.

The plan for the day had included a rally at Beachfront Park and march to City Hall before a mid-afternoon protest in front of the prison. Demonstrators moved the first phase of their protest away from City Hall, after learning how little traffic passes by there. Instead, they set up in front of Del Norte County Fair Grounds. Many motorists honked in support of We Are Their Voices.

Some of the protestors had traveled long distances in an effort to gain support for concerns about issues faced by their husbands and sons as state prison inmates.

Sylvia Guzman wore a t-shirt with a photo of her and her husband under the message “I Am His Voice.” She traveled 11 hours from Santa Barbara to help organize the Crescent City events. She said the movement formed in July and already has held rallies at 85 percent of the prisons in the state.

Guzman said she joined the group because she believes her husband, Andrew, was falsely convicted and that systemic corruption led to his conviction when his was 16 years old. Her involvement with the movement has helped her see that others are going through some of the same things she has experienced with a loved one who is incarcerated, she said.

Crescent City resident Debbie Gehrke is a local liaison for the movement. She met her husband Jessie, currently serving out a sentence for first-degree murder at Pelican Bay, through the Innocence Project.

“He’s been taking classes through the College of Redwoods and his first parole hearing is in 2023,” Gehrke said. “His goal is to have everything done he needs to accomplish for parole, and he already has.”

She said she affiliated with “We Are Their Voices” online because as a member of the Inmate Family Council she is used to other spouses reaching out to her, asking questions.

Gehrke said her pet peeve is that the California Department of Corrections and Rehabilitation releases inmates back to the jurisdiction where they committed the crime, even if they have family nearby the facility where they finished their sentence.

Although many of the rallies organized by “We Are Their Voices” have focused on issues related to COVID-19 in prisons, Gehrke said she tried to steer those planning the Crescent City events away from virus-related concerns.

“I tried to steer them away from COVID complaints,” she said. “They’re doing good here. I told them to stick to their other issues — three strikes law, overpopulation and enhancements.”

Enhancements, or aggravating factors, allow — and sometimes require judges — to increase a defendant’s sentence, such as for gang affiliated crimes, prior convictions and use of weapons.

Victoria Pelayo, from San Joaquin Valley, said her husband Claudio will be up for parole in two years. He was transferred to Pelican Bay in February. She said he would have already finished his sentence if not for a 10-year enhancement for gun possession.

“It’s putting our loved ones on the line because there’s nothing they can do about it, they’re stuck there,” she said.

Bernadette Guzman, drove up from Los Angeles to be her son Andrew’s voice and help her daughter-in-law Sylvia. She is worried that prisoners have been moved around too much during the pandemic, adding to the spread of the coronavirus. She also said she is concerned about the staff bringing COVID-19 into the prison.

“I thank God my son is in a one-man cell. He doesn’t have to deal with anybody,” Bernadette said. “Thank God he is a neat freak.”

According to the CDCR’s latest employee tracker, 28 cases have been confirmed and 18 staff have returned to work. Meanwhile, there have been no cases among Pelican Bay’s inmates.

CDCR regularly reports on COVID-19 activity and steps it has taken to manage the prison system during the pandemic on its website, cdcr.ca.gov. A July 1 memo addresses the requirement that staff wear facial coverings and outlines disciplinary procedures for supervisors to follow if they don’t — and points out that some staff may have medical reasons for not wearing masks.

The department also has been criticized for some serious errors that resulted in spread of the disease between facilities due to inmate transfer. Locally, the Del Norte County Public Health Officer has expressed his approval of precautions taken at Pelican Bay in those cases where inmates are brought into the prison. CDCR has closed intake from county jails indefinitely. And since March 12, the inmate population of California state prisons has been reduced by 18,252 as a result of accelerated release programs of various types.

Still, there are 96,066 incarcerated persons in California’s prisons – and 1,258 incarcerated persons with active cases of COVID-19 statewide. Data from Aug. 20 shows that 29 state prison inmates with the virus are hospitalized in community facilities. As of data reported Friday, there were 1,261 active employee COVID-19 cases statewide (CDCR and California Correctional Health Care Services). There have been 55 inmate deaths reported and 10 staff deaths.

“We Are Their Voices” plans more protests around the state, culminating in a large finale event in Sacramento, sometime in October.

Bernadette said the drive is worth it to support their loved ones, with Sylvia agreeing.

“And let them know that we have their back, that there’s people here that do care about them,” she said. “And for anybody who doesn’t have anyone out here, we’re also their voices.”

To learn more about “We Are Their Voices,” go to the movement’s Facebook page.