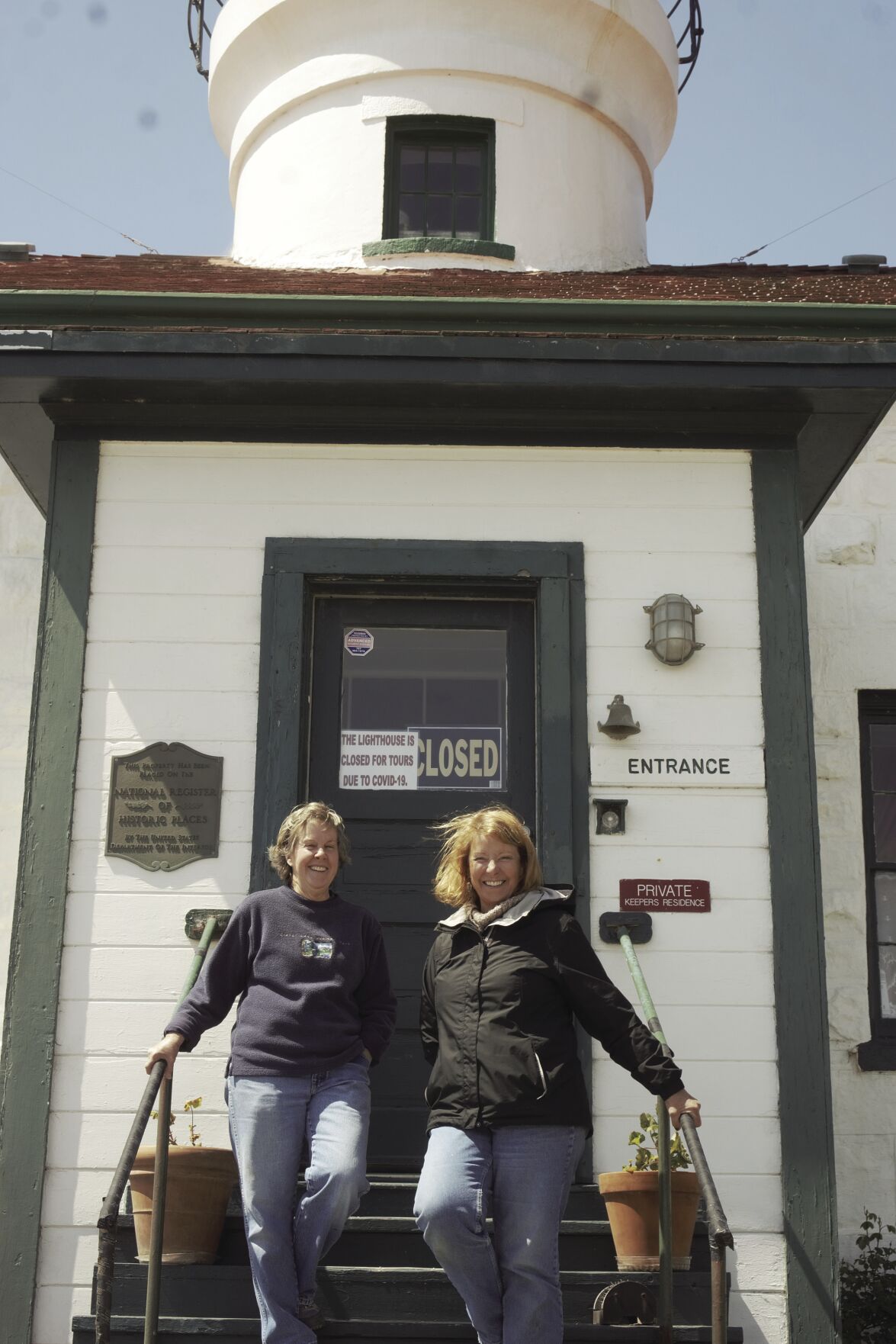 Kittie Harrison (left) and Donna Butchino (right) are the current live in volunteers at the Battery Point Lighthouse. 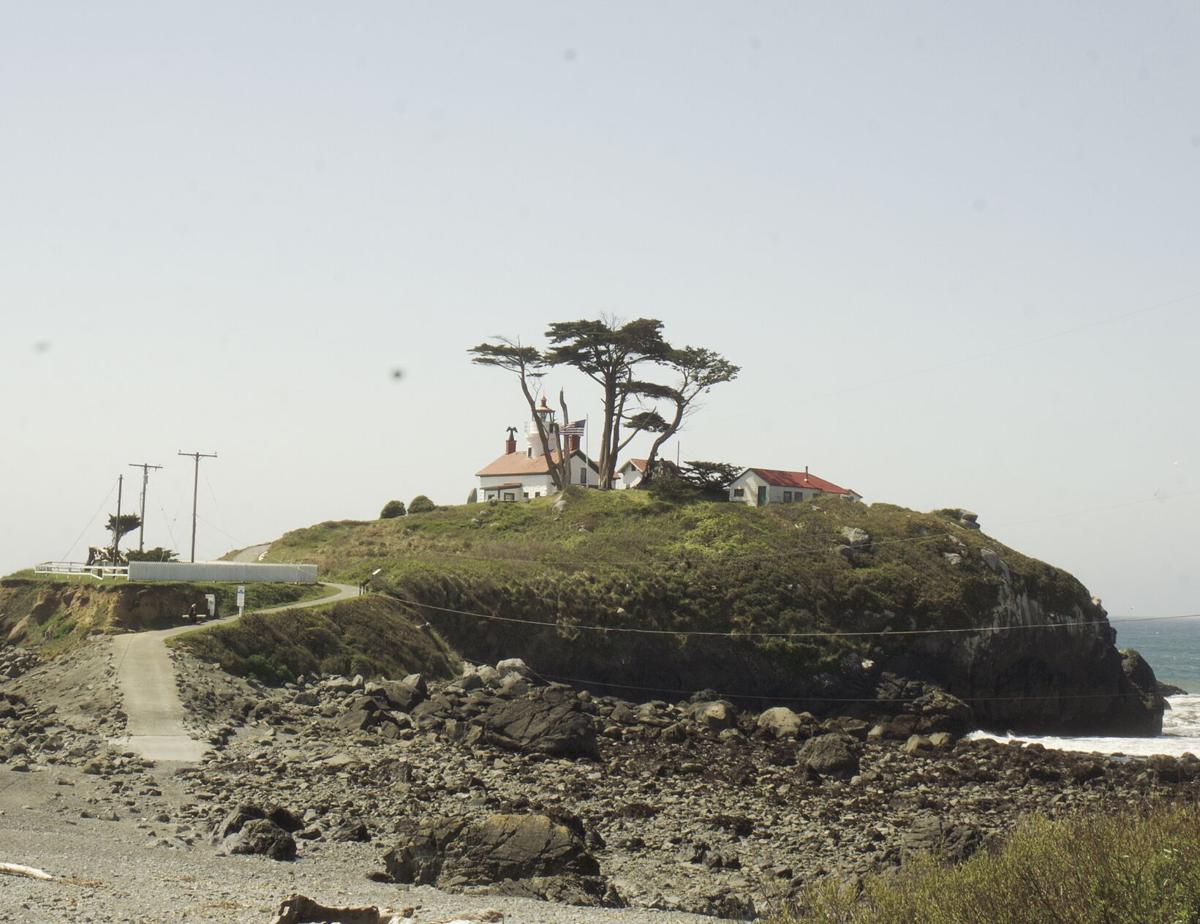 The lighthouse was built on a rock piling 77 feet above sea level. It is only accessible during low-tide.

Kittie Harrison (left) and Donna Butchino (right) are the current live in volunteers at the Battery Point Lighthouse.

The lighthouse was built on a rock piling 77 feet above sea level. It is only accessible during low-tide.

Rising high above the surf, the Battery Point Lighthouse has been a fixture of Crescent City since it was built in 1856. But, who lives there?

As the current live-in keepers, Butchino and Harrison are responsible for maintaining the lighthouse and its grounds. Beyond replacing the beacon lightbulb once every couple of months, keeper duties include landscaping, painting and in non-COVID times — lighthouse tours and gift shop duties. For now, they give keeper talks instead, which provides visitors with the history of the lighthouse, without the actual tour. The keepers live in the two-bedroom lighthouse for one month, and then a set of new volunteers take their place.

Harrison decided to get involved after she and her husband visited Battery Point from Southern Oregon.

“We came here on a trip and the gal at the gift shop told us about it and I thought, ‘What the hell, I’ll put in for it,” said Harrison.

When she heard she landed the position for July, Harrison was ecstatic. While she had planned to do the volunteering with her husband, she soon found out the lighthouse keeper’s life was not for everyone.

“First time here, you just fall in love. Well, you either like it or you don't. My husband couldn’t stand it,” said Harrison.

After her husband dropped out, Harrison called Butchino to ask if she would be willing to fill in — she was.

“I said, ‘Sign me up. Absolutely.’ I didn’t even know it was on my bucket list, and it is now,” said Butchino.

The last paid lighthouse keeper, Wayne Piland, moved out in 1953. Since then, Battery Point has been run exclusively by volunteers, except for a stent from 1965 to 1969 when the Coast Guard operated it. Now, the Del Norte Historical Society is responsible for the lighthouse and finding volunteers to run it. Turns out they are pretty easy to find.

“There’s people from all over the country who volunteer to come and do this. There’s a four year wait list, and I think they closed it down now,” said Butchino.

While their work at the lighthouse can be a lot of fun, it comes with challenges also, said Harrison. They put their lives on hold to come to Battery Point and work long days, usually with swarms of visitors buzzing around them.

“You have to like people because they are here constantly,” said Butchino.

Their current projects consist of repainting the lighthouse basement, as well as the roof of the boathouse — which recently blew off during high winds — all the while educating visitors about the lighthouse.

Still, Harrison said she wouldn’t trade this experience for anything.

“We’re living in a museum, and it’s kind of cool,” said Harrison. “Sometimes it’s spooky, it’s just an awe of history here, but it’s an outstanding experience, it’s just a thrill. Look at the view.”

“We are in need of much more funds than we have in order to maintain this, so it lasts another 165 years,” said Butchino. “This is truly a treasure, not just for Crescent City, but the West Coast and the nation.”

For information or to make a donation, contact the Del Norte Historical Society 707-464-3922.

Are you traveling this summer?

Eruc plans to row from Crescent City to Hong Kong

Eruc plans to row from Crescent City to Hong Kong