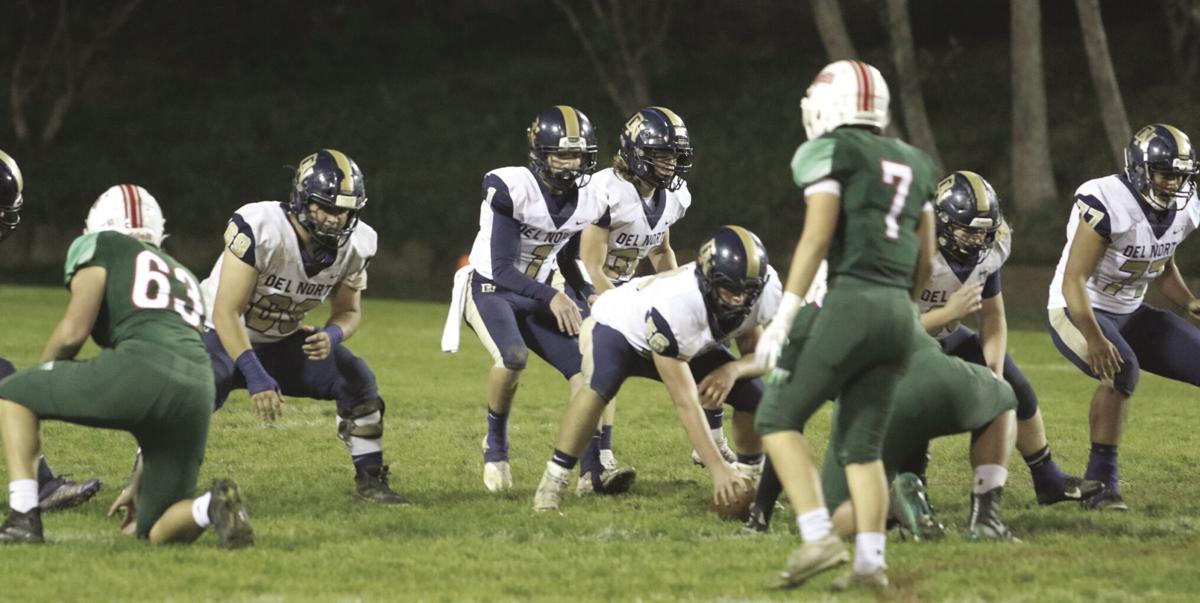 The Del Norte Warriors broke open a tight game with a big second-half performance at Eureka High on Saturday night, on the way to a 27-14 win.

The victory was the fifth straight on the football field for the Warriors, who improved to 5-1 on the season and 3-0 in the Big 4 halfway through the conference schedule.

With the game tied 7-7 at halftime, the visiting Warriors took control in the second half, piecing together three long, time-consuming touchdown drives with their relentless running game.

“That was Del Norte Warriors football in the second half,” head coach Nick White said.

It took the Warriors a little time to get going, with five of their six first-half drives stalling, including two on turnovers.

Once they found their rhythm, however, they quickly took control and never looked back.

Junior RJ Loftin was instrumental in the win, running in for two of the three second-half TDs and also making some big plays at linebacker.

The entire defense had an outstanding night once again, nullifying a Big 4 opponent’s running game for the second straight week.

“RJ really stepped up and ran really hard all night, and we needed him,” White said. “And he played really well on D. Honestly, our whole D played outstanding. It kind of carried over from last week against Fortuna.”

After the Loggers had opened the scoring on a TD pass from quarterback Hans Chalmers to receiver Payton Harbin early in the second quarter, Del Norte answered immediately, marching 60 yards on six plays and finding the end zone on a 44-yard TD pass from QB Cooper Maxwell to Giancarlo Desolenni.

Neither team was able to add to their tally for the remainder of the opening half, with a series of quick three-and-outs following.

The second half, however, belonged to the visitors, who scored on their first three drives of the half before running out the clock on their final possession.

“They responded to the challenge,” White said of his players. “We asked them, what team are we? Are we the team in the first half, or do we want to be the team that played against Fortuna last week?”

Loftin scored on a pair of short runs to cap long drives, before Isaiah Parsley closed out the scoring for Del Norte when he pulled in a 12-yard TD pass from Desolenni with just under three minutes remaining.

The home team would add a second TD in the final minutes, but it was too little too late.

“This was a grind-it-out, old school game of football,” White said. “But we like that kind of game.”

The 5-1 Warriors’ only loss of the season came on opening night against a good Enterprise team, and they are now in control of the Big 4 with three games remaining.

“We’re on a roll,” White said. “We’re getting there and doing the things we need to do.”

A league title will guarantee the Warriors at least one home playoff game.