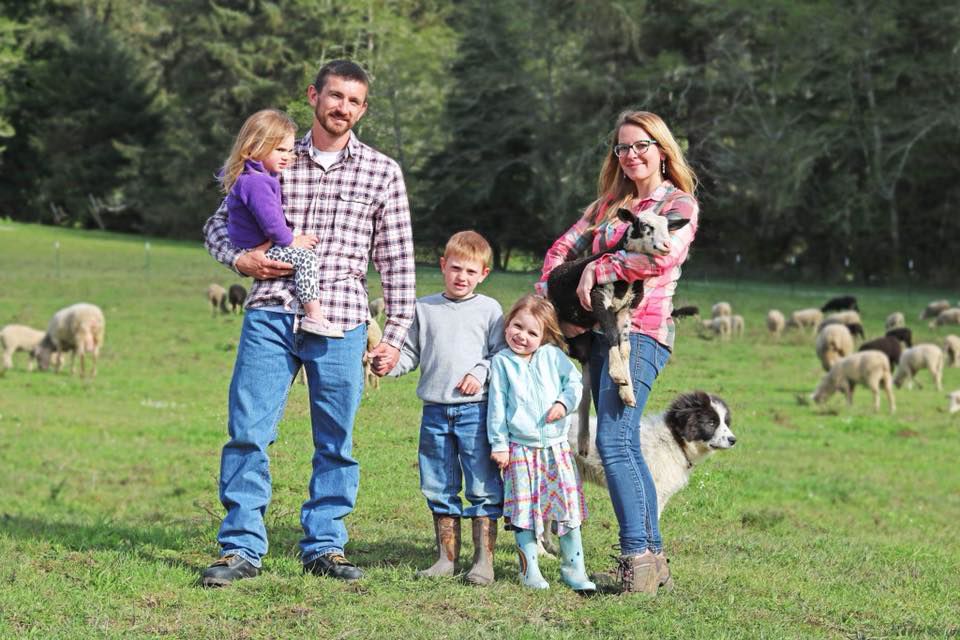 Jesse and Tera Wood, with their children Abigail, Noah and Charlotte (from left), have seen their small farm hit hard during the COVID-19 pandemic. 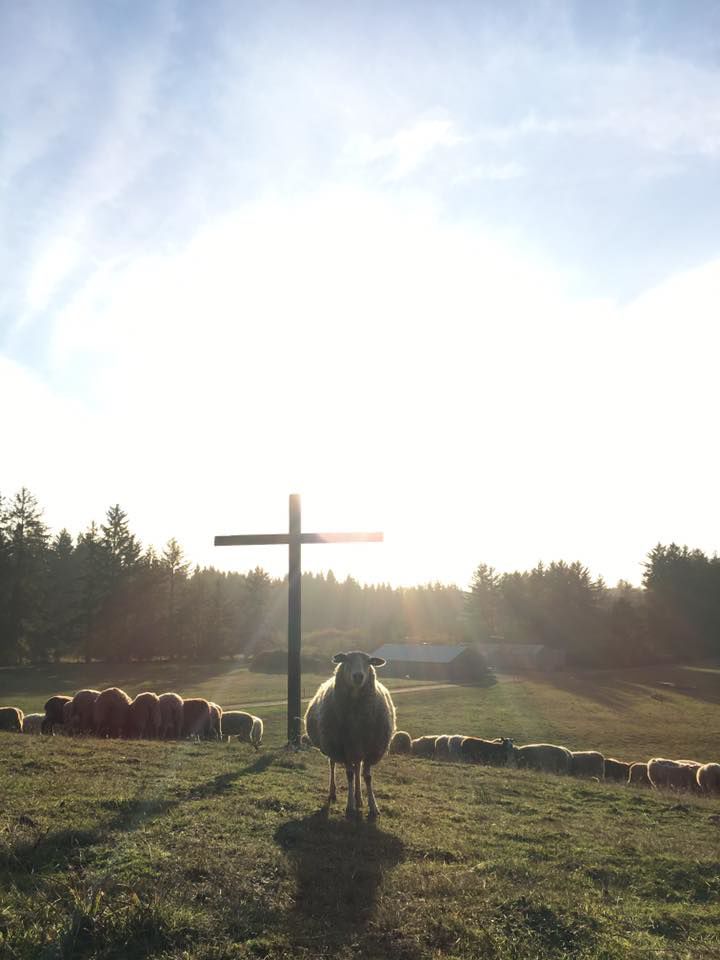 The Woods raise sheep, pigs and cattle on their farm in Crescent City. 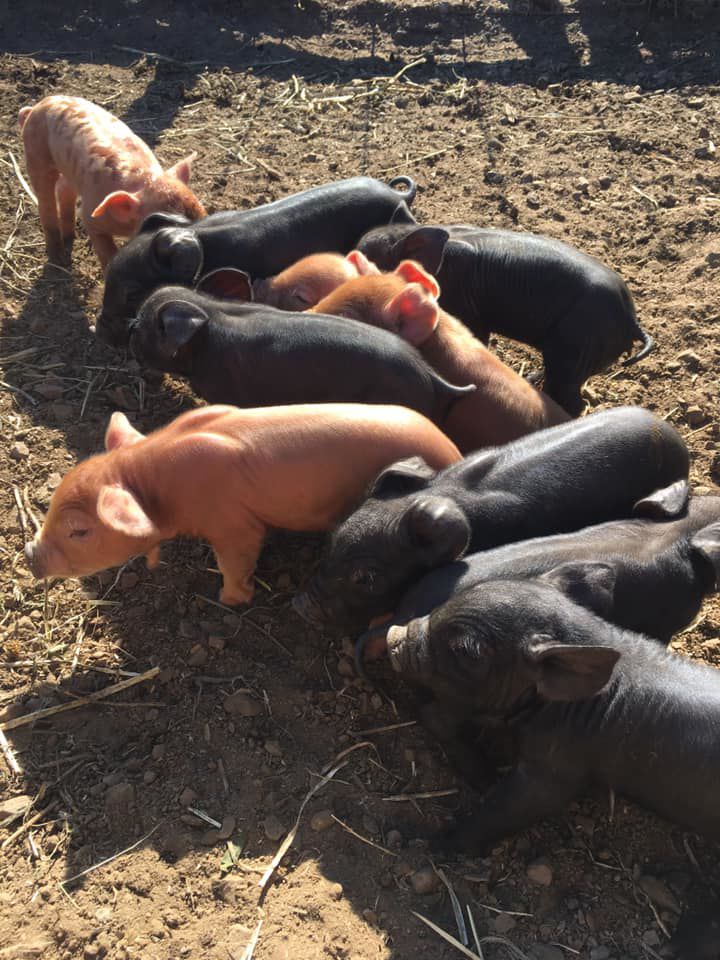 The Woods are selling their market animals now so they can make it through the COVID-19 crisis.

Jesse and Tera Wood, with their children Abigail, Noah and Charlotte (from left), have seen their small farm hit hard during the COVID-19 pandemic.

The Woods raise sheep, pigs and cattle on their farm in Crescent City.

The Woods are selling their market animals now so they can make it through the COVID-19 crisis.

Last week, Jesse Wood stood within the boundary of his new 70-acre farm, feeding hay to his 300 or so East Friesian sheep.

As the co-proprietor of Woodhaven Farms with his wife Tara, Wood was both amazed, thinking back to their start with just 30 sheep while still attending college, and terrified at the uncertain future of their industry if the economy doesn’t open back up from the COVID-19 shutdown.

Wood, 34, grew up in Crescent City. He and Tara started Woodhaven Farms when they were still in college, “because I need to do things with my hands or I get bored,” Wood said.

“We decided what’s better than starting the business we wanted right now in school and we can practically apply what we’re learning in class. I’m an animal science major, wife is major in microbiology,” Wood said.

Tara was going to be a veterinarian, he added but concentrated on raising the family instead.

They chose to raise a dual-purpose breed of sheep rather than a single-purpose dairy cow or beef cow.

“Other parts of the world, milking sheep is more common than milking cows or goats. Their production is ideal for a family or a small town to have few of those sheep, where a cow produces tons and has a lot of high feed requirement. Sheep are browsers, more sustainable, makes you think about natural ecosystem and how they work,” Wood explained.

In addition to the sheep’s milk, he also uses the sheep to produce wool and lamb.

They initially ran their farm as a side job for the bulk of time they grew their business because Wood said it takes a ton of capital to start an ag business.

“It takes a lot of infrastructure to produce a living wage. Most small farms these days, somebody works off the farm. My wife and I worked for the City of Crescent City for a long time. We finally committed to running the farm full-time as it became way too much for a side job,” he said.

The big focus in their business plan was to do something niche, and different and fun. The sheep was a way into that.

“My heart was into dairy science but starting a cow dairy costs millions of dollars. So, this was our way of getting our foot in the door. My family always raised sheep since I was a little kid. Plus, I was very familiar with working with at a cow dairy, so we just kind of put the two together,” Wood said.

What it took to get started was putting 30 sheep to work in Chico on ground that they didn’t even pay for. The Woods did odd jobs for people, running some sheep on the property until the grass was gone then moved them to another property.

“They’d be under an almond orchard; our lambs would be grazing and I’d go prune some trees for them. It was nuts. We didn’t even have a home base. That’s how we started,” Wood said.

“So, it was a dream come true to get seven acres in Fort Dick with a beautiful irrigation well and good soil and good grass. It worked well for us until we got the beef really going. You can’t have 20 cows on seven acres. So, we were able to branch out over here,” he said, indicating the 70 acres off Elk Valley Road.

In addition to the sheep, they’ve own pasture-raised pork and grass-fed beef. But because of the time of year, they only have the sheep and some chicken on the farm now. They’ve also raised free-range turkeys, timing them toward Thanksgiving. Last year they sold 350 turkeys for the holiday.

“The COVID-19 kind of blindsided us with the whole new issue,” Wood said. “We had the whole thing sorted out. The dairy was ready to go. We had a milk buyer. We had a contract two years before we ever bought the sheep. And here we are with no market. We have a large inventory of it ready to go.”

Luckily, Wood said sheep’s milk is unique — it can be frozen, which doesn’t destroy proteins and other components like it would with cow or goat milk.

“We have a whole freezing process at end of the milk process. We have been stockpiling it to ship, but now we don’t have anywhere to ship it to. That’s a big hiccup in cash flow like a lot of people are experiencing in every business that’s around,” Wood said.

However, Wood said the scarier part is the problems at the macro level. The coronavirus has broken out in hotspots along the distribution chain, especially at processing and packing plants, causing them to close.

“We network in agriculture and have friends all over the place,” Wood said. “There’s dairymen with hundreds of cows that are producing milk and it’s getting dumped down the drain. There’s farmers that have produced beautiful crops that are getting plowed into the ground.”

Wood said the problem goes beyond distribution, which leads to shortages on grocery store shelves. He explained there’s a factory problem people aren’t realizing that doesn’t have an easy fix.

“We can socially distance in our lives in Del Norte County that’s really easy for them to see how that would work. But if you live in a city, you can understand the differences there from where we live. Then you take that factor to a meatpacking plant,” he said.

Workers at a meat processing plant work tightly together, side by side, like a machine in an assembly line, Wood explained. Each worker has one specific cut they make all day long. The way it’s set up, they can’t be spaced more than a foot apart to social distance them.

Wood further outlined the problem, pointing to a packing plant up north.

“There’s a farm we know that raises thousands of head of sheep, they send all their lamb up there. They closed the plant down because out of something like 4,000 workers, they had 100 COVID cases,” Wood said. “People don’t realize when they go to the store and don’t have a steak to buy, there is a laundry list of farmers facing bankruptcy over the next few months if this doesn’t end quickly.”

Wood said the slaughterhouse that had the appointment to kill all their friend’s cattle and all their sheep and pigs closed its doors. Just the pigs alone were scientifically raised to be at this exact stage to be sent to market. Now they’re over fat, too large, getting too rank to use, depending on the animal.

“That means the pen at the feedlot is full, they can’t buy cattle at the other end and start feeding them. And they never would because there’s no market for them. The feedlots could be facing bankruptcy because they’re a low-margin business. There’s multiple millions of dollars in and out every day, but their margins are slim,” Wood said.

While the situation scares the Woods, they’re trying to remain optimistic, especially since they operate at a much smaller scale than the big farms facing bankruptcy.

“My wife and I are where we are because we move and adapt and change as we need to. That’s what we’re trying to in this,” he said.

What works well in their model, Wood explained, is they don’t just want to provide their product from birth to the dinner plate on their farm. Rather, they wanted to be the person who handed it to the customer, which included selling it directly at farmers markets and county fairgrounds.

However, Wood is uncertain of the farmers' market immediate future, which starts June 1, whether it’ll be delayed or not happening at all for the whole season. So, they decided to pull the plug and start selling everything they have right now because people need it right now.

“Generally, we sell sides of beef, quarter beef, 100-pound packages of meat all the time. We started out with little, 100-pound boxes so we can distribute our product as wide as we could. We’ve been very busy,” he said.

Their beef has to be USDA inspected. USDA approved processing plants are rare and those are the ones closing down all over the place, Wood said.

“While we still can, we’re still producing as much as we can and get it out to the customer,” he said.

He normally concentrates on delivering orders to local customers in Del Norte and surrounding counties of Curry and Humboldt but has had to narrow his scope to Crescent City, Fort Dick and Smith River. Residents in Gasquet and Klamath can arrange pickup at the farm or somewhere convenient for them in town. He’s had to turn down customers in Brookings and Gold Beach because the supply is limited and he’d rather take care of the home towners first.

Wood figures they have enough supply to get them by for now. But if the shutdown lasts much longer, they’re weighing such options as weening the sheep off their normal feed so they don’t produce milk again until needed. They’re also looking into which seasonal meat to concentrate on next, be it chicken and turkeys or pigs and beef.

“For me, this is just a huge lesson in food security. I’m a lot less worried about do I use tissues or toilet paper to get by as I am the people are going to the grocery store looking for a steak that may be there this week and not next,” he said.

Do you think voting only by mail is secure?