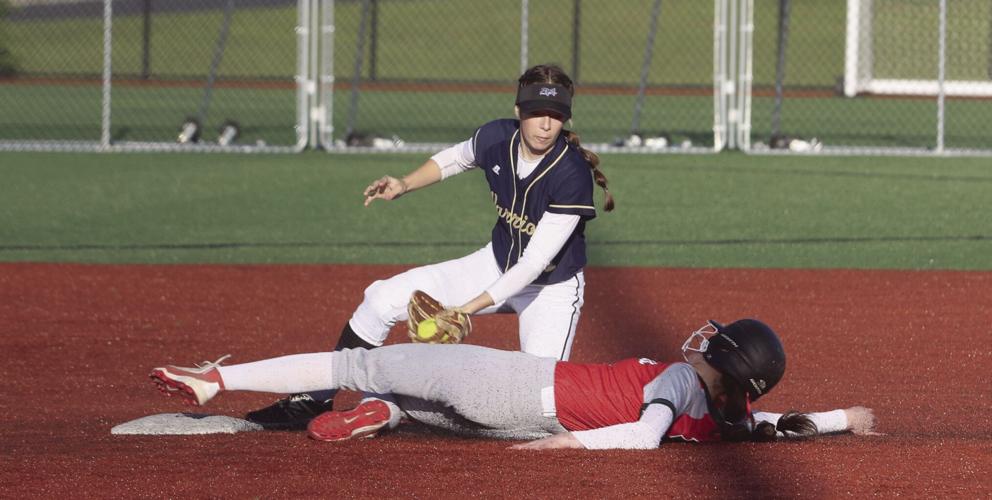 Del Norte shortstop Josephione Heuberger applies the tag to a base runner during a recent game. As the only senior on the Del Norte softball team, Heuberger has been a leader on and off the field.

The Del Norte Warriors are young but improving every week.

Del Norte shortstop Josephione Heuberger applies the tag to a base runner during a recent game. As the only senior on the Del Norte softball team, Heuberger has been a leader on and off the field.

The Del Norte Warriors are young but improving every week.

A young Del Norte High softball team appears to be peaking at an opportune time, as the Warriors get set for the North Coast Section playoffs, which begin this week.

Head coach Jackie Heuberger believes her team played some of  its best ball down the stretch of the regular season, as the Warriors closed out the Big 5 with a record of 7-5 (14-8 overall).

“This is a very young team,” Heuberger said. “And they’re a very hard-working team, and they get better every day. They continued to play their best ball toward the end of the season.”

The Warriors have 17 freshmen and sophomores combined on their roster of 23, with just one senior on hand — shortstop/utility player Josephine Heuberger.

That lone senior, however, has played a pivotal role for the team this year and is one of the most experienced high school players in the North Coast, having played several years of travel ball in Utah and California.

And that experience and knowledge of the game has been beneficial for the team.

“She has a very good softball IQ,” her head coach and mother said. “And her versatility. She can play anywhere.”

Josephine, who is batting .475 this season, intends on continuing her career at the collegiate level, but is still considering her options.

For now, however, she has some unfinished business to take care of on the high school fields, as the Warriors get set for the section playoff tournament, which returns for the first time since 2019.

The Del Norte girls will find out their seeding for the Division-IV bracket on Sunday, but as the No. 2 ranked team in their division, according to MaxPreps.com, they can expect a fairly high seed and at least one home game.

In addition to the play of Josephine Heuberger, the success of this year’s team has been predicated on the play of several other players, including pitcher McKenna Curtis, who has been a consistent force in the circle.

She’s also a player who embraces her role, whatever that might be.

“She’s a hard worker,” the head coach said. “McKenna just puts out 150 percent all the time. She’s always having conversations about what she can do better. She loves to play and will play any position when she’s not pitching.”

Curtis also has been a positive influence on her teammates.

“She’s a really good leader on the field too,” Jackie Heuberger said. “She does a great job of staying positive.”

Fellow sophomore Reece White also has been instrumental in the Warriors’ success and is batting a team-best .482 with a co-team-best six doubles, as well as providing a reliable glove in the outfield.

“She’s developed into such a great outfielder, and her bat is coming around,” the head coach said. “She has been a huge asset for us in the outfield with the amount of ground she can cover.”

Catcher Alexis Heuberger is the younger sister of Josephine and another sophomore who has played a key role for the team on both sides of the plate.

“She’s a very smart player,” Jackie Heuberger said. “And she has a wonderful relationship with her pitchers. And one of the things I like about her is she always makes friends with the umpires.”

The younger Heuberger has been an RBI machine for the team this spring and has driven in a team-high 16 runs, almost twice as many as any of her teammates, while batting an impressive .450 with six doubles.

All in all, it’s been an enjoyable spring for the Del Norte girls and it should get even better.

“This team has worked super hard and has good chemistry,” the head coach said. “And they appreciate each other’s hard work. They just continue to get better.”