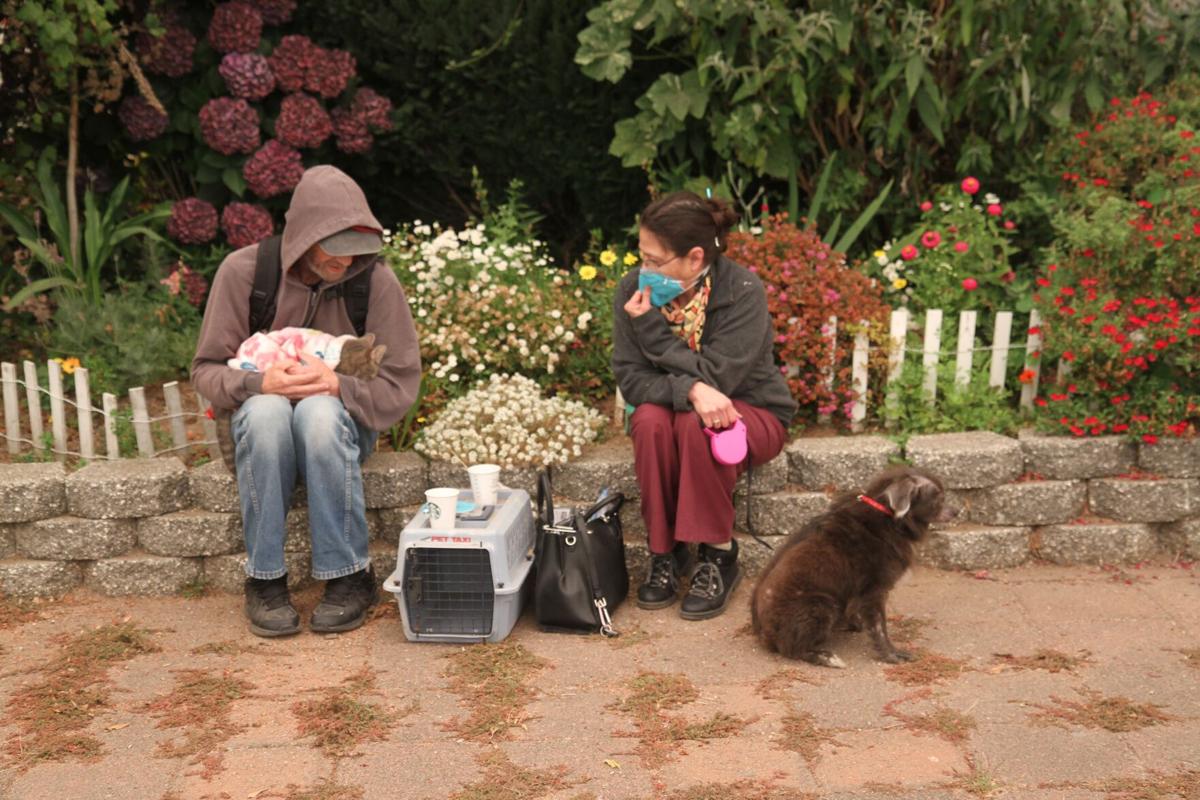 Gasquet residents Ken and Natalia Smith await news of what’s next for them after evacuating Wednesday with little more than their dog BB and cat Noodle. 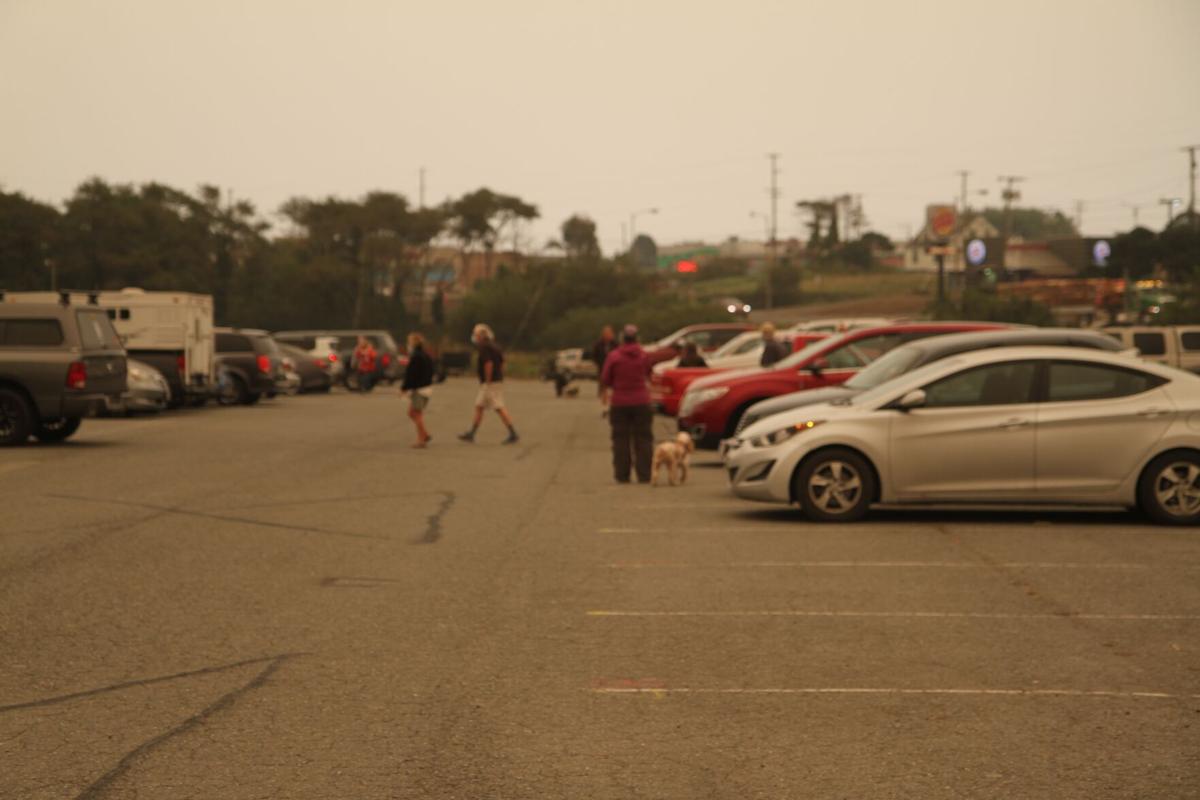 Gasquet residents arrive Wednesday morning to the Del Norte County Fairgrounds in Crescent City after being evacuated due to growing wildfires. 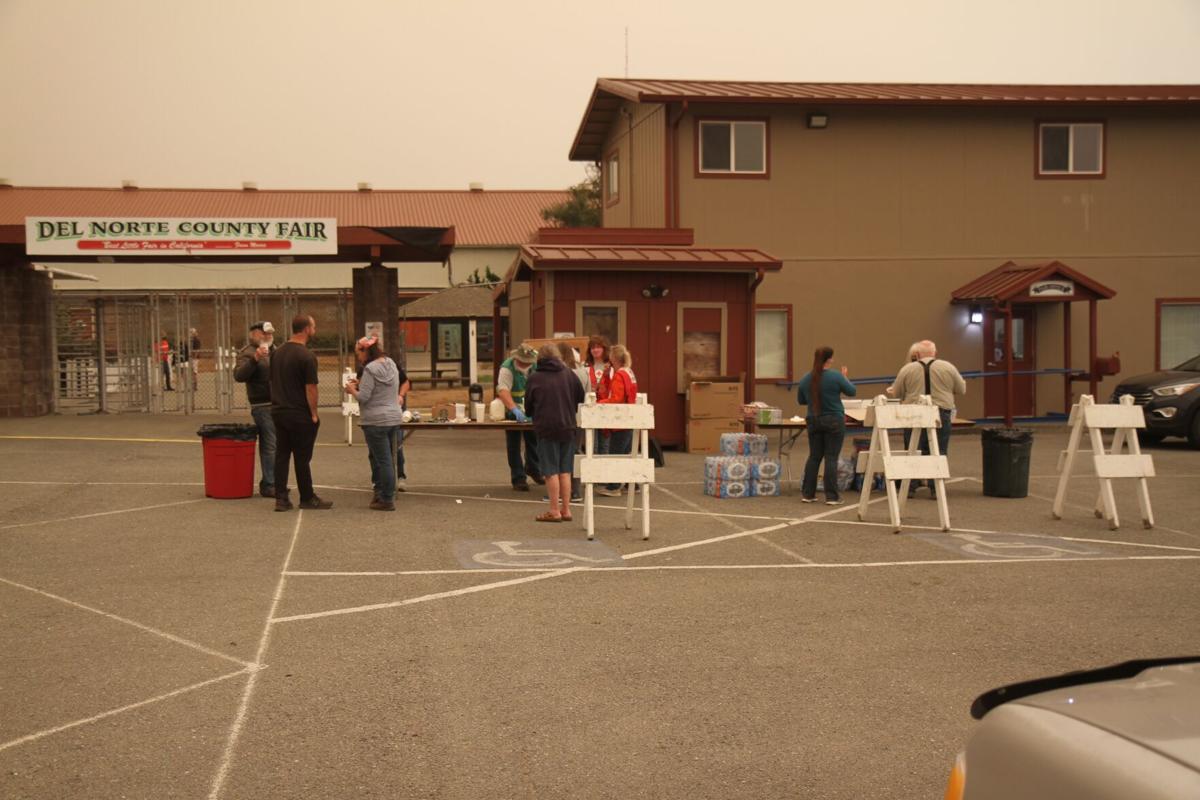 Gasquet residents Ken and Natalia Smith await news of what’s next for them after evacuating Wednesday with little more than their dog BB and cat Noodle.

Gasquet residents arrive Wednesday morning to the Del Norte County Fairgrounds in Crescent City after being evacuated due to growing wildfires.

Gasquet residents awoke Wednesday Sept. 9, to an urgent notice the California fires choking the air just the day before were now dangerously close to their town, forcing evacuations.

From the evacuation center set up at the Del Norte County Fairground, Barbara Conner, there with husband Rod, recounted having an uncharacteristic foresight the night before.

“I took the house phone into my room. I never do that at night,” Conner said.

At 6:30 a.m., she got the call to evacuate. Acting quickly, she went up the street one way and her neighbor Kim Black went the other, knocking on doors.

“My cell phone is always next to my head, because I’m OCD on my phone. I got two different phone calls from Emergency Services and Del Norte evacuating now. Then you start pounding on doors. I did the cop knock on their door,” Black said, pointing to her neighbors Ken and Natalia Smith now safely in the fairgrounds parking lot. “There were people who did not get phone calls or didn’t hear them.”

The Smiths were among those who didn’t receive a notice until Black came knocking. The Smiths were able to get out with dog BB and their unhappy cat Noodles, which Ken tried to keep calm wrapped in a blanket.

“Go,” Ken added about the only information they received. “I was asking everybody, how far? how much time? And they said, no, go now.”

“We were given no time to get out. We didn’t even grab our go bags or nothing, just get out,” Natalia said.

According to Del Norte County Emergency Services Manager Kymmie Scott about 600 Gasquet residents received a notice from the Del Norte Office of Emergency Services at about 6 a.m. Wednesday to evacuate. The fairgrounds had been set up as a temporary evacuation point. However, due to COVID-19 safety concerns residents were told to shelter in their cars if another option wasn’t available.

At the fairgrounds, volunteers with CERT and the local American Red Cross chapter provided fresh coffee, information, snacks, water and masks. The fairgrounds was also providing accommodation for large animals.

The OES lifted the evacuation order for the community of Gasquet at 11:30 a.m., Thursday, Sept. 10. Gasquet was put on a Level 2 evacuation order, meaning everyone in that community should be ready to evacuate again at a moment's notice. Gasquet will be open to residents only and U.S. Highway 199 will be closed at Pioneer Road.

Scott said this new fire — not the Slater Fire near Happy Camp — had overtaken the agriculture station and Oregon Mountain Road at about 7 a.m. She said because of the number of fires in the area, including Medford, Oregon, firefighters are engaged in life and property preservation only.

The communities of Hiouchi and Big Flat, about 11 miles southwest of Gasquet, remain on a Level One standby and should be ready to evacuate if needed.

According to Office of Emergency Services spokesman Bill Steven Steven said the fire as of noon Wednesday was five miles north of Gasquet. He told radio listeners that with so many fires already throughout California, resources are stretched thin and may not arrive to combat the local fire for another 24-48 hours.

Steven added that while it’s only rumors that Pacific Power may shut off the power, people should be prepared for that possibility. He added that the fire could affect utility equipment, forcing the company to shut off the electricity as a precaution.

As a further precaution, Steven said after speaking with Del Norte County Health Officer Warren Rehwaldt, all county residents should stock up on water, as a power shutdown could affect the supply of water to the community.

In response to the fires, schools were closed throughout the Del Norte Unified School District.

“Due to the evacuations in Gasquet and the standby situation in Hiouchi, due to smoke and wildfires, many of our students and staff are being affected, and school will be canceled for all students today,” the administration announced online.

The community was quick to reach out to those displaced.

Port O'Pints wrote on their Facebook page it will be providing pulled pork sandwiches and chips for the evacuees and first responders.

“We will also be donating a portion of all of our sales to help raise funds for those in need. If you would like to donate anything to help these folks, we'll have a cash jug set up inside the pub. Let's all come together and do what we do best —taking care of each other —cheers!” Staff wrote on Facebook.

Crescent Seafood Fresh Fish Market owner Kurt Hochberg and wife Terri wrote on their Facebook page about having to evacuate their home in Gasquet and setting up camp at the market. Heedless of their own situation, they promised to open on time and reduce their prices on fish tacos and prawn tacos two for the price of one.

“We cook with propane if the power gets cut. The grill keeps going,” Kurt wrote. “We will try to make the best of a really bad situation. See ya at the hot spot Crescent Seafood.”

Scott said Thursday firefighting personnel and aircraft resources remain stretched thin due to the large number of fires burning in the region but OES is working with the State of California and the Federal Government to bring more of these resources to the area.

Updated information can be found at: preparedelnorte.com and OES will also

provide links to the Slater Fire as they become available

Community meetings will be arranged by the United States Forest Service

and due to COVID-19 will likely be conducted in a virtual environment.

Del Norte County Office of Emergency Services urges community members to stay updated and informed with the links mentioned above and have a “go bag” ready to go with items you may need for yourself and your pets. If you have any questions, call the Slater Fire information line at (707) 464-0911.