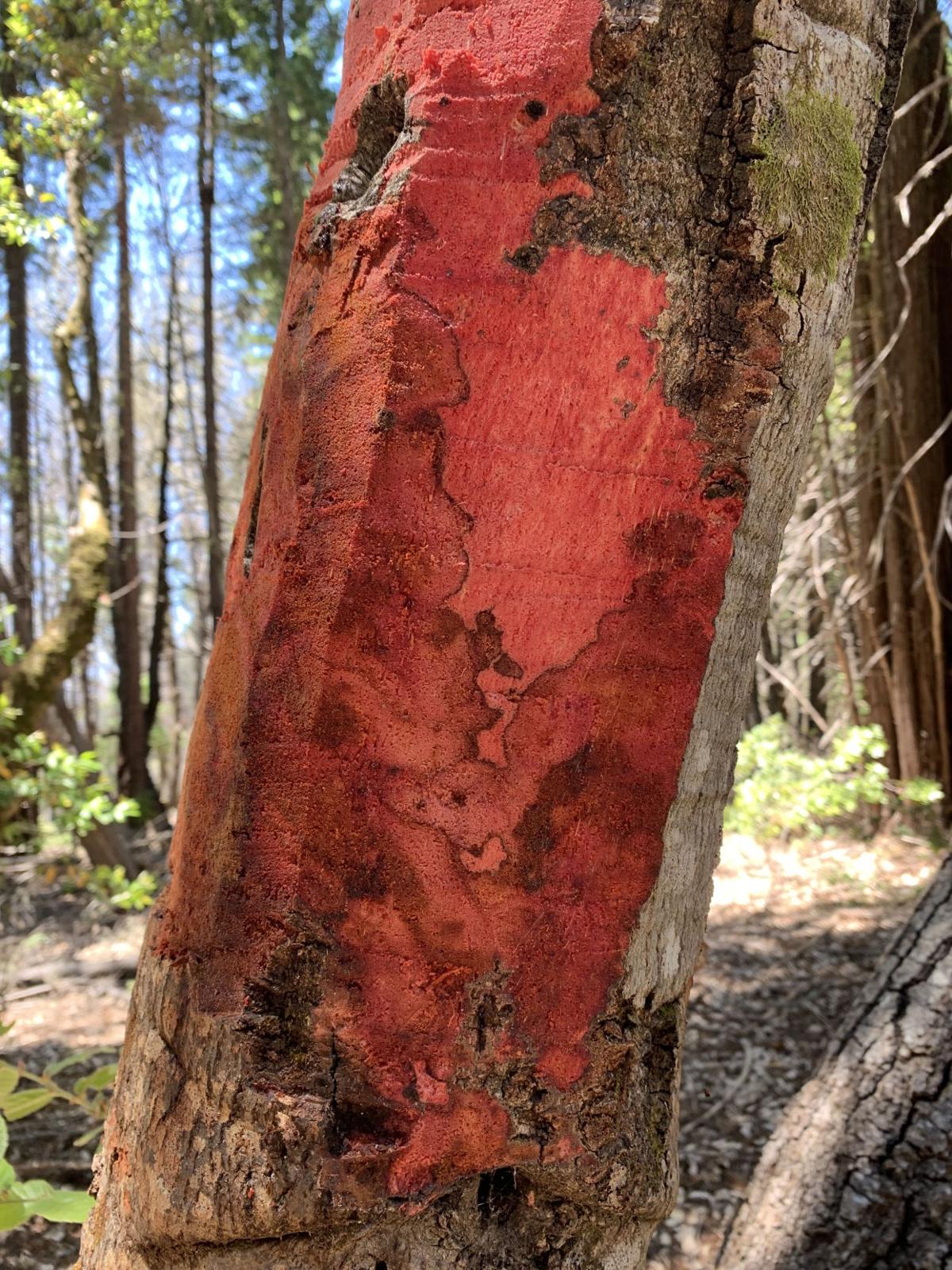 A tanoak tree, with its bark removed to show the deadly canker caused by Phytophthora ramorum. The red is the natural under-color of the tree. The black lines are the disease. 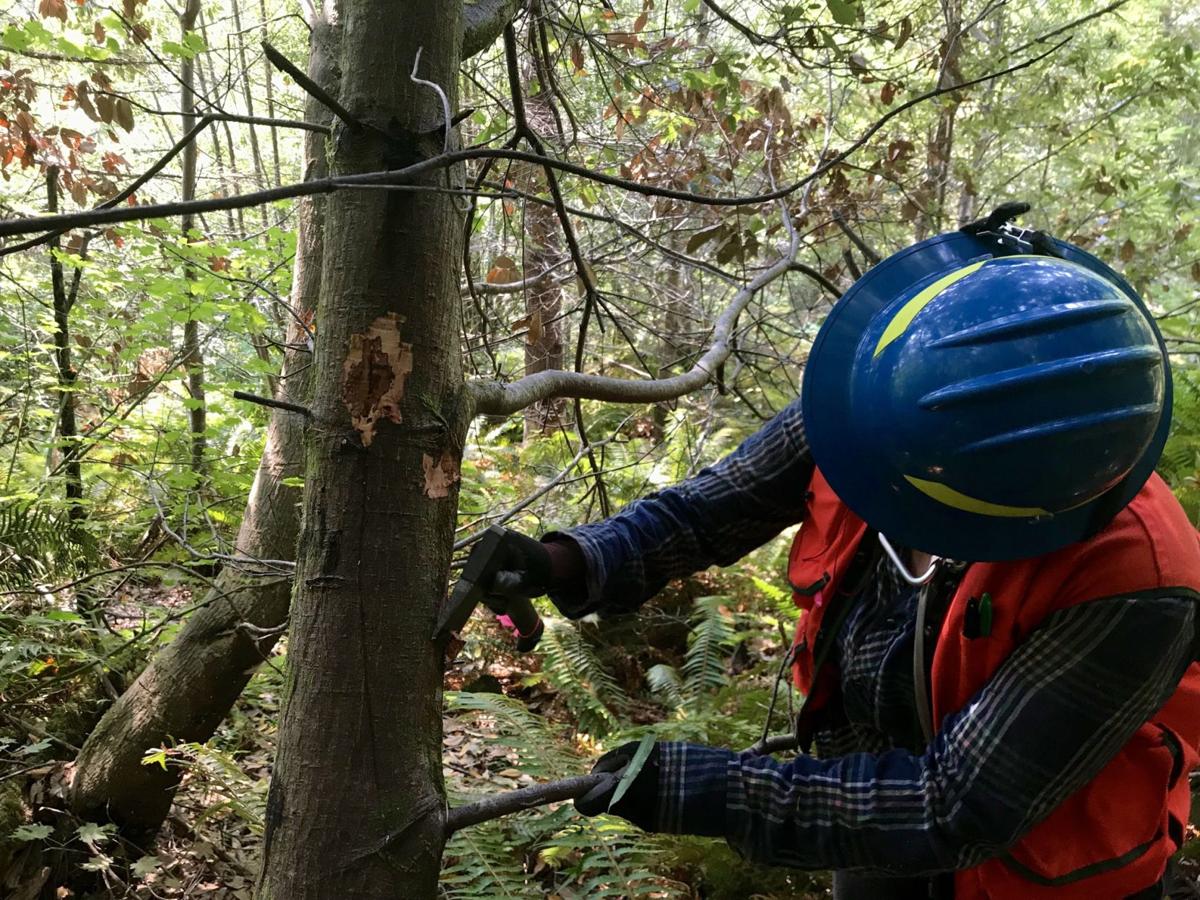 A tanoak tree, with its bark removed to show the deadly canker caused by Phytophthora ramorum. The red is the natural under-color of the tree. The black lines are the disease.

California officials have confirmed that the pathogen that causes sudden oak death (SOD) has been detected in Del Norte County.

The pathogen is a water mold that can kill oaks and tanoaks, threaten wildlife habitat and cause fire risk.

It was introduced to California on nursery stock from an unknown location in 1995, according to a sudden oak death economic impact study in February.

The following is a conversation about sudden oak death and its impact with Chris Lee, a forest health specialist with the California Department of Forestry and Fire Protection.

The Triplicate: Where in Del Norte County has SOD been found, and when and what damage has the disease done at this point?

Chris Lee: The pathogen that causes sudden oak death (Phytophthora ramorum) was detected from samples taken in July in Jedediah Smith State Park, about five miles east of Crescent City. So far, we have detected it on two small living tanoak trees. Additionally, two tanoak trees near the ones that tested positive have died. One was dead before the detection and the other has died since the detection.

I need to emphasize that two further rounds of sampling after the initial detection have failed to detect the pathogen again. Until we can confirm the positive detection with an official regulatory sample taken by the county agriculture department (acting as representatives of the California Department of Food and Agriculture), no regulatory actions will be take place, and we can’t speculate whether or how the pathogen will affect other trees in the vicinity.

It is fairly common to have difficulty detecting the pathogen during the warm, dry months of late summer and early fall, and we will continue our detection efforts throughout the upcoming winter and spring.

The Triplicate: Briefly, how was the disease discovered in Del Norte County?

Lee: The samples were collected as part of a UC Berkeley-led effort called a SOD blitz. For this effort, the Forest Pathology and Mycology Lab at UCB provides collection materials to samplers throughout the range of sudden oak death in California, then tests the samples that are sent back to them in order to help track the distribution and progress of sudden oak death in California from year to year.

For Del Norte County, the SOD blitz is the latest part of an effort to monitor the county for signs of the disease that dates back to 2004. Over the years, this effort has involved University of California Cooperative Extension, UC Davis, UC Berkeley, Cal Fire and the Del Norte County Agriculture Department.

The Triplicate: What is the overall concern about this disease and its impact, both environmentally and economically?

Lee: Environmentally, the disease can be responsible for a variety of landscape impacts that include wildlife habitat and forage loss, fuels and fire-risk problems, loss of traditional cultural resources such as tanoak acorns, aesthetic degradation, and other cascading impacts such as impairment of mycorrhizas (the fungi that form partnerships with trees to enable both partners to more effectively forage for nutrients).

Economically, the disease presents a variety of issues for plant-related industries, including restrictions on the movement of plant materials and soils. It also has the potential to decrease property values while increasing safety hazards for neighborhoods, homeowners and first-responders.

The Triplicate: How is this disease spread and what restrictions are in place to stop the spread?

Most current restrictions aim to prevent long-distance, human-mediated spread by requiring inspections and best-management practices designed to keep plant material clean and/or to keep infected plant material from leaving infested areas. These include both federal and state quarantines imposed on the 15 California counties known to be infested, on parts of Curry County, Oregon, and on nurseries across the country where infected plants have been found after shipping.

The Triplicate: We understand there is a detailed process of clearing trees with SOD. Please briefly explain that process.

Lee: There is no single management technique proven to eliminate Phytophthora ramorum from a forested landscape. Rather, a number of techniques to contain or suppress the pathogen have been tried. The longest-running one is in Curry County, where land managers cut infected trees as soon as possible after discovery, then remove susceptible host trees and shrubs within a radius that has varied in size over the years as the managers have learned more.

The cut trees and shrubs are burned. Other, shorter management trials in California have featured a variety of approaches, including some similar to Oregon’s, some that have more closely resembled a thinning to favor non-sudden oak death host trees and decrease humidity in the forest, some that concentrate primarily on removal of bay laurel (a key spreader of the disease), and some that aim to restore stands that have long been impacted by sudden oak death rather than to slow disease spread.

The Triplicate: What is the advice to property owners in Del Norte County about what they need to look for and what options they have if their trees are infested?

Lee: The latest information about sudden oak death, including photos of symptoms on most of the known plant hosts, tips on diagnosis, best-management practices and contact numbers for technical assistance, can be found at http://suddenoakdeath.org. For additional information about disease monitoring and management, landowners should check out the University of California Cooperative Extension Humboldt-Del Norte website at http://cehumboldt.ucanr.edu/Programs/Forestry/Sudden_Oak_Death/ and the UC Berkeley Forest Pathology and Mycology Laboratory website at https://nature.berkeley.edu/garbelottowp/?page_id=117.

The Triplicate: Does your agency offer free audits to help property owners see if they have this or any other tree disease?

Lee: Yes. I am available to visit properties to assess tree disease issues, and we have other forest health specialists in other parts of California that do the same thing. I can be contacted at christopher.lee@fire.ca.gov or at 707-726-1254. Additionally, UC Cooperative Extension Humboldt-Del Norte has experts who can do the same: http://cehumboldt.ucanr.edu or 707-445-7351.

According to the Sudden Oak Death Economic impact study, the first recorded infestation in Oregon occurred in Curry County in 2001, possibly - though not certainly - imported via nursery stock. The county is under a quarantine, according to Oregon Department of Forestry Forest pathologist Sarah Navarro.

“In Curry County, the disease spreads in the forests from infected tanoak canopies,” she said. “Spores are produced on the leaves and twigs of tanoaks, and spread during wind and rain events on the landscape. Phytophthora ramorum can also be introduced through infected nursery stock, such as rhododendrons and azaleas. The State of Oregon has a quarantine in place to prevent the movement of infected material from both forests and nurseries. The quarantine also requires management for SOD on private and state-owned lands.”

“The benefits were mainly from the reduced risk of international sanctions that would severely disrupt timber exports from the Port of Coos Bay,” she said.

“Importantly, the ecological and sociological costs and benefits of slowing the spread of the disease include cultural impacts to tribes, adverse impacts on aesthetics and related private property values, increased public safety risk and increased wildfire risk.”

Follow this developing story her online and in the Wednesday and Saturday print editions of The Triplicate.

Economically, the disease presents a variety of issues for plant-related industries, including restrictions on the movement of plant materials and soils. It also has the potential to decrease property values while increasing safety hazards for neighborhoods, homeowners and first-responders.