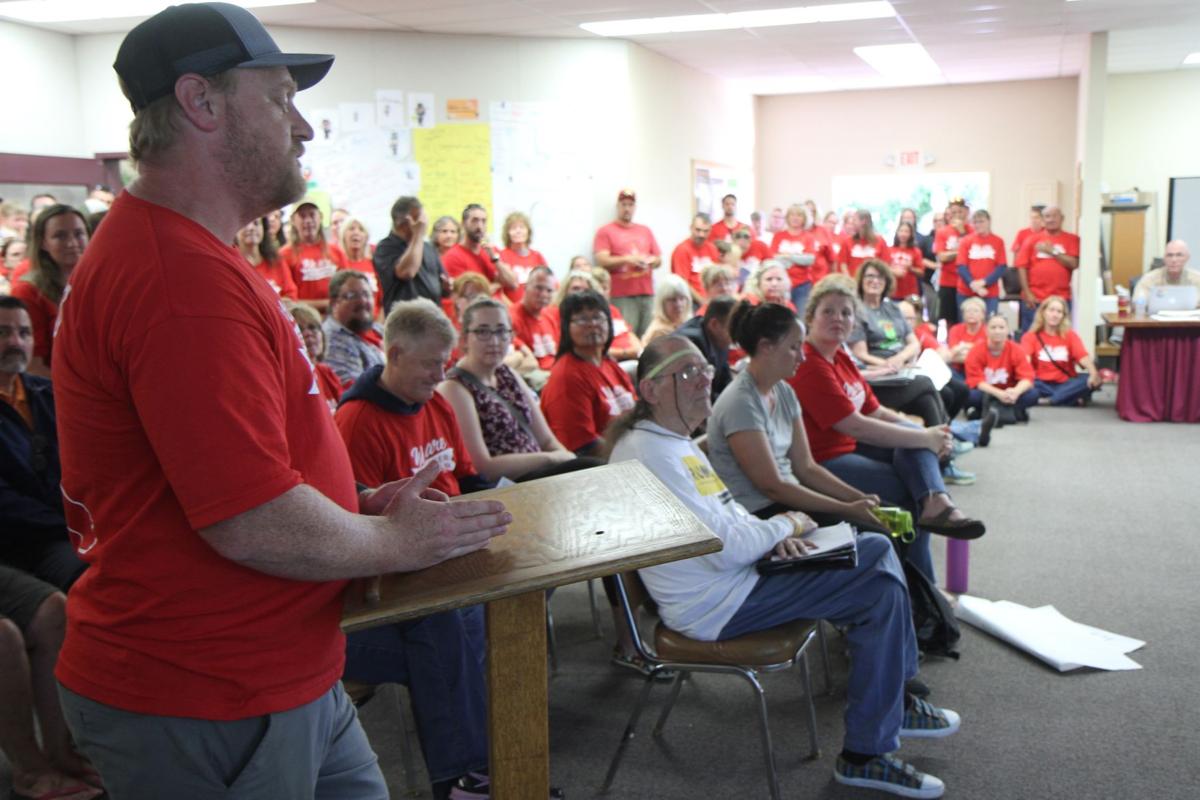 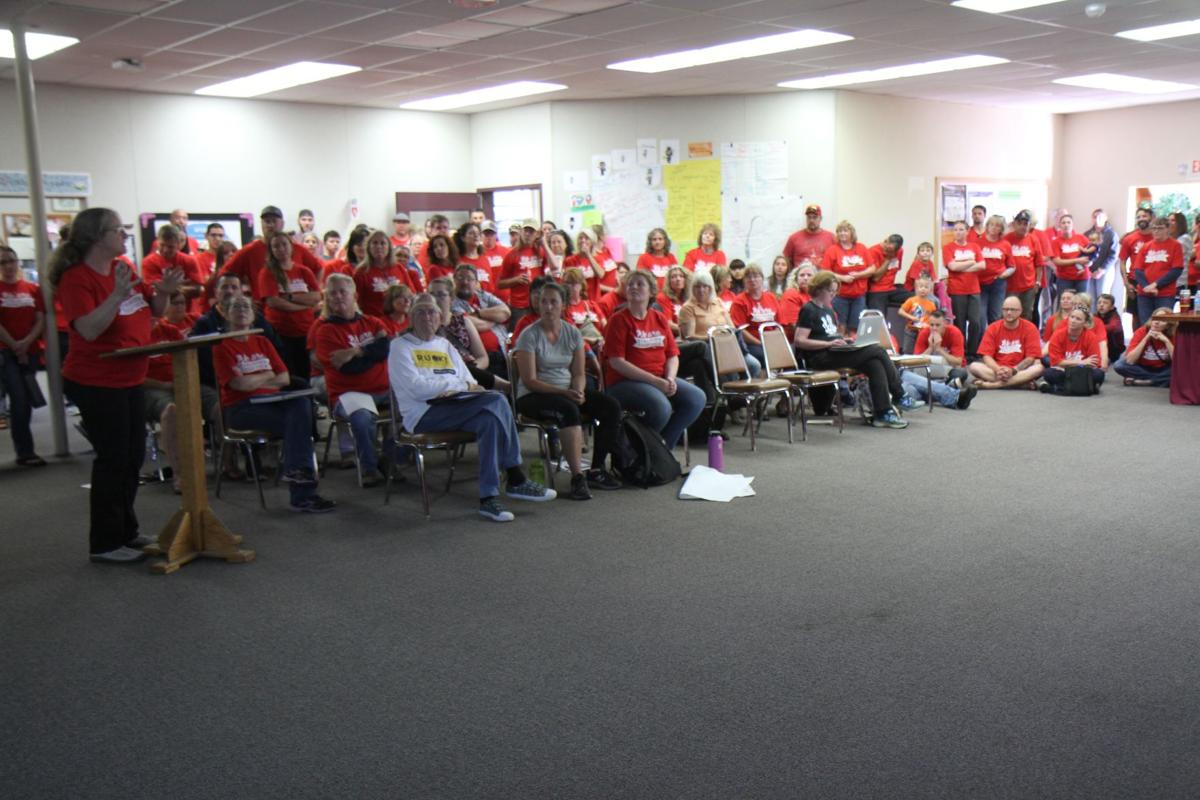 More than 200 teachers and others from the region attend the Aug. 22 Del Norte Unified School District Board of Directors meeting to encourage contract negotiations to restart.

More than 200 teachers and others from the region attend the Aug. 22 Del Norte Unified School District Board of Directors meeting to encourage contract negotiations to restart.

More than 200 teachers from California and Oregon attended the Del Norte Unified School District Board of Directors meeting Aug. 22 to make a collective, sometimes emotional plea to return contract negotiations to the bargaining table.

Wearing t-shirts imprinted #RedforEd, speaker after speaker shared personal stories of why they embarked on a career in education and deserved more from the district for their efforts.

After six months of negotiations and seven meetings, the Del Norte Unified School District remains firm on a one-percent increase to the teachers’ salary schedule.

Meanwhile, Del Norte Teachers Association members insisted their negotiators have proposed numerous compromises to no avail, leading both sides to agree June 28 to an impasse in their talks.

Patsy Shelton, a seventh-grade English teacher at Crescent Elk Middle School, said her 22-year-old son, Wyatt, is an entry-level firefighter for the California Department of Forestry and Fire Protection, doing seasonal work, and will make more money than she does this year.

“When I told him what I was doing this afternoon, he told me, ‘Mom, if they don’t think you’re valuable enough for a raise, they must not know what you do.’

“And I think he’s right, because he has come to my classroom and spent a whole day there,” Shelton said. “I put out more fires than he ever will.

“I learn the names, the personalities, the needs, the hopes and the dreams of 180 students. And I leave the classroom every day kicking myself when I didn’t meet the needs of a particular student. I carry that burden on my shoulders every day of my life.”

English teacher Miriam Wilson, a yearbook advisor and English Language Development instructor at Del Norte High School, put her feelings succinctly. “Think about this: 40-plus freshman, imagine it. And I’m worth one percent? That’s cruel.”

Music teacher Dan Sedgwick said all of the teachers put in long hours and sacrifice much. “Every teacher in this district works really hard, more than we’re expected to. I spend so many hours at school, my family rails at me, am I coming home for dinner soon?

“But nothing hurt my soul more than when I had to shut down my classroom at lunch time. That hurt. But when my union asked me to do that for two weeks, I did it, because this is worth it. We’re worth it,” Sedgwick said.

Dane Tippman, president of the neighboring Brookings Harbor Education Association, attended the school board meeting to lend his support to the Del Norte teachers. “I’m a proud product of Smith River Elementary School and a 2005 DNHS grad,” he said. “I brought a couple of people with me because we heard our brothers and sisters could possibly use our support.

“My message for you five people today, in addition to the messages that you have heard and will continue to hear, is that this is something you can fix. You have the power to make a change here.”

Board president Frank Magarino said following the meeting that it was frustrating listening to the teachers without being able to participate in a conversation. “It’s like listening to a one-sided argument,” said Magarino, “but it violates law, and we don’t want to give the impression of negotiating in public.

“We can fall into (California’s) Brown Act violations if we’re not careful.”

Marshall Jones, the Del Norte Teachers Association president, ran into the same predicament when he pleaded with board members to help settle the contract impasse by directing the district’s team to return to negotiations.

“You have the power,” said Jones. “They work for you, you don’t work for them.

“So, let’s have an action,” said Jones, “right now. We’re all here. Do I hear a motion to direct the district to go back to the table?”

When his call for a motion went unanswered, Superintendent Jeff Harris explained the potential conflict with the Brown Act. “You guys understand they legally can’t? That’s against the Brown Act. Even if they took a vote, it would be challenged in court,” Harris said.

He later explained that no one can ask the school board to add an agenda item without 72-hour advance notice, which assures the public is aware of what’s going to be discussed and can come prepared to offer comment, should they choose.

“If action is taken without that 72-hour notice, the legal remedy is potentially nullification of any actions,” Harris said. “We want to be careful and transparent, ensuring the public knows what’s going on.”

The next phase in the negotiation process is fact-finding, wherein both sides name a representative to present their case to a neutral third party.

Colleen Parker, the district’s director of human resources, said that following the fact-finding procedure, the third party can make recommendations. “They’re not binding, but it allows both sides to return to the table and negotiate around that recommendation,” Parker said.

“If they still don’t have an agreement, the union can vote to strike if they choose. The district would then unilaterally implement its last offer.”

Paige Thompson, the teacher association’s lead negotiator, said time is not on the district’s side, with the cost that the negotiating process imposes on local students.

“Six of the bargaining sessions happened last school year,” she said. “There are five negotiators, six sessions, that’s 30 days that you had teachers out of their classrooms, and 12 days they had high school administrators out of their schools to be on the district team.

“How many more days out of the classroom are you all willing to sign off on to get this contract settled?

“Keep in mind that even after we settle this, and we will, after this fall, this coming spring with this same class of students who will be out of our classrooms even more days to bargain for next year’s contract,” Thompson said.