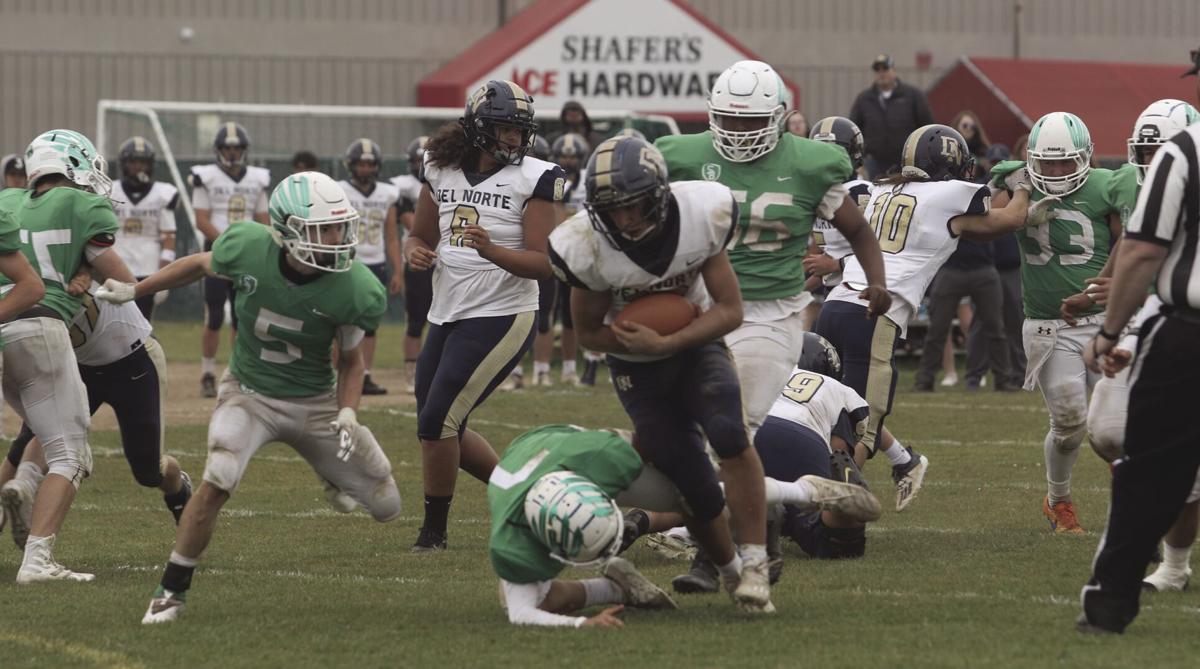 Caleb Dodson runs the ball during a season-ending win over St. Bernard. Dodson scored five touchdowns in the victory.

The Del Norte Warriors used a solid team effort to dominate in a season-ending win.

Caleb Dodson runs the ball during a season-ending win over St. Bernard. Dodson scored five touchdowns in the victory.

The Del Norte Warriors used a solid team effort to dominate in a season-ending win.

The Del Norte Warriors closed out a short spring H-DNL football season with an emphatic 59-19 victory at St. Bernard’s on Saturday afternoon.

A relentless running game paved the way to victory as the Warriors scored on their opening six possessions of the game and never appeared in danger of losing this one.

“As our last game of the season, we just went in there with the attitude that we were going to try harder on every single play,” head coach Nick White said. “We said to ourselves, let’s just go out and play as hard as we can.”

Junior running back Caleb Dodson led the way, rushing for five touchdowns to cap an outstanding individual campaign for the standout junior.

“That’s the thing that we tell them, that we’re going to be more physical than anybody else,” White said. “We pride ourselves on being physical and being smart.”

The good news for the Warriors — and the bad news for the rest of the league — is that all of them with the exception of Forkner will be back in the fall.

St. Bernard’s scored early on a Demetrius Rawson TD catch from quarterback Bode Joyner, but the Warriors responded in style, putting up 27 unanswered points to take control of the game, as they led 41-13 at halftime.

Dodson played a pivotal role in setting the tone, running the ball very effectively behind the dominating line.

With returning Big 4 Offensive MVP running back Levi Cox-Cooley suffering what turned out to be a season-ending injury in the opening quarter of the season four weeks ago, Dodson has filled in admirably.

And White believes the experience this spring will benefit him in the fall.

“He’s just very consistent,” White said. “We know what to expect from him every time he gets the ball. And he’s smart, and he’s got a really great attitude. We’re happy we’re going to have him back next year.”

He wasn’t the only standout from Saturday’s win.

In addition to Dodson’s big contribution, Andy Hunte scored a TD on a blocked punt return, while running back Mike Germain and quarterback Cooper Maxwell each also ran in for one.

Maxwell rounded out the scoring on a TD pass to Kaleb Price.

The win was particularly gratifying for the Warriors after suffering tough back-to-back losses against Big 4 rivals Eureka and Fortuna the past two weeks.

Del Norte closed out the season with a record of 2-2 and will graduate six seniors but will have nine returning starters on offense in the fall and eight on defense.

“Their experience, their leadership, their willingness to help the underclassmen was huge,” White said.

Should employers be required to terminate employees who refuse follow the government's mask and vaccine mandates or be tested each week?

Scientists looking for answers to climate impact along coast

Scientists looking for answers to climate impact along coast