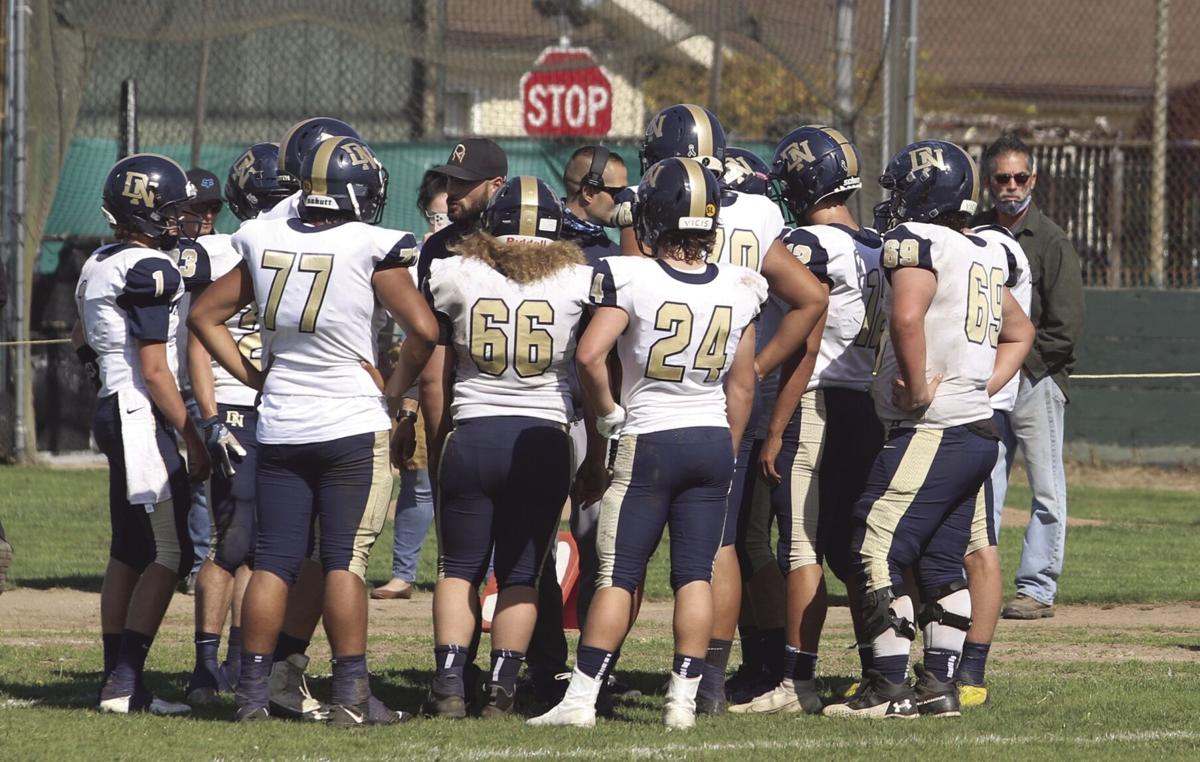 The two teams combined for six touchdowns in the third quarter alone, four of which came on the first play of drives, with the Warriors then holding on for a 32-27 victory after a scoreless fourth quarter.

“That was a tough game for sure,” said Del Norte head coach Nick White, whose team has now won three straight to go to 3-1 overall and 1-0 in the Big 4. “It was definitely a hard-fought battle.”

The Warriors barely saw the ball early in the game with just six offensive snaps in the opening quarter, and they trailed 7-0 after the home team set the early tempo with an impressive opening drive.

Del Norte, however, was just getting warmed up and responded with a pair of unanswered second-quarter TDs, both from Giancarlo Desolenni.

The first came on a 26-yard pass from quarterback Cooper Maxwell, capping a 95-yard, 14-play drive.

After a big defensive stand on the ensuing Crusaders drive, the Del Norte offense went to work again, quickly marching 34 yards to the end zone, with Desolenni scoring on a seven-yard TD run.

The Warriors led 14-7 at the break, but both teams were just getting started.

A wild third quarter featured six touchdowns, three from each team, including some big scoring runs.

Loftin found the end zone on runs of two, 10 and nine yards, while Wyatt Simoni scored twice for SB, on runs of 69 and 68 yards, and his teammate Demarte Prudhomme scored on a 62-yard run.

Loftin stepped up his game in the third quarter, taking on a bigger role after starting senior running back Caleb Dodson suffered a leg injury late in the first half and did not return.

As usual, Del Norte’s run game paved the way to victory, with several backs contributing behind another strong performance by a bruising line.

The Del Norte coach, meanwhile, was pleased with the way his players responded to the early challenges.

“They played hard the whole game and always believed,” he said. “There was a lot of adversity but we made the plays to win the game and that’s what matters.”

Desolenni also recovered a third-quarter fumble to set up Loftin’s second TD run of the period.

Afterwards, Tomlin praised Nick White and his brother Chris, who is also a coach with the Warriors.

“The White brothers are doing such a good job,” the St. Bernard’s coach said. “They’ve really got them rolling up there in Del Norte.”

Next up, the Warriors will host Fortuna (4-1 overall, 1-0 in league) in another Big 4 showdown on Friday night.

What have you been doing to stay safe from COVID-19 and its variants?