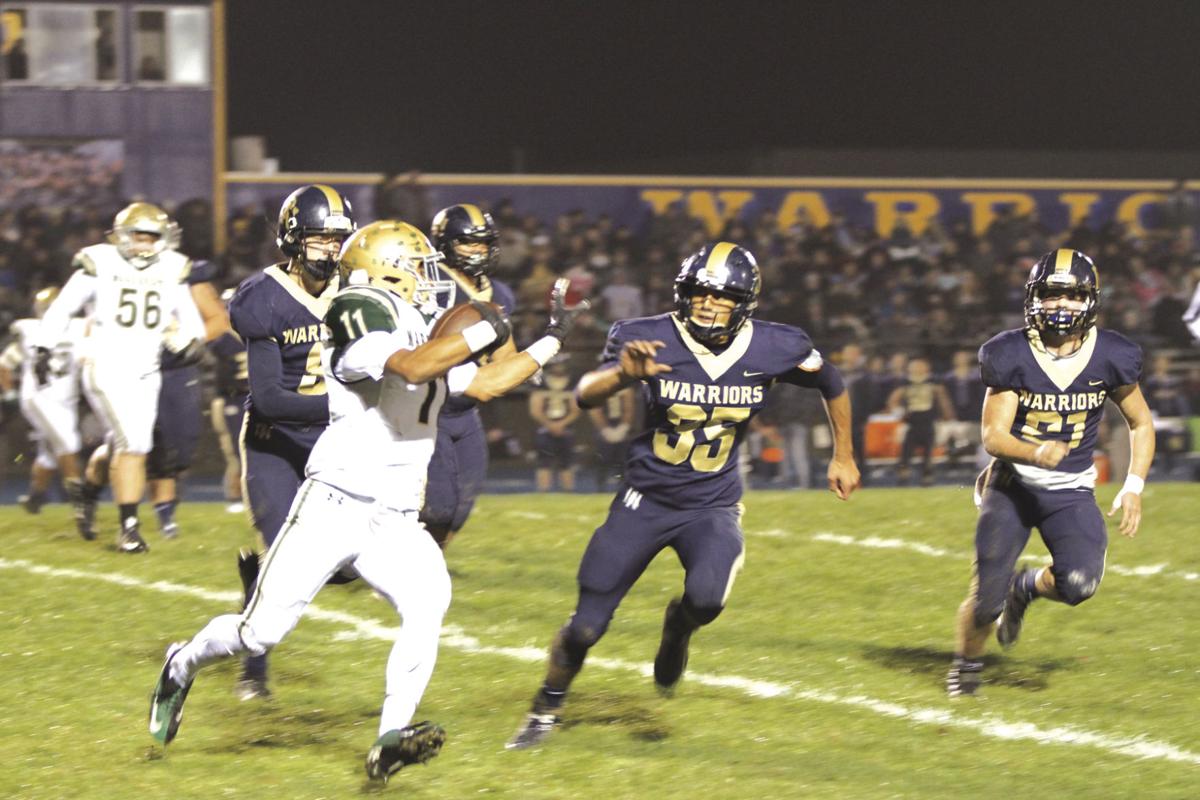 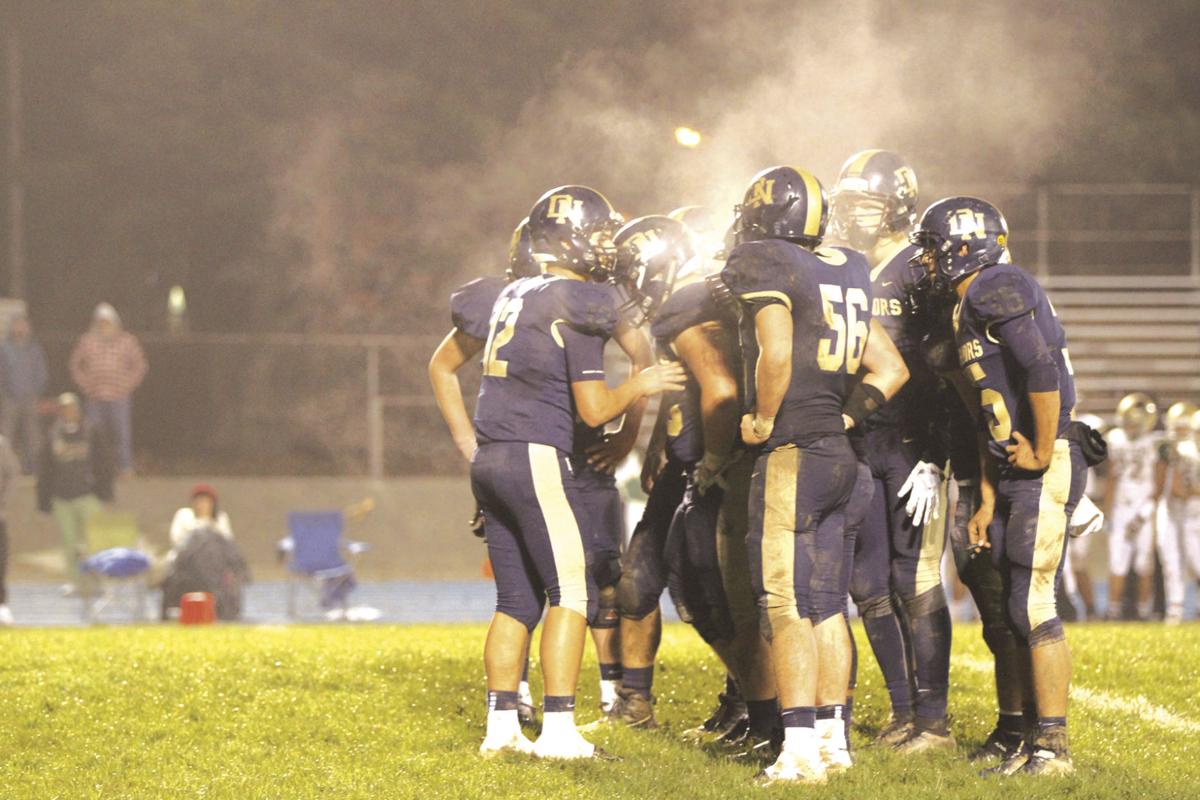 No, not on the Hayward High School field, where the Warriors will take on the Jets of Alameda with a title at stake.

No, he wants the surprise to come from the visitors’ bleachers.

“I hope we have more fans in the stands than they do, even though our fans are driving seven hours and the (Encinal fans are) about a half-hour away,” White said. “That would be pretty cool, pretty special.”

Those visiting fans - school officials are expecting at least several hundred - will be heading south hoping to see their Warriors do something perhaps no other Del Norte football team has done: Bring home a N-C-S title.

No. 2-seed Del Norte advanced to the championship game with a convincing 28-7 victory over No. 3 Moreau Catholic last Saturday. Top-seeded Encinal needed - literally - a last-second field goal to avoid overtime in a 24-21 win over fourth-seeded De Anza High School.

Both teams now are 10-1, with their only losses coming against highly successful programs on the road at midseason. Both captured conference crowns with unblemished records.

And both teams play defense the same way, according to White: “Tough.”

Encinal has given up a scant 8.6 points per game, with six shutouts this season. Del Norte’s defense is just a beat behind, at 10.5.

“They are super athletic and big up front,” said White, who was watching video of the Jets just hours after the Warriors’ semifinal victory. “Overall, they are physical and they are fast.”

So is Del Norte, with Luke King and Kai Baugh both at 250+ pounds up front, and inside linebackers Tanner Forker and Anthony Slayton able to play from sideline to sideline. Kobe Mitchell can play in coverage, or can rush the passer. Connor Long can play wherever he’s asked.

Offensively, Del Norte has the edge, at least statistically. The Warriors are averaging 36 points a game this season. In the past five games, four against playoff teams and one against Eureka, the Warriors averaged almost 33 points. During that same stretch, Encinal averaged 24.

What the Jets’ offense does do well is keep opponents off balance. Encinal’s yards rushing and yards passing are nearly identical.

“They run the ball well, and they have a couple of good receivers on the outside that make plays for them,” White said. “Their quarterback is a thrower; he doesn’t run much.”

Del Norte runs the ball often and effectively, with its three-headed monster of Mitchell, Chase Blackburn and Levi-Cox Cooley having combined this season for more than 3,200 yards on the ground, 8.2 yards per carry.

The Warriors would appear to have a slight edge kicking, too. Kenji Adams-Lee has averaged better than 35 yards a punt, about 10 yards more than either of Encinal’s punters.

Adams-Lee has missed just two of 50 extra points and nailed his only field goal attempt. Kevin Le of the Jets has made a more-than-respectable 29 of 34 PATs.

Del Norte gets a big break with the return of Eli Larson ... again. An all-conference lineman as a junior, the 240-pounder missed the entire regular season with a knee injury, but returned in the Warriors’ first playoff game against Alhambra, and was effective (until he was ejected from the game by officials, forcing him to miss the Moreau Catholic game as well).

“He gives us, honestly, so much more depth,” said White, who lost starting right tackle Trevor Freeman to a broken ankle early against Moreau Catholic, the third starting Del Norte offensive linemen out this season. “It’s great for a kid like (Larson) to come back. Plug him in where we need him.”

Another thing White has is the community’s support. And that’s been critical for the first-year head coach. “The community has been awesome with the success we’ve had,” White said.

“It’s a tribute to the kids, and how hard-working the community is.

“We’re hard-working, driven, put your head down, grind out what you need to do. We have a lot of success with that.

“Football is fun for these kids. But when the moment comes, they know how serious this moment is.”

Who are the key players in the Del Norte, Encinal football game?

The right-hander threw for 17 touchdowns and just one interception during the regular season. While his passing percentage is a pedestrian 52%, he throws a nice, deep ball with completions of 85, 73, 45 and 42 yards this season. He’s generally not a threat to run the ball.

As the season developed, Smith has been given more carries. He’s averaging 7.5 yards per carry, with six touchdowns. He also has nine catches out of the backfield.

Against De Anza in the semifinals, Cole rushed the ball 23 times for 110 yards and a touchdown. Four of his nine touchdowns this season came in the first game of the year.

The team’s leading receiver had five catches for 159 yards against De Anza, with a touchdown. He’ll also be used in the return game.

He was the team’s defensive player of the game eight times this season, with 7.5 tackles against De Anza. As a junior, he was named to the all-Bay Area team.

An active lineman on both sides of the ball, he had 2.5 tackles for loss in the semifinals. On defense, he has the speed to split double-teams, the strength to bull-rush the quarterback.

The junior leads the opportunistic Jets’ defense with six interceptions. He’s also 2-2 passing, with a touchdown.

Minor previously was the successful head coach at Balboa High in San Francisco, and at St. Mary’s in Albany, before taking over the Encinal program. He’s playing this season with a heavy heart, following the passing of his mother at mid-season.

He hasn’t been asked to throw the ball much of late, but is capable, having hit 56% of his throws for nine touchdowns and just three interceptions. He has six rushing touchdowns, all from inside the 5-yard line.

The team’s leading rusher (1,300 yards) doesn’t have blistering speed, but hits the hole hard and reaches top gear in a hurry. He’s second on the team in receptions, with 12. Also plays outside linebacker.

Nagging injuries have slowed Mitchell at times, but he still has 913 rushing yards and a team-high 15 touchdowns. On defense, he can play end or linebacker, with the strength to take on linemen and the speed to chase down receivers.

He had an incredible two-game stretch against Eureka and Alhambra, rushing for 449 yards and six touchdowns. He has been the team’s homerun hitter with TD scampers of 57, 34, 47, 26, 21, 15 and 41 (twice). Defensively, he’ll play either cornerback or linebacker.

A three-year starter at center (as was his brother, Ethan), King drives blocks as well as anyone in the region. He has the ability to move the pile, especially in short-yardage situations. Defensively, lines up inside and takes up space, often facing two blockers.

Often giving up 20 to 40 pounds to opposing defensive lineman, Forker uses technique and strength to win the vast majority of the battles. Defensively, the inside linebacker is quick to the hole and rarely misses tackles.

He’s a mirror image of Forker on the offensive line. Defensively, can and will play at all three levels, including safety in certain situations. Leads the team in tackles.

White moved up from an assistant following the retirement of Lewis Nova. Much of the coaching staff remained, including defensive coordinator Darren La Fazio. Brother Chris White is the Warriors’ offensive coordinator. Two other brothers are football coaches, including Jason White, head man at Eureka High.