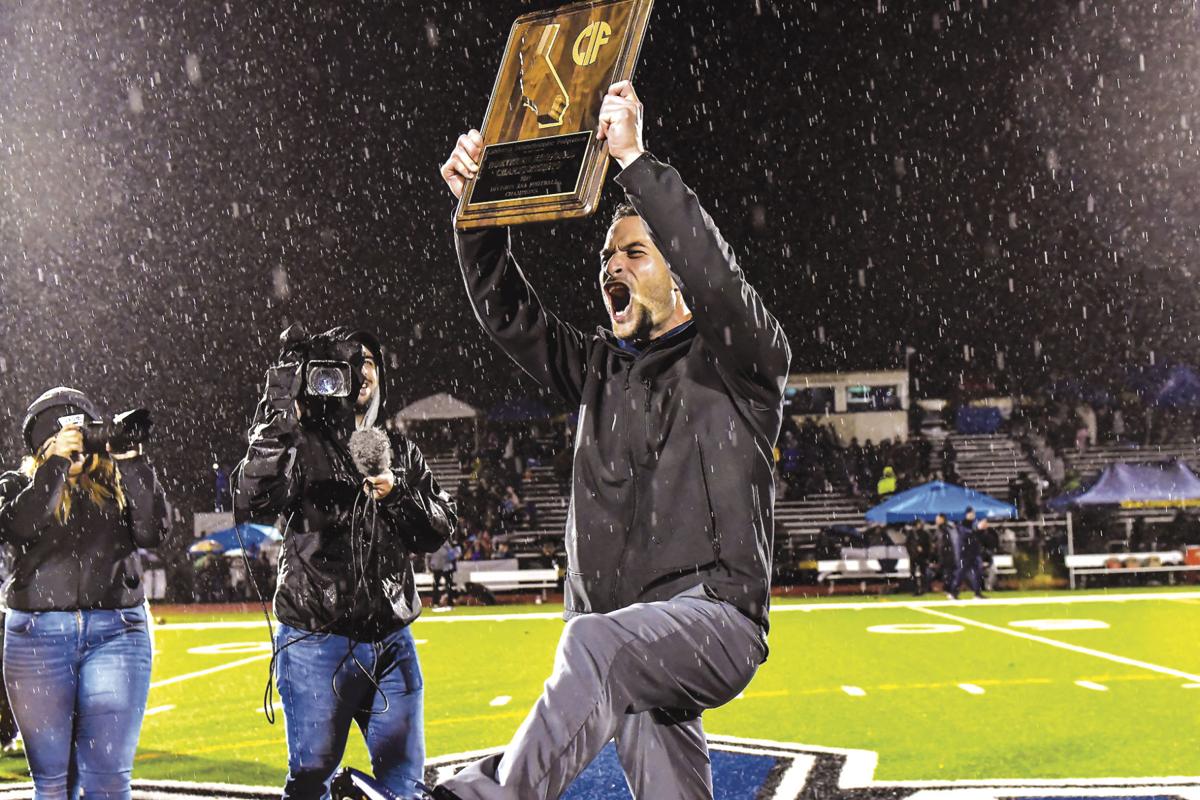 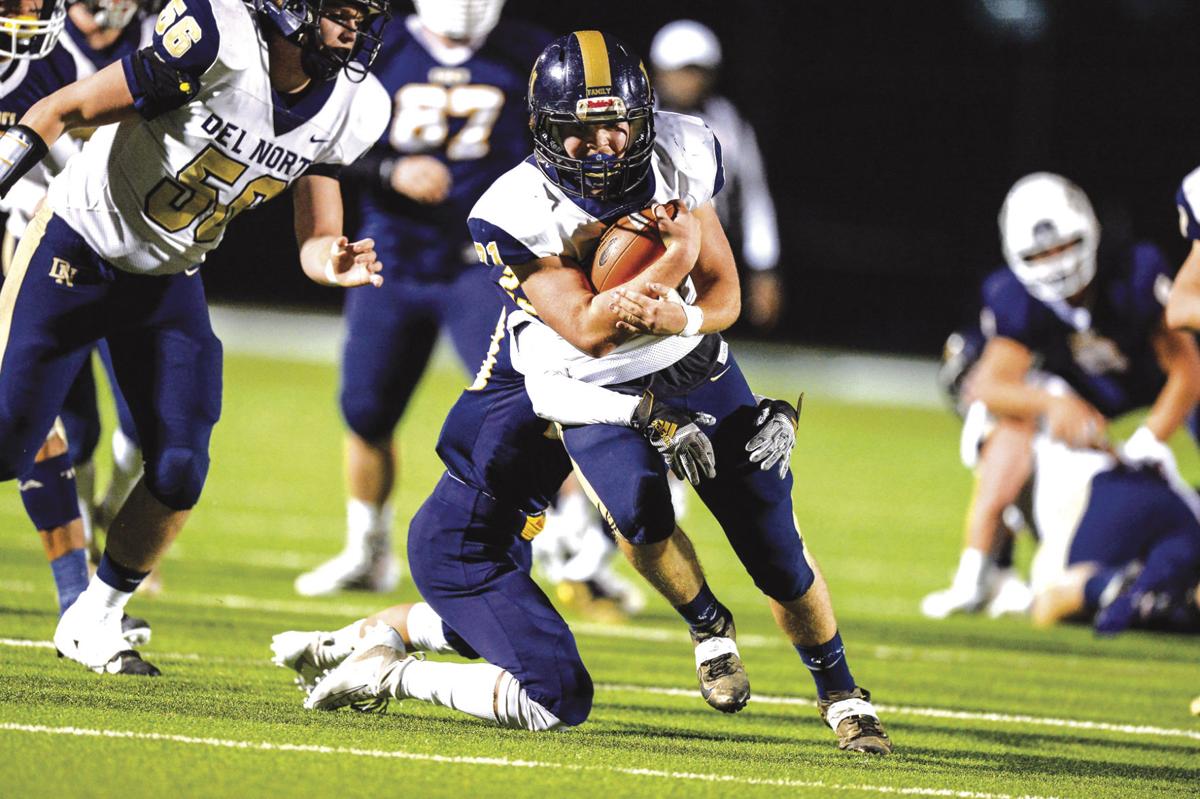 Del Norte High School senior Levi Cox-Cooley rumbles for 42 yards in the second quarter of Friday night’s NorCal championship game, leading the Warriors to a 21-14 victory over King’s Academy. Cox-Cooley had 157 yards rushing and a touchdown. 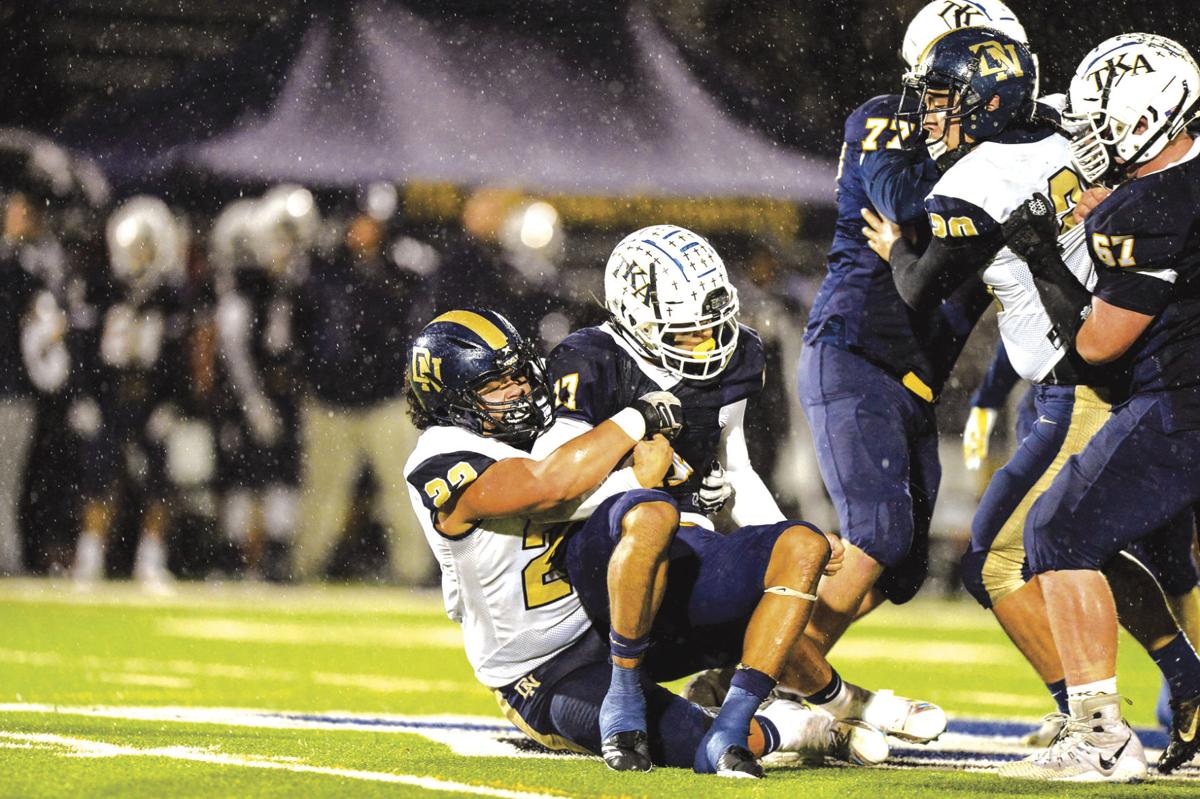 Del Norte High School senior Levi Cox-Cooley rumbles for 42 yards in the second quarter of Friday night’s NorCal championship game, leading the Warriors to a 21-14 victory over King’s Academy. Cox-Cooley had 157 yards rushing and a touchdown.

Del Norte High School may need to add a new trophy case to handle all the hardware this year’s Warrior football team has been collecting.

No Del Norte football team has ever reached the lofty levels this team has achieved. That said, there’s one more mountain to climb.

Undefeated El Monte High School is coming all the way from east of Los Angeles to Mike Whalen Field this Saturday to take on the 13-1 Warriors, with a Division 5-AA state championship at stake. Game time is 6 p.m.

The Warriors advanced last Friday despite some uncharacteristic mistakes, errors that set up both of the King’s Academy touchdowns.

Twice, Del Norte fumbled deep in its own territory. Twice, the private school turned those miscues into game-tying TD passes.

But when required later to move the length of the field, King’s Academy could gain no traction against Del Norte’s defense.

The Knights’ Noah Short came into the game averaging 8.1 yards per carry and 23.7 yards per catch. He finished with 4 yards rushing on 10 carries, and 4 catches for 46 yards.

King’s Academy’s Jayden Frazier had rushed for more than 1,000 yards this season. Del Norte’s defense limited him to 6 carries for -1 yard.

Meanwhile, Del Norte’s rushing attack was not only effective, it was relentless, with the Warriors rushing 52 times for 232 yards.

Levi Cox-Cooley was the workhorse, carrying the ball 29 times for 163 yards. Kobe Mitchell had 15 carries for 53 yards, joining Cox-Cooley and Chase Blackburn in rushing for more than 1,000 yards this season.

King’s Academy never threatened again. The Knights’ Short carried the ball twice in the fourth quarter, losing 5 yards both times. Quarterback Antonio Gonzalez - who had been reasonably effective throwing the ball in the first three quarters - went 2-for-7 for just 7 yards in the final stanza.

Afterward, CIF officials presented the honors to Del Norte in the center of the King’s Academy field, as the team gathered with parents and fans for pictures.

Earlier in the day, they had learned that with a victory, the Warriors would be playing at home for the state championship.

El Monte does play on a grass field - although it’s unlikely the Lions have seen anything like Mike Whalen Field, especially after the several days of heavy rain predicted for this week.

Despite the wet weather, school officials are expecting a packed house for Saturday night’s game. Tickets will be available online at www.gofan.com until 5 p.m. Thursday. Thereafter, they’ll be available only through the CIF website and at the gate.

The cost will be $12 general admission, $8 for students and senior citizens.

The game will be broadcast live on KPOD 97.9 FM.

What are your thoughts on enforcement of government rules about wearing a face mask because of COVID-19?

Please choose the option that best reflects your opinion.

It’s wildfire season: What you need to know about air quality